The new #KeepTheLightsOn campaign will see pubs in Ireland and Northern Ireland switch their Christmas lights on simultaneously on Friday, November 20. 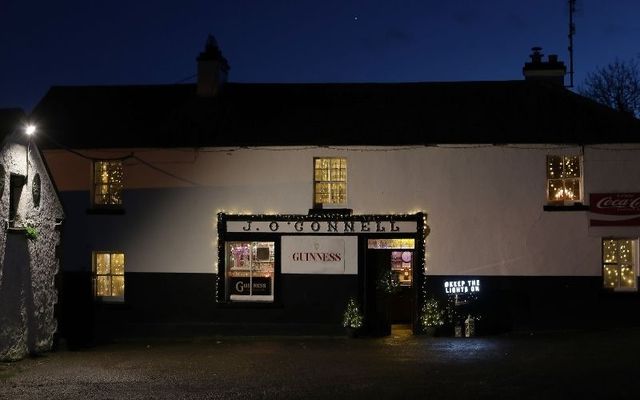 J O'Connell's in Skryne Co. Meath; the pub from the iconic Guinness Christmas TV ad has been lit up in its festive best. Guinness, YouTube

Pubs across Ireland and Northern Ireland will come together on November 20 to simultaneously switch on their Christmas lights and highlight their readiness to safely reopen during the COVID-19 pandemic.

The Licensed Vintners Association (LVA), Vintners Federation of Ireland (VFI), and Hospitality Ulster have joined forces with Guinness's Raising the Bar to launch the #KEEPTHELIGHTSON campaign at 5 pm locally on Friday, November 20.

As part of the campaign, pubs are turning on their Christmas lights early ahead of the crucial Christmas period in a bid to highlight how important local pubs are in Irish society in addition to highlighting the struggles that publicans, bar-staff, and their families are facing in their attempts to keep the lights on during the coronavirus pandemic.

Pubs across Ireland have installed safety measures in order to comply with the Irish Government's COVID-19 guidelines, but one-third of Dublin pubs have remained closed continuously for eight months, while 50% of pubs across the country have been open for just two of the last 37 weeks.

As part of the #KEEPTHELIGHTSON campaign, eight "beacon" pubs across Ireland have already been lit up by the finest festive decorations thanks to support from the Guinness Raising the Bar fund.

The eight pubs, which are scattered throughout the island of Ireland, will feature in a short film that premieres on Thursday, November 19, and encourages the public to show their support for the safe reopening of pubs by posting photos of their favorite pub lit up for Christmas alongside the #KEEPTHELIGHTSON hashtag.

This film will premiere on Guinness, LVA, VFI, and Hospitality Ulster channels and can be viewed here.

Guinness #RaisingTheBar joins @LVADublinPubs, @vfipubs & @hospulster to launch #KEEPTHELIGHTSON, which will see pubs across Ireland come together & switch their Christmas lights on this Friday at 5pm.

Share a photo of your local lit up for Christmas with #KEEPTHELIGHTSON pic.twitter.com/uJpCzJNvj1

Speaking at the launch of the campaign, VFI Chief Executive Paul Cribben said: "Pubs around Ireland have invested heavily in ensuring their outlets are ready to reopen safely, with almost 50% of publicans having borrowed as much as €16,000 since March—one in five as much as €30,000.

"Now all that these locals around the country want is the chance to reopen safely on time for Christmas."

Meanwhile, Donall O’Keeffe, CEO of the LVA, said that the campaign was crucial for the future of pubs around Ireland.

"Before the Covid-19 pandemic, 6 out of 10 people typically visited their local pub at least once a month. As part of this joint campaign with the Guinness Raising the Bar fund, we hope that the public will also show their support for a safe reopening of their local as we enter a Christmas period that will be decisive in keeping the lights on in pubs around Ireland."