Who was responsible for The Troubles? Liam Kennedy examines the era

Liam Kennedy examines the history of major organisations involved in the Troubles in his book "Who Was Responsible for the Troubles? The Northern Ireland Conflict." 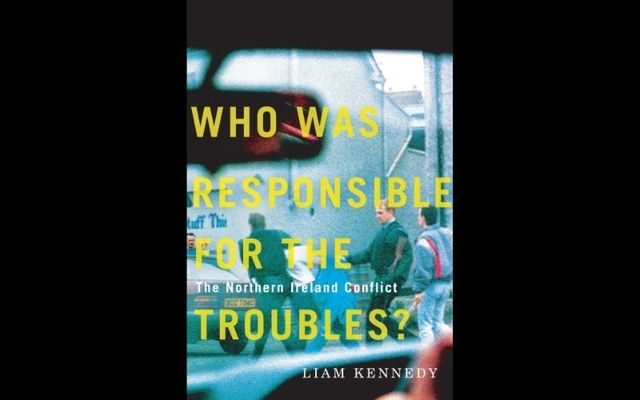 It is the most frightening question of all: Who was responsible for the Troubles? Who drove the conflict onwards, year after year, until the death toll reached almost 4,000 and more than 45,000 were injured in Troubles-related incidents, some horribly so?

Examining in turn the history of the dozen or so major organisations involved in the Troubles – from the British Army to the Official IRA and Loyalist paramilitaries – author Liam Kennedy comes to the clear conclusion: The organisation primarily responsible for the “Three Decades of Terror” was the IRA, aided by its political wing Sinn Féin.

The following is an extract from Liam Kennedy's "Who Was Responsible for the Troubles? The Northern Ireland Conflict"

The “Troubles” is the somewhat euphemistic title for three decades of armed conflict in Northern Ireland. This book started off in a small way in 1999, the year after the signing of the Good Friday Agreement, which set a formal end to hostilities and promised new political beginnings. It was sparked by a curious incident that is explained in chapter 1, but, to cut to the chase, the central question I am posing is a deeply disturbing one, indeed one which most of us would prefer to avoid. It is this: who was responsible for the Troubles? When I gave a preview of the thesis some ten years ago a young woman in the audience, almost beside herself with agitation, burst forth, “You are a disgrace. Are you really employed by a university? I can’t believe it.” Her reaction, and that of some others, did not encourage me to rush to publication.

The early chapters discuss the role of the British and Irish states during the Troubles, though the major focus is on nonstate actors such as civil rights campaigners, the Official and Provisional IRAs, loyalist paramilitaries, Paisley and Paisleyites, the Democratic Unionist Party, and the churches. Which collective historical actor, if any, was primarily responsible for staging thirty years of intense conflict? The term “responsibility” is of critical importance, so it is as well to specify its meaning as employed here. The criteria invoked to establish responsibility included the following: those held to be responsible must have been committed to using violence to advance a political agenda; they must have been responsible for a significant share of the killings and wounding; they must have been prepared to use violence in the long term, irrespective of popular opinion; they must have had command of the resources – people, armaments, budgets – to engage in such protracted conflict. Both state and non-state actors come into the frame.

Many of the themes in this volume speak to a wider world. In a very real sense, the Troubles is a world-class problem in miniature. The Black North went global in the later twentieth century, attracting disproportionate international academic attention. Ironically, one of the unintended consequences of the Troubles was an efflorescence of Irish studies at home and abroad.

The decades of conflict in Northern Ireland were characterized by national, ethnic, and sectarian passions – the hallmarks of a deeply divided society. Parts of the contemporary world are disfigured by similarly divisive forces. Multiculturalism may be fashionable, national conflicts may be less prevalent, peace processes may be in train, but that is only part of what is a largely Eurocentric story. Even within Europe, ethnonational tensions still simmer in Belgium, Spain, the Ukraine, the Urals, Macedonia, and the Balkans. Symbols, language, culture divide as well as unify. Beyond Europe but touching Europe also, the rise of Islamist extremism has brought politico-religious terror in its wake. There are many dissimilarities of course, but Northern Ireland in the later twentieth century, far from being an outlier or a throwback to the religious wars of the seventeenth century, finds its place all too easily within the modern world.

The Troubles are often conceived in terms of the headline events, the bombings, the killings, funerals, imprisonment, and hunger strikes, as in the first two chapters of this volume. But this is an impoverished agenda. To redress the balance and to aim for a more holistic account, two further chapters are devoted to a rebarbative aspect of the Troubles, that is, the practice of paramilitary “punishments” which is sometimes dignified with labels such as “informal policing” and “informal justice.” The scale and severity of these attacks – orange-on-orange and green-on-green violence – has been largely obscured, in part because there has been so little media coverage down the years. To take but one example, Ed Moloney’s A Secret History of the IRA is regarded by many as a brilliant achievement, and rightly so. A fine sense of history informs the narrative. It is psychologically acute, and the writing has the momentum of a good thriller. There are many insights and revelations, especially in relation to the “high politics” of Sinn Féin. Gerry Adams, the long-time president of Sinn Féin (who was “never a member of the IRA”) emerges as an orchestrator of genius within the theatre of republican intrigue and is never far from center stage. This undoubtedly gives the work coherence but at a cost. While my admiration for A Secret History remains undiminished, I have to say the approach misses out great swathes of IRA activity, quite possibly the most common forms of activity for so many IRA volunteers. There is only a single paragraph, that on page 153, mentioning paramilitary beatings and shootings in a book that is more than 700 pages long. Loyalist “policing” and intra-community terror, if anything, has received even less attention, yet these activities were intrinsic to the conduct of the Troubles.

For many republican volunteers, their active service was that of maiming fellow nationalists, particularly so from the mid-1970s onwards. The same was true on the loyalist side where brute force also ensured neighborhood compliance. Perhaps we need to reorient our understanding of the Troubles in some basic respects, particularly as to understanding the relative autonomy of social enclaves within society under conditions of conflict. Patterns of fear and terror persisted, and still persist, long after “peace” has been declared. More rounded treatments of the recent past would integrate the “Troubles from below” into the grand narrative. As also argued, social scientists (less so journalists and writers) tend to underestimate the degree of power over people’s lives exercised by paramilitary organizations at the neighborhood and community level, perhaps because of a disciplinary tendency to fetishize the powers of the state as well as a reluctance to delineate the limitations of state agencies.

On the twentieth anniversary of the signing of the Good Friday or Belfast Agreement of 1998 many commentators expressed surprise that the degree of polarisation in Northern Ireland was as pronounced as it was back then. If anything the spirit of mutual accommodation was weaker. Yet there had been two decades of relative peace. What could have gone wrong? Political scientists naturally parsed the various agreements, from the Belfast Agreement onwards, and made varying, often conflicting diagnoses. Perhaps it was the architecture of the agreements, perhaps it was their implementation (or non-implementation), or perhaps it was the indifference of London and Dublin. The list goes on, and some of the explanations presumably have some validity. But the burden of the thesis developed here is that more fundamental problems beset the peace process. It is necessary to go to a deeper level.

The final chapter explores briefly, perhaps too briefly, ideological evasions, issues of conscience and the possibilities of atonement. The guiding principle, which is much influenced by varying European experiences in the aftermath of World War II, is that without an honest acknowledgment of the ugliness of the decades of terror, the possibilities of reconciliation across the communal divide in Northern Ireland are limited. If we look at present-day Northern Ireland, there is a (relative) absence of violence, what might be called a “negative peace,” but this is not a society at peace with itself. What we have is an unstable equilibrium, the outcome of competing communal demands on the part of the two major ethnonational blocs in the North.

In the end, in seeking release from the past, we come back to responsibilities, which include the making of responsible history. But engaging critically with one’s own culture and taking responsibility for its sour fruits is about as painful as a barefooted ascent of the stony slopes of Croagh Patrick or one of the other holy mountains of Ireland. Fifty years after the outbreak of armed hostilities, is it not time to face the mountain?

You can learn more about "Who Was Responsible for the Troubles? The Northern Ireland Conflict" by Liam Kennedy here.