From the Giant’s Causeway, to Carrick-a-Rede Rope Bridge there are some seriously amazing things to see in this county. 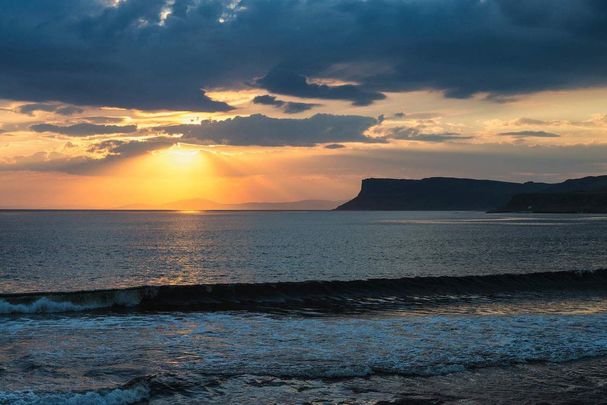 The sun set at Ballycastle, in County Antrim. Tourism Ireland.

Antrim, the county that can claim Belfast, Liam Neeson and many filming locations for HBO’s “Game of Thrones” is jam-packed with super tourist attractions, incredible geological marvels, fascinating history and breathtaking landscapes.

Located in the northeast of Ireland, in Ulster, Antrim offers amazingly diverse attractions from the Glens of Antrim, to the 60-million-year-old Giant’s Causeway, to Bushmill’s Whiskey to Belfast and the Titanic. The choices are endless.

Here are just five of the most popular attractions in County Antrim right now. 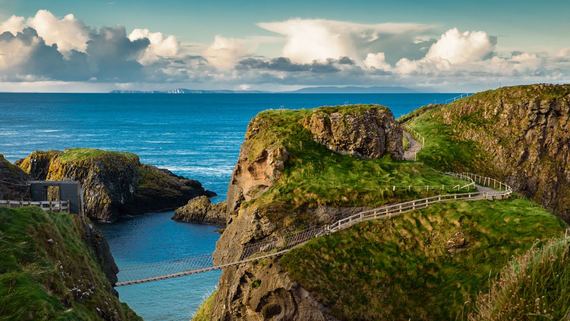 The Causeway Coastal route is a designated driving route between the cities of Belfast and Derry with nine shorter scenic drives to explore. The route is 120 miles long and links to the Wild Atlantic Way at Derry and to the Mourne Scenic Route in Belfast.

Start your journey in Belfast and follow the coast road through the nine Glens of Antrim, winding between picturesque villages and unforgettable scenic locations, including Rathlin, Northern Ireland’s only inhabited offshore island, and Binevenagh with its dramatic cliffs. The route peaks at the Giant’s Causeway on the North Antrim coast, before continuing west toward the walled city of Derry.

The landscape is varied from seacoasts to mountain tops, from busy cities to sleepy hamlets and coastal harbors. To experience the drive in a relaxed manner, giving yourself enough time to visit several of the major attractions and explore one or two scenic drives you should allow yourself three to five days. Having said that it is possible to drive it in a day if that is all the time you have.

Antrim Castle Gardens are an absolute gem. These 400-year-old gardens have recently undergone a $7.2 million restoration project to preserve the historical site for generations to come.

Antrim Castle Gardens features a network of formal and informal visitor experiences, building on the existing parkland with several notable restored, new and ornamental gardens. Strolling through the grounds is like walking into the past: you will come across features such as the Large Parterre, Her Ladyship’s Pleasure Garden and Yew Tree Pond.

At the heart of the Gardens is a unique visitor experience and the refurbished Clotworthy House. While there you could also visit the Garden Heritage Exhibition where you can gain insights into the history of the gardens and the story of the Massereene family. Also on site is the light-filled Oriel Gallery, which plays host to a range of stunning exhibitions throughout the year. 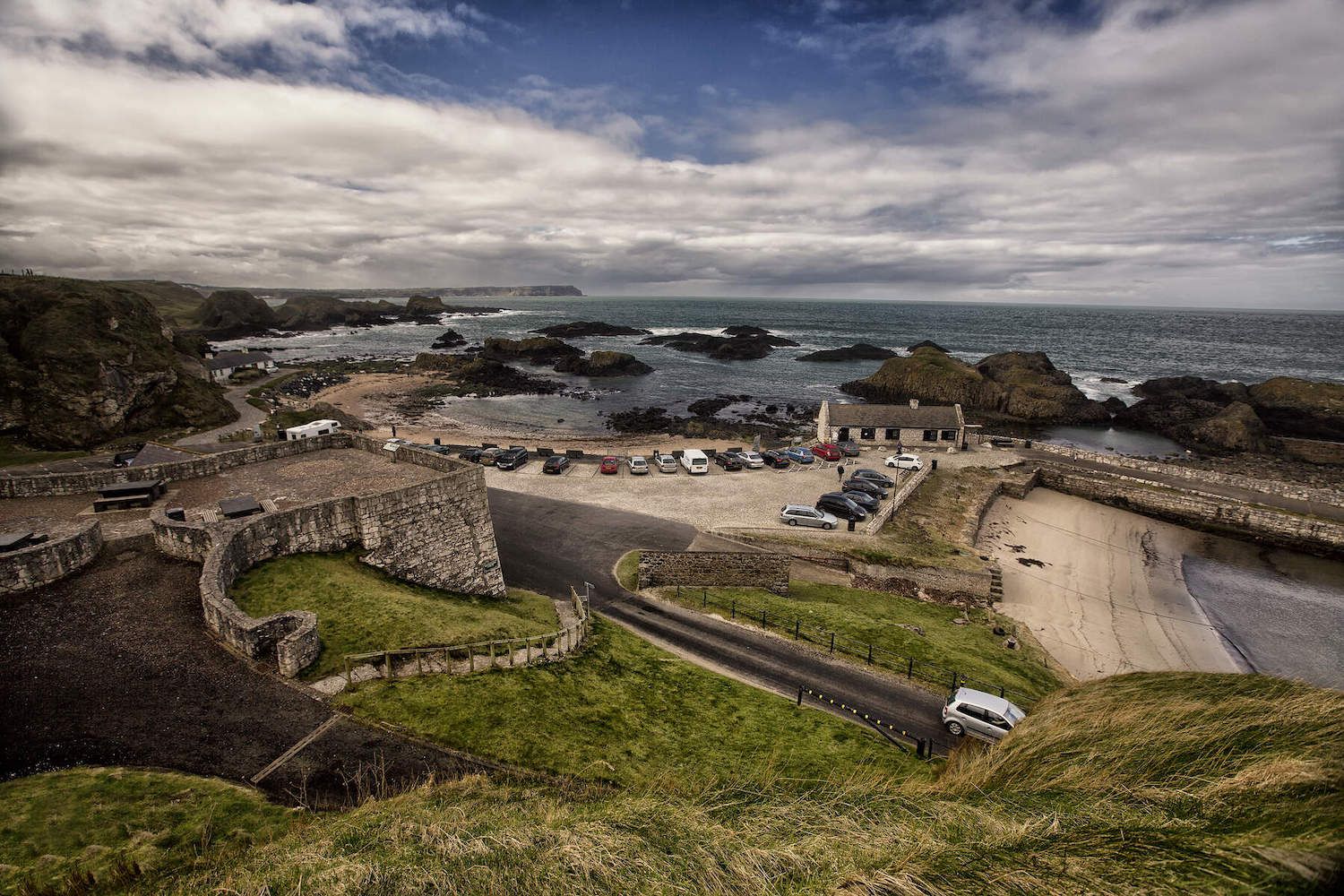 If you’re looking to capture the true sense of Irish rural life then Ballintoy is a must, especially if you’re traveling along the coastal route.

The historic and picturesque village and its harbor are located 17 miles north-east of Coleraine and five miles west of Ballycastle. The small fishing harbor can be found at the end of a small, narrow, steep road down Knocksaughey Hill, which passes by the entrance to Larrybane and Carrick-a-Rede Rope Bridge.

The village itself has a charming array of small shops, two churches, including the quaint white Ballintoy Parish Church on the hill above the harbor, as well as tourist accommodation, restaurants, commercial and social facilities.

And of course…the town has been made famous by “Game of Thrones.” The harbor was used as the location for exterior Pyke shots and as the Iron Islands. 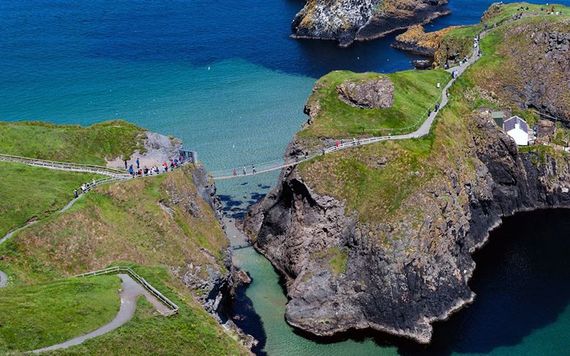 Carrick-a-rede Rope Bridge can be found near Ballintoy. The rope bridge links the mainland to the tiny island of Carrickarede, the “rock of the casting.” The bridge spans 20 meters (65 ft) and is 30 meters (100 ft) above the rocks below. Despite being pretty scary to cross, the bridge, which is open all year round, is one of the area’s top attractions. Traditionally the bridge was used by fishermen who used it as a route to check their salmon nets.

The area is also a wonderful spot to take in the local flora and fauna including birds such as fulmars, kittywakes, guillemots and razorbills. Also from Carrickarede Island you’ll have an uninterrupted view of Rathlin Island and Scotland. 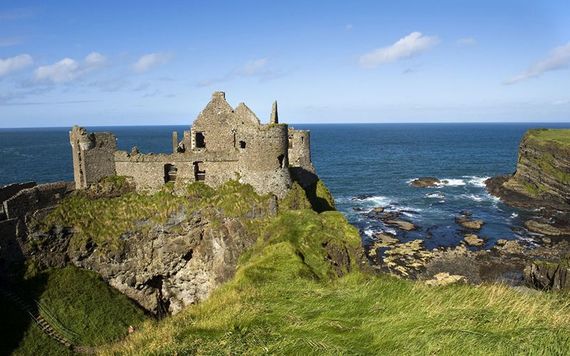 This ruined medieval castle, located on the edge of a basalt outcropping, between Portballintrae and Portrush, is accessible via a bridge connecting it to the mainland. The extremely steep cliffs on all sides may have been what made the early fort so attractive to early Christians, Vikings and, of course, tourists today drawn to the dramatic attraction.

Built by the MacQuillan family in about 1500 the castle was seized by the MacDonnell clan in the 1550s who put their mark on the castle under the leadership of chieftain warrior Sorely Boy MacDonnell.

In the 17th century Dunluce was the seat of the early of County Antrim and a small town was established in 1608. Now visitors can explore the archaeological findings including cobble streets and stone houses.

This beautiful avenue of 300-year-old beech trees was planted by the Stuart family in the 18th century and was intended as a compelling landscape feature to impress visitors as they approached the entrance to their Georgian mansion, Gracehill House. Two centuries later it is one of the most photographed phenomena in Northern Ireland, in no small part thanks to "Game of Thrones."

The amazing tunnel of trees is also, according to legend, haunted by the “Grey Lady,” who silently glides along the road and vanishes when she arrives at the last beech tree. Some say the ghost is that of a maid from a nearby house who died in mysterious circumstances hundreds of years ago.

Here’s a short Rick Steve’s video on the county: