All the basics – and some fun facts – about County Antrim. 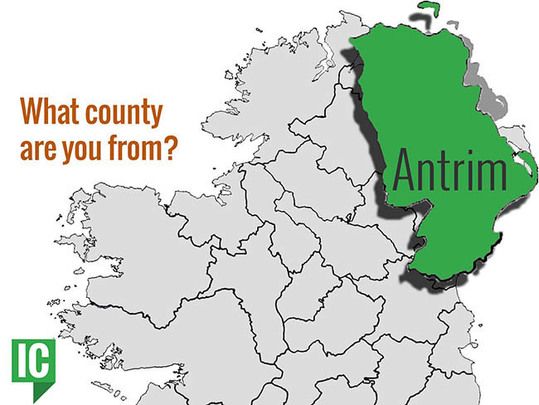 What's your Irish county? All the basics - and some fun facts - about County Antrim. Jay Sia

A brief history: Bordered by the North Channel (with Scotland across the waters), County Down, Lough Neagh, and County Derry, County Antrim is located within the province of Ulster and is part of Northern Ireland. While it’s unknown exactly when Antrim was formed, a portion of the area that currently makes up the county has held the name of Antrim since at least the 14th century. In ancient times, Antrim was populated by the Celtic Darini people. In the Middle Ages, the region was divided between a number of clans: The Dál Fiatach, who ruled over the kingdom of Ulidia; and the O’Lynch clan, who ruled over Dál Riada, the Dál nAraide and the Cruthins. The county was also an entry point for the Vikings, later, for the Scots, many of whom settled in the area. It became part of the Earldom of Ulster in the 12th Century. Today Antrim has a population of approximately 618,000, mostly concentrated in and around the Belfast area.

Key attractions: From the famous glens to the Giant’s Causeway, Antrim has an abundance of natural attractions. The Glens of Antrim are nine valleys (glens) that sweep across the county. The Giant's Causeway, a UNESCO World Heritage site, is a unique landscape of basalt columns and cliffs. The Bushmills distillery produces legendary whiskey, and of course there is also the capital city of Northern Ireland, Belfast, which offers a rich and textured history, nightlife, and a burgeoning business and tech scene spearheaded by the Titanic Quarter.

Antrim’s coasts feature a number of well-known resort towns, including Portrush (with its famous golf links), Portballintrae and Ballycastle; on the east Cushendun, Cushendall and Waterfoot on Red Bay, Carnlough and Glenarm, Larne on the Sea of Moyle, and Whitehead on Belfast Lough. The valleys of the Bann and Lagan rivers, with the intervening shores of Lough Neagh, form Antrim’s lush lowlands.

Click here for photos of the key attractions in Co. Antrim.