From the Children of Lir to the Old Witch the Cailleach, this beautiful walking country has many stories to tell. 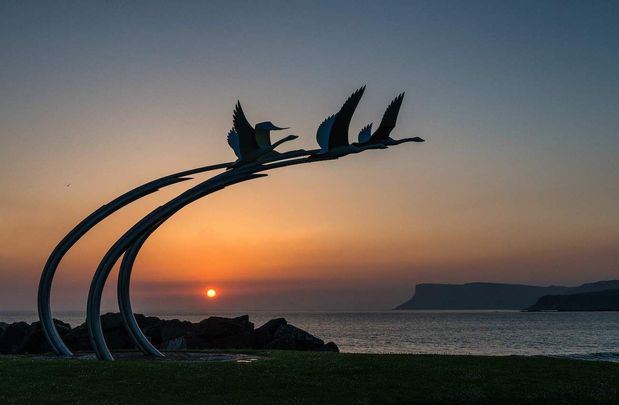 The Children of Lir: Just one of the Irish myths and legends connected to Ballycastle, in County Antrim. Tourism Ireland / Irish Content Pool

An extract from "Legendary Ireland", by Eithne Massey, bringing you on a tour of the rugged coast area around Ballycastle steeped in Irish myths and legends.

Originally published in Ireland of the Welcomes Magazine, in the July / August 2017 issue. Subscribe now to our sister publication printed six times annually.

Legend has it that Deirdre of the Sorrows landed at Ballycastle in County Antrim, when she returned to Ireland after a happy few years in Scotland with her lover Fergus. She was then forced to marry the King of Ulster and, later, killed herself when he threatened to give her to another man.

Although the story of Deirdre begins and ends at the court of the Ulster King Conchobhar in Armagh, perhaps its strongest connection is with the glens of Scotland, where Deirdre made her home with her lover. The lament Deirdre sings when leaving these glens has the same emotional depth as the one she sings when her lover is killed.

But we look to the extreme northeast coast of Antrim, to the landing-place where Deirdre returned after her few short years of happiness. Tradition has it that this landing place was Ballycastle Bay, just under Fair Head. The beach at Ballycastle is a pleasant one with magnificent views of Rathlin and Manannán’s Rock. Ballycastle is a lively seaside town and the site of Lammas Fair in August, a gathering that has its roots in the Lughnasa festival. 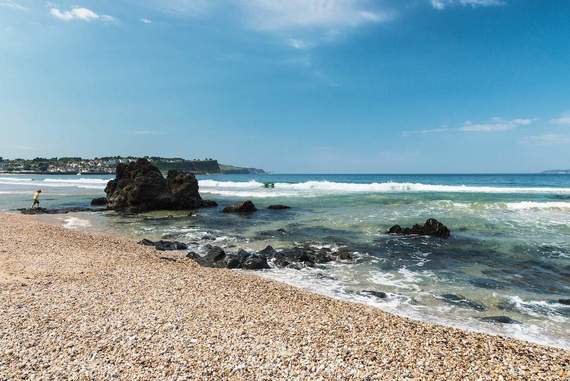 At the east end of its beach, there is a cluster of flat rocks, known as Pan’s Rocks because, in the past, salt-panning was carried on here by the local people. It is said that Deirdre protested to the very end against landing here, wanting to land on Rathlin Island where at least they had the security of the sea as a barrier between themselves and the jealous Conchobhar. 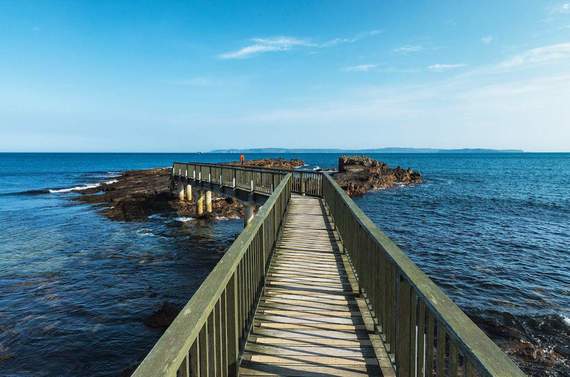 The sea journey to Rathlin Island is well worth making, not just for the experience of a beautiful and peaceful island, and the numbers of sea birds which make the island their home, but also for the friendliness and kindness of the people who live there – there is nothing quite like the feeling of staying on such an island when the last of the day visitors have left and the island sinks into its world of quietness. 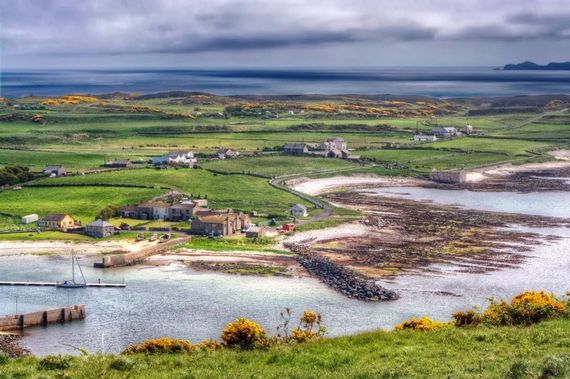 Folk tradition says that Rathlin was formed when Fionn’s huge mother tripped and dropped a pile of stones in the bay, on her way to Scotland to buy whiskey – she lies drowned under the water, and, in stormy weather, people say, ‘The old witch is kickin’’. The idea of the Cailleach or Old Witch as the creator of the landscape links this northeastern point of Ireland with that extreme southwestern one – Béara.

Not far from Ballycastle is Torr Head. It was there that the traitorous warrior Barach forced Fergus Mac Róich – who had taken on the safety of Deirdre and the Sons of Usna as his personal responsibility – to leave his charges and dine with him at his fort. The journey around the coast from Ballycastle to Torr Head passes by Fair Head, where there are signposted walks on the cliffs. 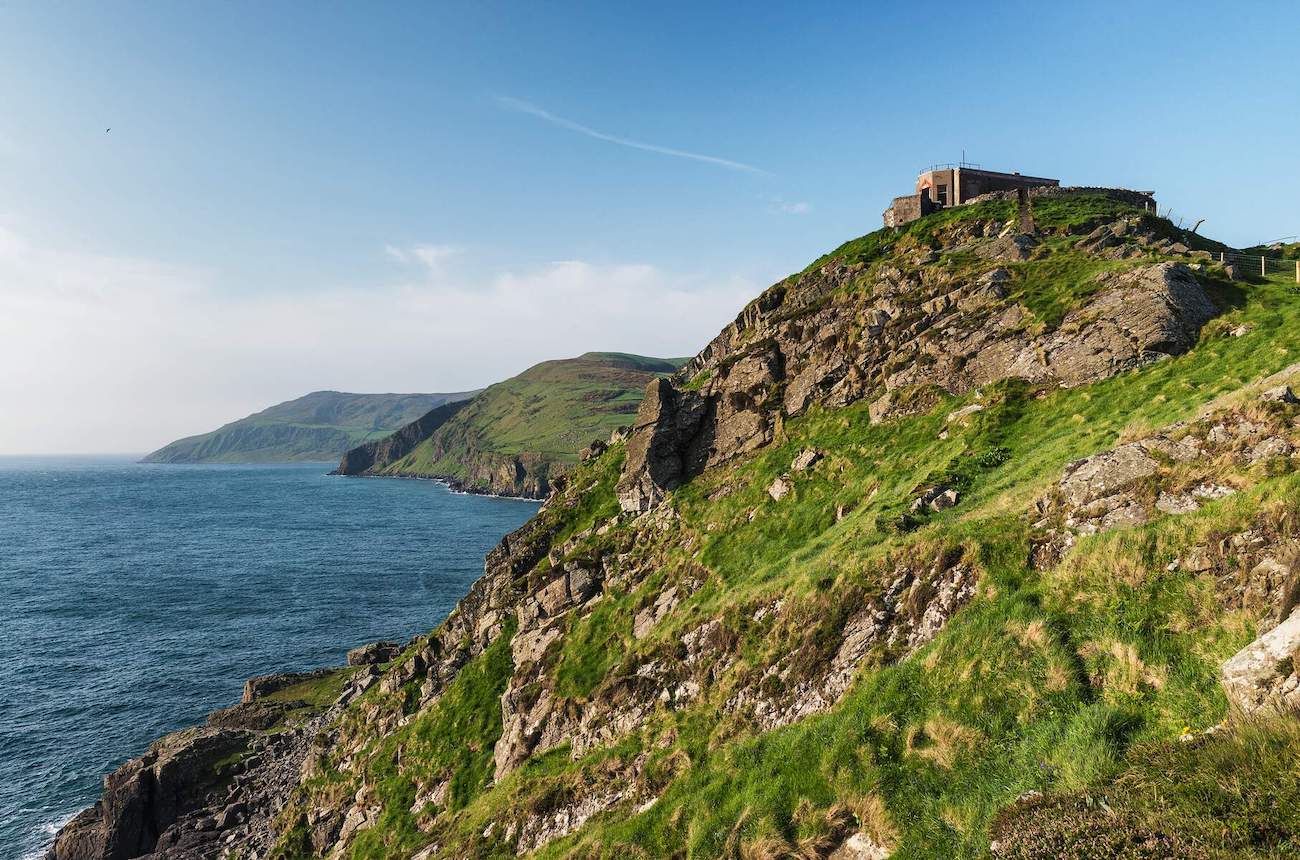 The small valley of Lough na Cranagh holds a crannóg in a lake hedged by green hills. Here, the trees and the gentle hills give relief from the sometimes overpowering drama and tempest of the coastal views.

Fair Head is also the site where yet another giant has his residence – not, in this case, a figure from mythology, but a character from local folklore, known as the Grey Man. This cloaked figure may be seen striding along the cliffs, looking out towards the sea when a storm is brewing. Perhaps this figure is connected with the grey-cloaked god, Manannán, for the rock that bears his name is not far out to sea, in the wild Sea of Moyle where the Children of Lir spent the most miserable part of their time in exile. Here you feel closer to the Mull of Kintyre than to Ireland; and indeed, at those times in the past when land travel was made difficult by bogs and great forests, Scotland would have been more easily accessible than many parts of Ireland.

It is on Fair Head that during the reign of Elizabeth I, the old Gaelic chieftain, Sorley Boy, screamed his madness and grief when he heard the shrieks coming across the sound from Rathlin. He had sent the women and children of his clan there for safety but an invading fleet, led by Drake and Norris, landed on the island and butchered every one of them.

This is country that can best be appreciated by those prepared to do some walking, to immerse themselves in hidden valleys and wild headlands. Not far away is Cushendall and the site of Oisín’s Grave – a Neolithic court grave on Tievebullagh mountain. This is the country of Fionn and the Fianna, of hunters racing with their hounds and their horns down narrow glens towards the sea. If Deirdre’s ghost wanders here, it is a lonely one, continually looking eastwards across the sea towards the glens of Scotland.

* Extracted from Legendary Ireland by Eithne Massey. It is available from www.obrien.ie.

Originally published in Ireland of the Welcomes Magazine, in the July / August 2017 issue. Subscribe now to our sister publication printed six times annually.