"Whether it’s vibrant urban locations or peaceful and undisturbed rural settings, the canal provides a wealth of opportunities." 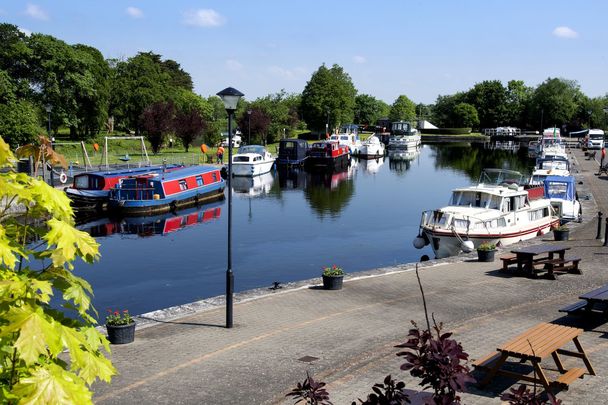 The Royal Canal can now compete with the best routes in the country writes Domhnall O’Donoghue.

For the past three years, I’ve been calling the Royal Canal home. In fact, when it came to purchasing my property in Dublin; the canal - bustling with a profusion of activity - was the key selling point.  ​​

Whether it’s strolling along the towpath, sitting outside a café and watching the world or marveling at a heron, spying on its prey in the still waters, the Royal Canal is at once calming and invigorating.

While I’m a blow-in to Ashtown - one of the many towns and villages lining the route - older generations will note that this canal has only become a multi-purpose amenity in the last decade.

Thanks to the tireless efforts from county councils, bodies such as Waterways Ireland, local communities and, in particular, volunteers; today, the Royal Canal can now compete with the best routes in the country.

Intending to transport freight and passengers between the capital and River Shannon, work on the Royal Canal began in Dublin in 1790. Construction of its southern counterpart - the Grand Canal - had already commenced over four decades earlier.

The Royal Canal - with its 46 locks - was finally completed some 27 years later.

Flyboats, drawn by horses, were initially used to transport goods and by the 1830s, the canal carried an impressive 80,000 tons of freight and 40,000 passengers a year.

Today, few will deny that the Royal Canal’s original construction was an extraordinary engineering feat - especially given the era’s limitations. And apart from the transporting people and goods, the 146-kilometer route also had the good manners to pass through some of Europe's most verdant countryside.

However, the railways’ arrival soon made the canal redundant, and it sadly fell into disuse, eventually closing in 1961.

But, like a Phoenix from the ashes, the Royal Canal was re-opened in 2010 following extensive restoration work.

Peppered with lock-cottages, 200-year-old limestone bridges and other ruins, the long and winding route - with its understated beauty and gentle charms - now offers a snapshot into our storied and somber past.

In terms of history, few events have transformed Ireland’s destiny more than the Great Famine in the mid-19th Century. In tribute to this devastating period where millions died or emigrated, the National Famine Way follows the ill-fated journey of 1,490 famine emigrants who trudged from Strokestown Park in Co. Roscommon to the ships in Dublin via the Royal Canal. 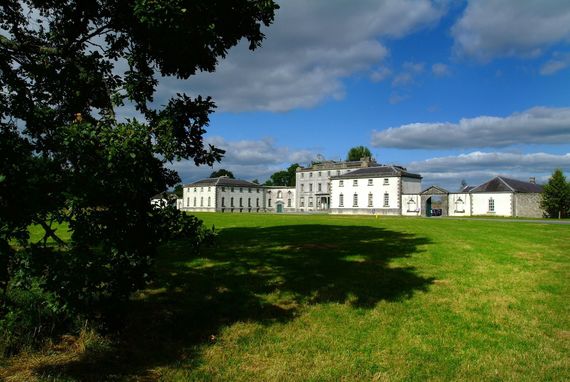 An inspired addition to the trail is an informative and interactive guide. Taking the form of a 14-page passport, it offers a wealth of information on local history, cultural landmarks and amenities along the route.

Ideal for young people, the passport also documents the harrowing journey of one of the original famine walkers from Strokestown Park – 12-year-old Daniel Tighe – who remarkably survived the horrific trip to Canada on one of the worst famine ships.

Award-winning author Marita Conlon-McKenna has written vignettes reimagining Daniel’s expedition, which are connected to over thirty pairs of bronze children’s shoes interspersed along the route.

She adds: “They will also be reminded of our history, through a mix of evocative storytelling, song, art installations and cultural centers along the route.”

Another recent initiative in the final stage of completion is the Royal Canal Greenway - a user-friendly towpath, ideal for walkers, runners and cyclists.

As I write this, the recommended starting-point is cosmopolitan Maynooth, home to the National University of Ireland and the National Seminary. Head West for 130 kilometers and you’ll pass through Enfield and Mullingar, eventually arriving at Cloondara in Longford. 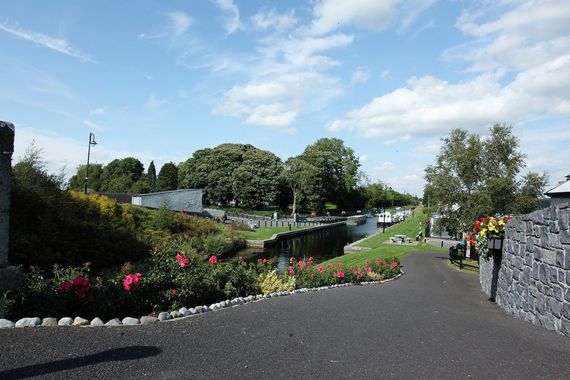 According to Waterways Ireland, the ambition is to deliver a Royal Canal Greenway that includes the entire Royal Canal route, commencing at Spencer Dock, Dublin.

An aspect of the Royal Canal certainly worth celebrating is the rich wildlife on offer. On any given day, the waters play host to graceful swans, secretive moorhens with their colorful bills - and even the odd Mandarin duck or two, one of the world’s most handsome birds.

“Canals play an important role as wildlife corridors, linking fragmented habitats together as well as allowing species to migrate from one area to another,” says Tim Clabon from Irish Wildlife Trust - a conservation charity committed to raising awareness of Ireland’s rich natural heritage while protecting it for future generations.

When I quiz him about the type of wildlife we should look out, Tim hesitates - spoilt for choice.

“During the summer and autumn, bats fly up and down the canal hunting flies and moths. Daubenton's Bats would be one such species. Otters occur throughout the canals.”

Tim adds that canals support a wide diversity of birds. As well as mallards and coots, he reveals that herons can be seen hunting fish all year - and in the winter, species like Little Grebe can also be spotted.

“The bankside vegetation supports species of warbler including tits and thrushes. Hedgerows provide important nesting sites and food in the winter.”

According to Tim, the most spectacular bird pertaining to the canal is the Kingfisher.

“They’re often just noticed as a blue blur dashing by, but they do stop to feed by sitting on a perch and diving into water to catch fish such as sticklebacks or minnows - along with juvenile fish.”

Tim mentions that many aquatic species such as water beetles, may-fly larvae and caddis fly larvae can be found here - along with crayfish and water snails.

He adds that there is also plenty on offer for plant lovers:

“Reed canary grass, common reed, meadow-sweet, purple-loosestrife and aquatic mint can be found along the canal margins. In the water, plants such as pondweed, milfoil, bur-reed, yellow water lilies and bogbean can be seen.”

Whether it’s vibrant urban locations or peaceful and undisturbed rural settings, the canal provides a wealth of opportunities for anglers.

“Now with climate change, we’re getting savage storms drifting across Ireland and, naturally, anglers can’t fish in such conditions,” Mick Flanagan from Midland Angling tells me.

“This is where the Royal Canal comes into its own as you can shelter along the banks, and it does not get that much-discolored water from rain and high floods.”

David Byrne, the Angling Marketing Coordinator for Inland Fisheries Ireland, agrees that the canal is an excellent resource for anglers.

“The Royal Canal is generally regarded as a coarse and pike fishery - good stocks of fish can be found on many sections of the canal from Dublin to Longford,” he says, adding that the main species on offer include roach, bream, hybrids, perch, rudd, tench and carp.

David praises the number of well-established angling centers along the Royal Canal banks, which can be found between Enfield and Mullingar.

“Enfield plays hosts to many local, national and international angling events,” he reports. “The stretches at Enfield, Kilmore, Blackshade, Ballasport, Longwood, Moyvalley, Cloncurry, Ferns Lock and Kilcock are well worth a visit.”

Closer to Mullingar, David lists Kilpatrick’s Bridge, Ballinea Bridge and the Harbour at Pipers Boreen as noted areas, and emphasizes that fishing can be excellent in the harbor areas.

“At Leixlip - from Deey Bridge to Castleknock - there are four permanently pegged match sections, good fish stocks with excellent angling,” he reveals. “The Packenham, Clonsilla, Lucan, Confey and Leixlip sections all produce fish.”

The canal is a hugely rewarding resource for boaters, no matter their experience. Self-drive barges for two - six persons can be hired from Richmond Harbour, Clondra and Castleknock in Dublin. 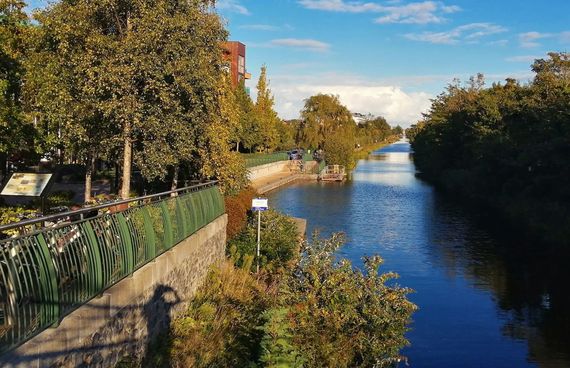 According to Waterways Ireland: “The freedom of making your own travel decisions, flexibly deciding to stay or wander a little further off the beaten track, makes cruising holidays a marvelous experience. Never say 'once in a lifetime' because once you've tried it, you'll want to come back again and again.”

Don’t be surprised to see canoes or kayaks sailing in tandem along the waterways.

“Our club was formally opened by the Lord Mayor of Dublin in June 2018,” says Art Fitzpatrick, chairperson of the Royal Canal Kayak Club, located in Ashtown.

“Our primary sport is canoe polo - canals make for excellent canoe polo pitches since there is no current, unlike a river.”

The club successfully applied for a Sports Grant in 2018, which was used to purchase kayaks, paddles, buoyancy aids, helmets and spray decks.

“The purpose of acquiring this equipment was to allow the club to grow and attract new members,” Art explains. “Canoeing equipment is expensive; this can make the sport difficult to begin for an individual. When a club can provide equipment, it makes it easy for an individual to partake in the sport.”

Another of the Royal Canal’s many charms deserving of being singled out is the community spirit evident at every turn.

“I’ve been living in Ashtown since 2005, and I love the sense of community around here,” says Joanne O’Grady, who volunteers for the Royal Canal monthly clean-up.

“We’ve such a great team. We walk along the tow-path with our litter-pickers - all equipment courtesy of the Dublin City Council - chatting along the way and usually have a coffee afterward.”

She praises the many community activists and volunteers who have given so much of their time over the years, organizing clean-up days and family events throughout the year.

“Passers-by are delighted to see the canal being looked after and we often get a friendly nod or words of thanks, which adds to the sense that we are doing more than picking up litter – we’re helping in some small way to build some community spirit.”

Fittingly, Joanne directs her final words of praise at those responsible for the canal’s transformation over the past number of years:

“In the 1970s and 80s, volunteers from the Royal Canal Amenity Group did incredible work cleaning, upgrading and highlighting its potential as an amenity.

“Thanks to them - and others, of course - the Royal Canal is now home to incredible biodiversity, wildlife and has a fantastic towpath, which can be enjoyed by everyone.”