The soon-to-be-reopened National Famine Museum in Strokestown, County Roscommon, has recently undergone a €5 million renovation and has been transformed into a state-of-the-art facility. 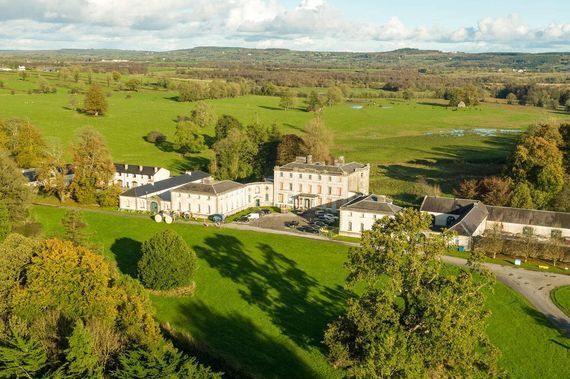 This week, Great Famine Voices 2022 returns to Ireland to be part of the annual National Famine Commemoration Day, which was held at the National Famine Museum, Strokestown Park, Co. Roscommon on Sunday, May 15. Taoiseach Micheál Martin officiated at the ceremony.

“As we come together to honor the victims of the Great Famine – those who died, those who were forced to emigrate, and those who suffered and survived – we also recall that the people of Ukraine who now need our help, have their own history of hunger,” he declared.

“As we are reminded in the Famine Museum, we too saw such values. We remember the doctors, the clergy, the Quaker community, and further afield, the members of groups such as the British Relief Association, the Choctaw Nation, the Jewish community of New York, the colored citizens of Philadelphia, and the people of Toronto and countless others who opened their hearts.”

Taoiseach Micheál Martin leads the National Famine Commemoration ceremony at Strokestown Park, Co Roscommon. It will include military honours and a wreath-laying ceremony in remembrance of all those who suffered or perished during the Famine. https://t.co/2gCSI8ESDU

After the ceremony, the Taoiseach visited the soon-to-be-reopened National Famine Museum which has undergone a €5 million redevelopment as an immersive state-of-the-art facility.

Martin described the new museum as “very impressive. I’d love to spend more time here reading the archives,” he said. “It is a wonderful resource in terms of giving insights into the Famine period and the enormous trauma.”

The Irish Heritage Trust has launched a short film, "The National Famine Museum, Strokestown Park," to showcase the new museum. It provides a behind-the-scenes look at the museum’s redevelopment, interactive displays, and evocative records from the Strokestown Park Archive that offer invaluable insights into the parallel lives of the cottiers, tenants, and landlords who experienced the Great Irish Famine.

The film explores the Famine migration from Strokestown in 1847 as a painful legacy that defines the museum’s educational mission and outreach activities such as Great Famine Voices, the National Famine Way, and the Famine Summer School to reconnect with Irish diaspora communities. It is part of the Great Famine Voices 2022 season, funded by the Government of Ireland Emigrant Support Programme.

The new National Famine Museum will open at Strokestown Park in June. It has been funded by Fáilte Ireland and Westward Holdings Ltd, in partnership with the Irish Heritage Trust. The restored museum uses cutting-edge technology including projections and soundscapes to immerse visitors in the culture and day-to-day life of Ireland in the years before, during and after the Great Famine.

Strokestown Park, in Ireland’s Hidden Heartlands, Co Roscommon, is a unique property that includes the National Famine Museum, a beautiful Palladian house, and stunning gardens. Owned by the Pakenham Mahon family for over 300 years, this evocative estate is a time capsule and a window into life in a big house during some of Ireland’s most tumultuous times in which the lives of the privileged landlords and destitute cottiers and tenants are brought into stark contrast.

The story of the Great Irish Famine of the 1840s has particular resonance in Strokestown. Tenants on the estate suffered profoundly during the Great Hunger. Many emigrated or died, and a previous owner of the house and local landlord, Major Denis Mahon, was assassinated in November 1847.

Since 2015 the Irish Heritage Trust, an independent not-for-profit organization, has been working with Strokestown Park and the Westward Group to help secure the future of this special place in Ireland’s Hidden Heartlands and to bring benefits to the local community. The trust is caring for the property and creating a sustainable operation for future generations.