Reader beware, you’re in for a delight! Halloween in Ireland is like no place else in the world. 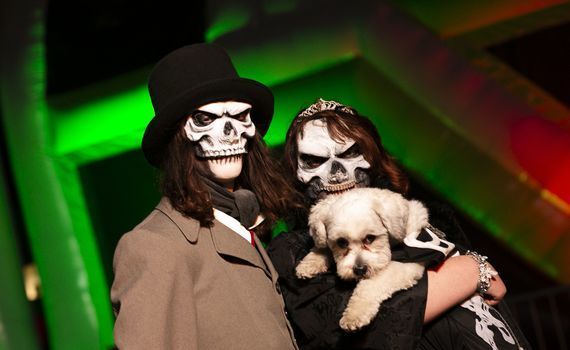 Visiting the birthplace of Halloween on or close to October 31 itself means a celebration unlike anything you’ve ever experienced. What should you do in Ireland on Halloween? Here are our top suggestions.

Who invented Halloween? It was the Irish - well, the Celts. Over two thousand years ago, the Celts believed that Samhain, the festival that marked the end of the harvest season, was also the day when the dead could cross into the world of the living. This is why there’s no place like Ireland to celebrate Halloween. You feel the ghosts of history surround you while Ireland’s hospitality and festive spirit envelop you in a warm embrace.

Wondering what to do in Ireland for Halloween? From haunted castles and pubs to mind-blowingly inventive parades and festivals, from thrills and chills to fun for the whole family, we’ve got you covered.

Spend it in the Halloween capital of the world

You may not be aware, but the Northern Ireland city of Derry-Londonderry, on the banks of the River Foyle, is the world’s Halloween capital, rivaling Salem, Massachusetts. Each year, the famous walled city breaks into a week-long festival extravaganza dedicated to all things Halloween.

Over the first three nights, the city walls alight with supernatural illumination for the Awakening of the Walls, and Samhain Sessions take place across the city for some musical entertainment. The festivities reach their high point with the Halloween Parade, featuring stunning costumes, ghosts, and ghouls.

Where might you find one of Ireland’s most awfully haunted regions? In County Offaly, in the midlands region of Leinster, of course. The so-called Offaly Haunted Triangle consists of three imposing castles that have more than their fair share of chilling histories.

First, there’s Charleville Castle, built between 1798 and 1812 by the First Earl of Charleville, Charles Bury. It has long been rumored that Bury was a devil-worshipper and his ghost walks among the dungeons, catacombs, and tower of his castle. Charleville is also haunted by the ghost of a young girl who fell downstairs to her death in the early 1800s, around the time the castle was being built. She allegedly still roams the castle and has been heard moving furniture, laughing, and talking. 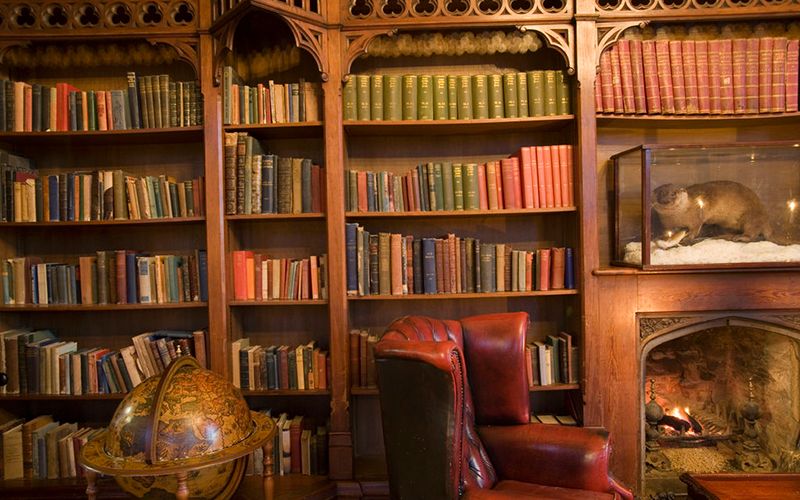 At Kinnity Castle, in the beautiful Birr countryside, the “Phantom Monk of Kinnitty” has been seen gliding along the room of the Banquet Hall in this castle. The Geraldine Room and the Elizabeth Room are two haunted bedrooms in the castle, with other reports of supernatural presence throughout the grounds. 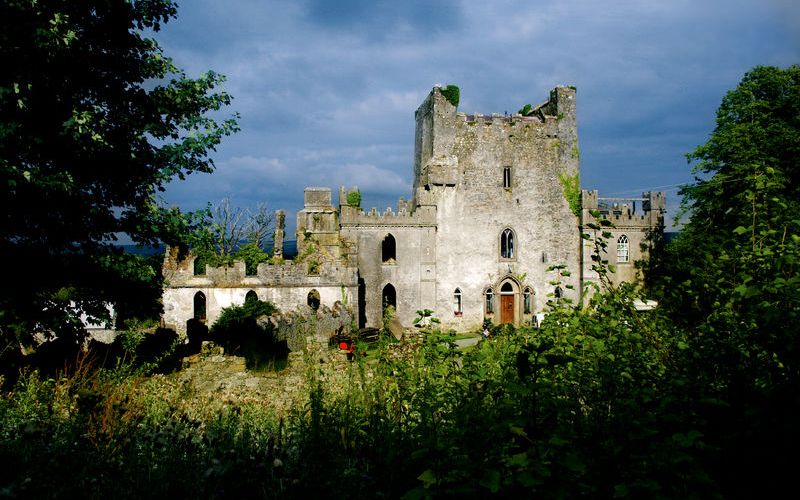 Next up, Leap Castle, near the town of Roscrea, is believed to be inhabited by several ghosts. One, perhaps the most frightening, is that of a foul-smelling elemental creature that is half-human and half-beast. It is said to roam the lower regions of the Castle. A ghost of a young girl, thought to be the daughter of a one-time owner of the Castle, also haunts the site. The story goes that her father killed the boy she was in love with, so she in turn killed her father one night during his sleep. The following day, the girl was pushed off the castle by an invisible hand, falling to her death from the hand of her own father’s ghost.

Ever heard of the name Macnas? The Galway-based spectacle and street performance company take their beloved Halloween parades through the streets of Dublin and Galway each year, featuring storytellers, musicians, acrobats, artists, and their signature giant puppets. 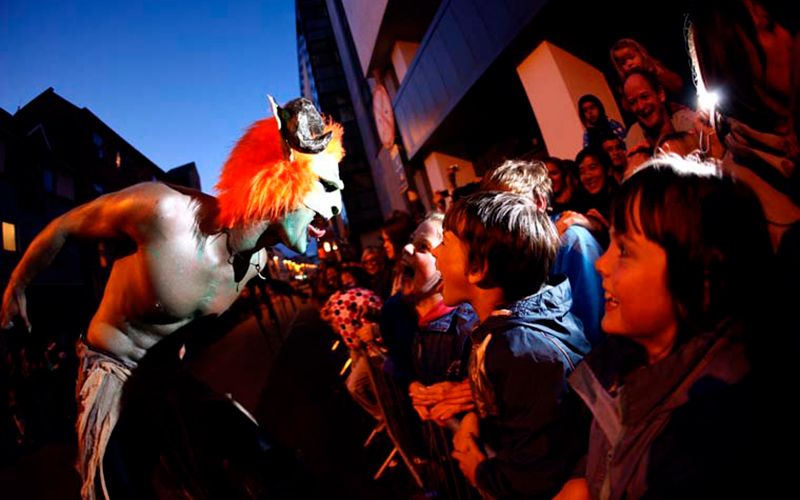 Get lost (or found!) in a hedge maze

Nothing whispers “Halloween” quite so alluringly as a hedge maze. With plenty of false signs and exits, a hedge maze requires you to trust yourself, problem-solve, and get over the end of The Shining! One of Ireland’s largest hedge mazes can be found a short trip from Dublin in the north of County Kildare. The Kildare Maze, as it is known, opened to the public in 2000. It includes a watchtower at its very center so you can plan your escape if you get stuck. For novices, there’s a much smaller wooden maze, and for those who prefer to know exactly where they’re going, there’s a zip line course as well. 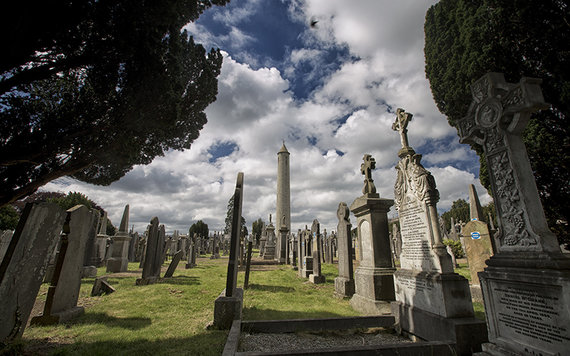 As one might expect of a city dating back to the Viking raids of the eighth and ninth centuries, Dublin is considered an exceptionally haunted city. This is why it makes sense to let the experts show you around on one of Dublin’s many excellent walking or bus ghost tours. One of the most acclaimed is the Gravedigger’s Ghost Bus tour, which takes brave souls on a whirlwind visit to some of the city’s most haunted locales, including Dublin Castle and Christchurch Cathedral, Kilmainham Gaol, Glasnevin Cemetery where over 1 million Dubliners take their final repose, and it’s adjoining Gravedigger’s Pub (a.k.a John Kavanaugh's), where you can enjoy a much-deserved drink.

For those who prefer to feel fear on foot, try the Haunted History Walking Tour of Dublin, which winds through the cobblestoned streets of South Dublin and tells tales of witch burnings, haunted St. Audoen’s church, and demons who once stalked the city streets.

Have a pint in the world’s most haunted pub

Would you dare order a pint at Grace Neill’s Pub in County Down? Built in 1611, the pub was originally known as “The King’s Arms,” but was renamed after Grace Neill, who ran the inn in the town of Donaghadee for many years until her death in 1918 at the age of 98.

But Grace hasn’t let her death interfere with her work at the pub. A ghost of an old woman in Victorian clothing has allegedly been spotted in dark corners of the inn, and her spirit can be seen at the front bar, straightening glasses and furniture and switching lights on and off. A strange shuffling can apparently be heard coming from the second floor, and some have even felt an invisible “presence” pass through them while standing near the building’s staircase.

Patrons visiting Grace Neill’s, officially one of the oldest pubs on the island of Ireland, have nothing to worry about – the former caretaker of the inn is as friendly as ghosts can be! Grace ran a welcoming establishment while she was alive and continues to do so in her afterlife. Stop by for pints, music, and the craic!