Go north to Co Donegal if you want to experience the hidden Ireland, one far from tourist coaches and the crowds. 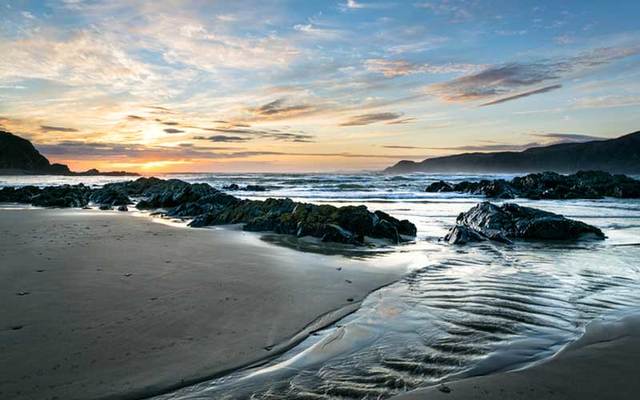 Here's a handy list of lesser-known Irish gems in Co Donegal, known mostly to the locals and in-the-know visitors but still off the radar to wider tourism.

Go this year, thank me later.

A stunning ring fort located at the top of the Greenan Mountain, the site has been in use since the neolithic age but its current fort was probably first built in the sixth or seventh century. One of the royal sites of Gaelic Ireland boasts commanding views of Derry, Donegal, and Tyrone.

Historian Brian Lacy suggests that the earthen banks surrounding the fort probably represent the defenses of a hill-fort of the late Bronze Age or Iron Age. On the south side of the hill is the formerly covered spring well which is dedicated to St. Patrick.

The Grianan is thought by many to have served the same purpose as the more famous Tara, as a place of both festival and ritual inauguration. To visit it is to connect with millennia of Irish history.

If you have ever been to Big Sur in California you may get a sense of déjà vu when you visit the even grander Slieve League in Co Donegal.

Almost three times higher than the more famous Cliffs of Moher, they're the highest sea cliffs in Europe with a spectacular drop of nearly 2000 feet until they reach the wild Atlantic ocean.

The wild heather strewn path that will take you along this ridge is called the “One Man's Path,” and it's one of the most remarkable walks to be found in Ireland or Europe.  Don't worry it's not dangerous, but you will need a head for heights and you may want to think twice on a stormy day!

Afterward you can explore Donegal’s world-famous and centuries-old tweed craft heritage, as it is still practiced in the nearby Ardara town. Or for a fine dining experience or a luxury hotel stay with lakeside views, you book a stay at the award-winning Harvey’s Point Hotel.

This hidden location is really a trip in itself. Offering one of the most scenic views in Ireland, once you reach the cusp of this stunning vista you will see for miles across the land to the North Atlantic.

It's the ultimate fill your heart with Ireland wow moment and you will immediately want to share it with all your friends and family.

On a clear day you will feel like you're witnessing the nativity of the world up there. And the best part? Not a tourist bus or coach for miles. You'll feel like you have the world to yourself.

One of the most beautiful places that this reviewer has ever seen (or stayed in) the Fanad Head Lighthouse can be found at the top of a rocky headland on the Fanad peninsula in Co Donegal, Ireland.

Featuring panoramic views of Lough Swilly and the Atlantic Ocean, the lighthouse is located on its own little promontory and offers uninterrupted views of the land and sea that stretch for miles.

And the most amazing thing of all? You can have the place almost completely to yourself. There are few places left on earth where that kind of solitude can still happen. Put this one on your bucket list and thank me later.

Need somewhere to stay during all your northern explorations? We recommend the Fort Cottage.

Located on the shore of Lough Swilly in the Inishowen peninsula in Co Donegal (that's in the Republic of Ireland, not Northern Ireland) the Fort Cottage is situated in landscape so beautiful it'll refresh your spirit just to open the curtains and look out in the morning.

Here you will awake to bird song and the waves gently breaking on the shoreline. The only sounds will be and the restful sounds of the open country (and perhaps an occasional bee passing).

The rocks around here are the oldest in Ireland, at 400 million years old you will feel deeply connected to all the centuries that preceded you and restored to yourself after a few days simply soaking up the atmosphere.