The Irish Naturist society has some tips if you'd like to explore Ireland's unofficial nude beaches. 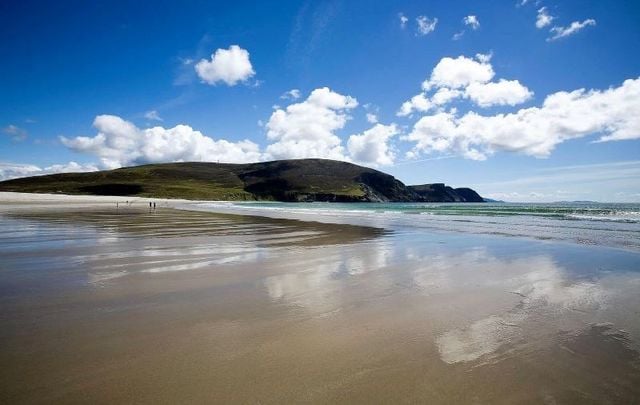 Being nude in Ireland isn't illegal -  for an offense to be committed, the person exposing him/herself must intend to cause fear, distress, or alarm to another person.

While that may true, there are no officially designated naturist beaches or sites in Ireland, but there is, however, one semi-officially recognized naturist area - Hawk Cliff in Co. Dublin.

The Irish Naturist Association, which promotes nonsexual public nudity, has compiled a list of beaches and bathing places across Ireland where naturism is "tolerated."

(There are, of course, many more secluded beaches that where you can indulge your inner-naturist.)

Wherever you go, the Irish Naturist Association encourages you to use discretion and common sense, noting that naturism is not as accepted in Ireland as it is in many other European countries.

The association, founded in 1963, says that naturism (i.e. nonsexual public nudity) in Ireland is 100% legal, provided that you don’t engage in any sexual activity and don’t intend to cause fear or alarm.

Here's a selection of naturist beaches across Ireland, according to the Irish Naturist Association:

Silver Strand is about four miles away from Galway and naturists flock to the small beach just off the main beach. To access the nudist beach, walk for about 20 minutes on the stone path. The perfectly quiet beach is in a beautiful setting and well worth the walk to get there.

This beach, which is surrounded by stunning scenery including rivers, beaches, lakes, and mountains, is off the Galway – Clifden road at the exit marked Roundstone.

Naturists must walk the full length of the beach and then take a path up the hill to a gate. Another path leads across the headland from the gate to a sandy cove which is barely visible until you are nearly on top of it.

Stunning West Cork offers dozens of quiet and secluded coves. Perfect destinations include the eastern and western sides of Clonakilty Bay, Dunowen with its rocky cliffs, Dunny Cove and Sands Cove while Glandore includes the famous rocky Prison Cove that is a long-accepted haven for naturists.

Corballis is just off the busy M1 motorway which links Dublin to Belfast. The beach can be accessed by driving through Donabate to the beach itself. Naturists should park as far down the beach as possible but be careful of the soft sand when parking. Once parked, just walk down the beach for about 20 minutes until you come to the secluded area.

Another option is to drive towards Donabate but to turn right at the signpost for the Island Golf Club and Corballis Golf Club. There is a small lay-by just before the entrance to the golf club where cars can be parked. Walk through the gate and follow the path over the dunes until you reach the beach. Once there, turn right and walk for another 15 minutes to the restful naturist area.

Brittas Bay is said to be one of the best naturist beaches on the east coast. It is certainly the most popular. The main beach is clothes-only and attracts campers and caravans at the weekend and during national holidays. The naturist beach, which is some two miles south of the main beach, is long and sandy, backed by large dunes but with a stony strip between the dunes and the water.

To get there, take the Junction 7 of the main Dublin-Wexford M11 south motorway, nine miles south of Rathnew. Follow the signpost for Jack White’s Cross and Pub and take the road until you can go no further. Take the turn right and follow the coast for about 2 miles until you come to an area marked "Buckrooney."

This area is gated and once you are through the gate, turn left and walk on the beach until you reach the fencing area on the dunes. This area is for naturists, however, the INA cautions that nude beachgoers should not venture outside the protected area as the beach is so popular with clothed families.