The ancient stone circles and dolmens scattered across Ireland

Dolmens and stone circles, pieces of archaeology that date back thousands of years, scatter the backroads of Ireland. Finding them is half the fun! 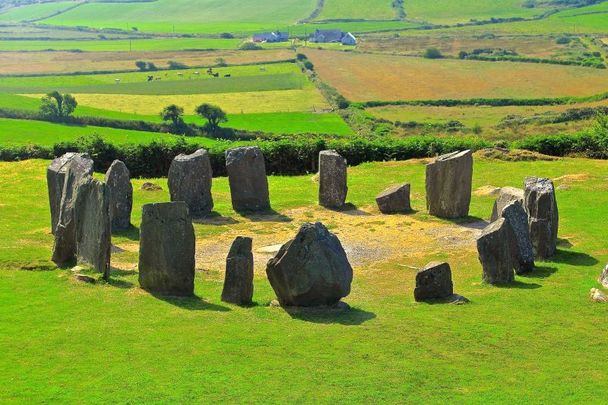 Many of Ireland’s backroads lead to ancient Megalithic structures that beckon one to imagine what life would have been like between 4600 and 600 BC when most stone circles and dolmens (portal tombs) were built.

Observing these magnificent structures is only half the fun. The “other half of the fun” in many cases is just being able to successfully find them on “roads less traveled.”

The Shronebirrane Stone Circle on the Beara Peninsula in County Kerry is reached by driving down a one-lane road (pray you do not meet another car) that leads to the most beautiful and dramatic Drimminboy Valley with mountains sloping away on three sides. Sheep graze within the stone circle as if it was actually designed to be a pasture for them.

Stone circles are ancient and mysterious indeed. Experts believe that when stone circles were built they served many possible purposes including trading sites and gathering places, as well as centers for rituals and ceremonies. The Drombeg Stone Circle in County Cork, also known as Druid’s Altar, is one of the most visited megalithic sites in Ireland. Ruins of two stone-walled huts and a communal cooking place are next to the stone circle indicating that Druid’s Altar was indeed a gathering place during the Bronze Age. 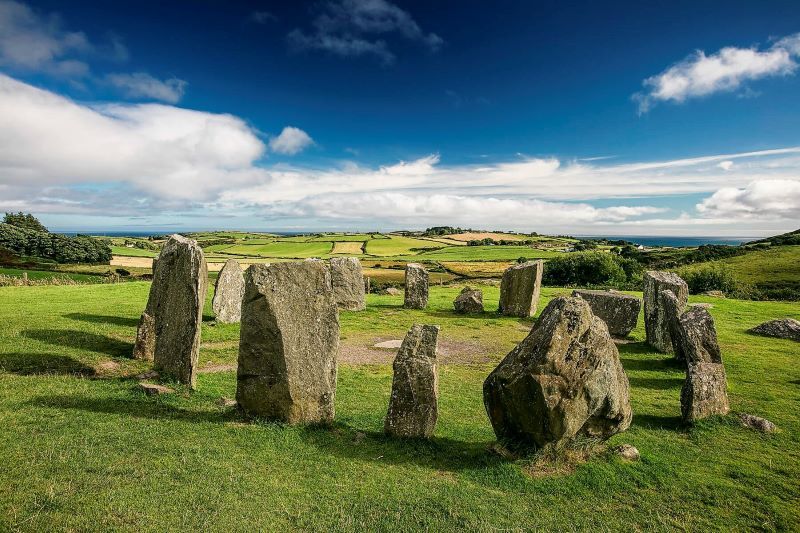 Many stone circles were also aligned to mark the winter or summer solstice. The Grange Stone Circle near Lough Gur in County Limerick drew a large crowd this past June 21 at sunrise as scientists gathered to welcome summer. You walk across farmer Timothy Casey’s field and make a small donation to view this stone circle on Mr. Casey’s farmland. If you’re lucky, Mr. Casey will greet you, as he did us on two occasions. He will delight you with stories about the largest standing circle in Ireland! 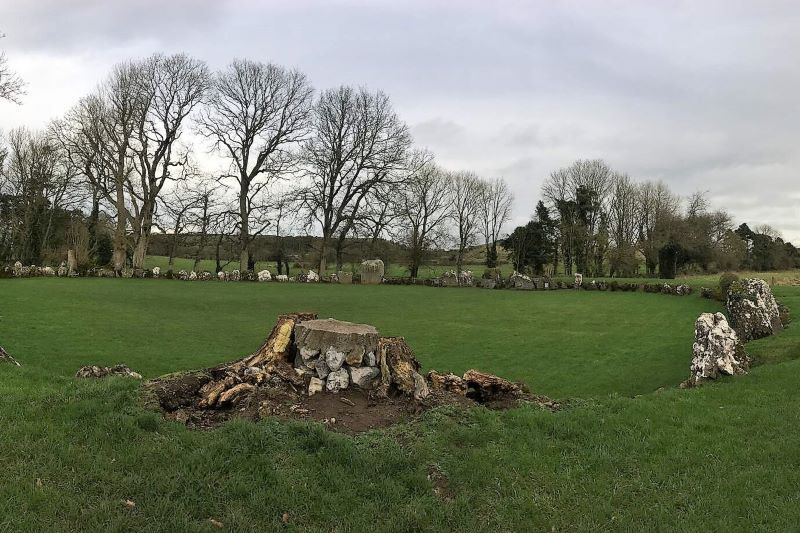 If you pass through Kenmare town in County Kerry, park your car in town and take a five-minute walk to the Kenmare Stone Circle, also called Shrubberies by the locals.  This very unique egg-shaped stone circle has a boulder burial Dolmen in its center surrounded by 15 heavy boulders. 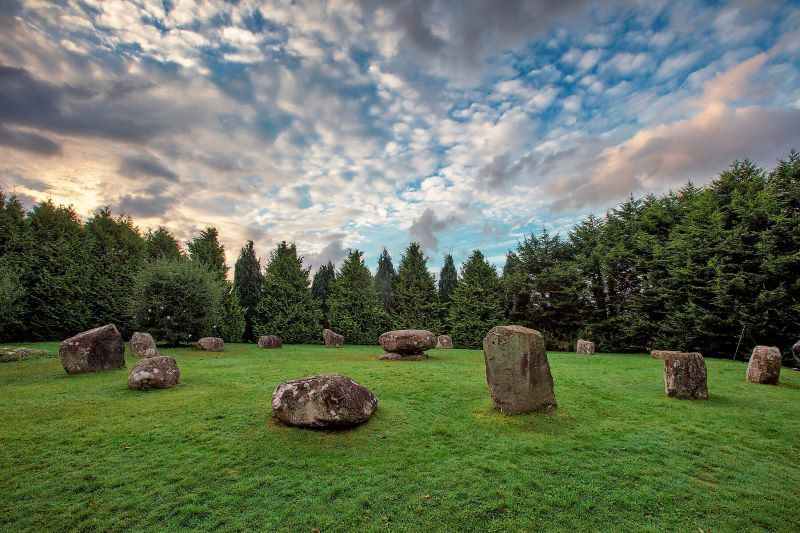 Speaking of dolmens or portal tombs, the Kilmogue Portal Tomb or Mullinavat Dolmen is reached by traveling down a narrow dirt road outside of the quiet village of Mullinavat in County Kilkenny. We actually had to stop for a rest on our way to find this exceptional dolmen due to a rural Ireland “traffic jam” as a farmer and his flock of sheep meandered down the road. 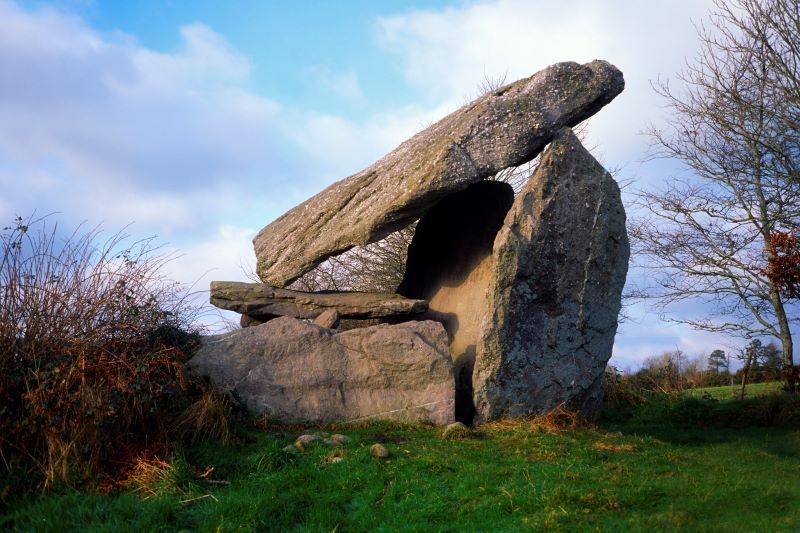 The Ahakista Stone Circle on Sheep’s Head Peninsula in County Cork was cleared in 1995 when the Sheep’s Head Way hiking trail was being developed. Also known as the Gorteanish Stone Circle, a short uphill climb on a rocky streamlined path leads to the eleven stones (4 still erect) that make up this Bronze Age circle overlooking Dunmanus Bay to the south.

Just north of Bantry in County Cork can be found the Kealkill Stone Circle just outside the village of Kealkill. Make sure you wear waterproof shoes since you will need to cross two rather soggy fields and climb over a rock wall using a wooden ladder to reach this stone circle and two large standing stones. The view is well worth getting your feet wet! 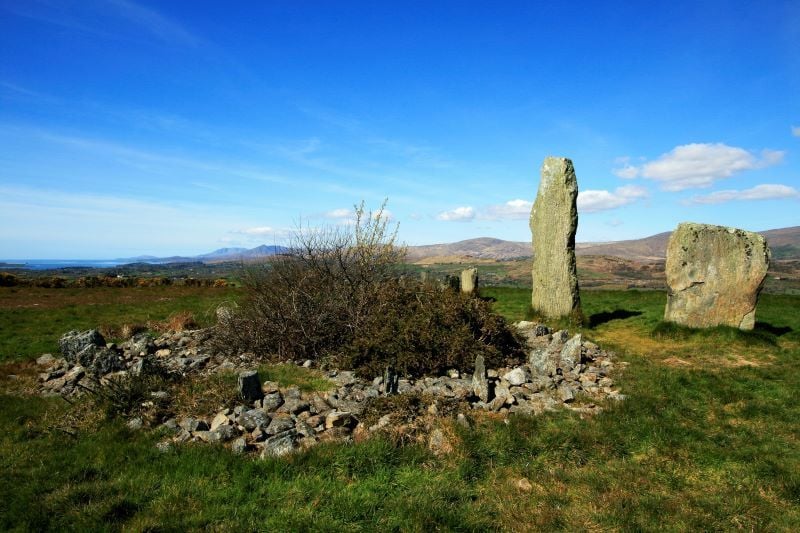 When it comes to portal tombs, one of the most photographed Neolithic sites in Ireland is the Poulnabrone Dolmen in the Burren, Co Clare. The barren rocks of the Burren provide an exceptional backdrop for this burial tomb constructed between 3800 and 3200 B.C. Grazing cattle share the grounds of this majestic site with human tourists. 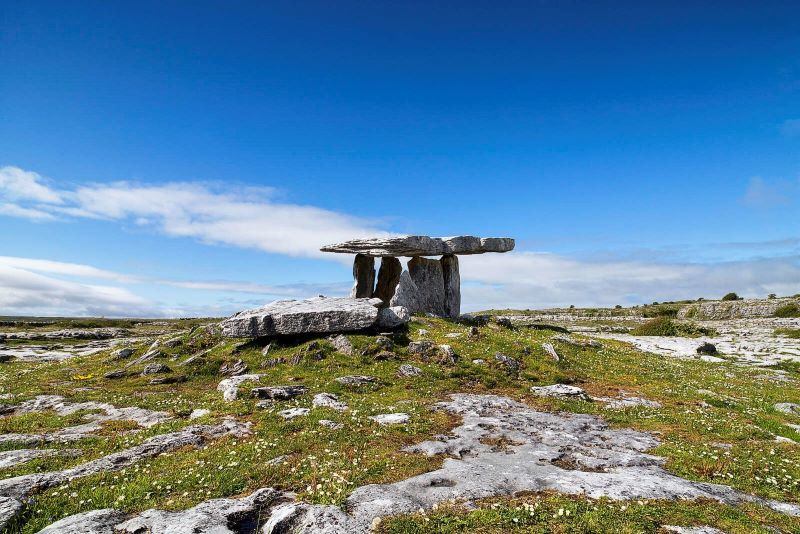 The Carrowmore Megalithic cemetery in Co Sligo features multiple portal tombs and boulder circles. Give yourself at least two hours to fully explore this site featuring tombs estimated to be up to 6,000 years old. Like the Kenmare Stone Circle, Carrowmore Tomb 7 is a boulder circle with a dolmen in the center. You get two for the price of one!

Tomb 57 at Carrowmore is a large circle consisting of 33 large boulders. This boulder circle is almost 20 meters in diameter and features a mountain backdrop second to none. These are only two of the many stone circles and tombs that can be found at Carrowmore. 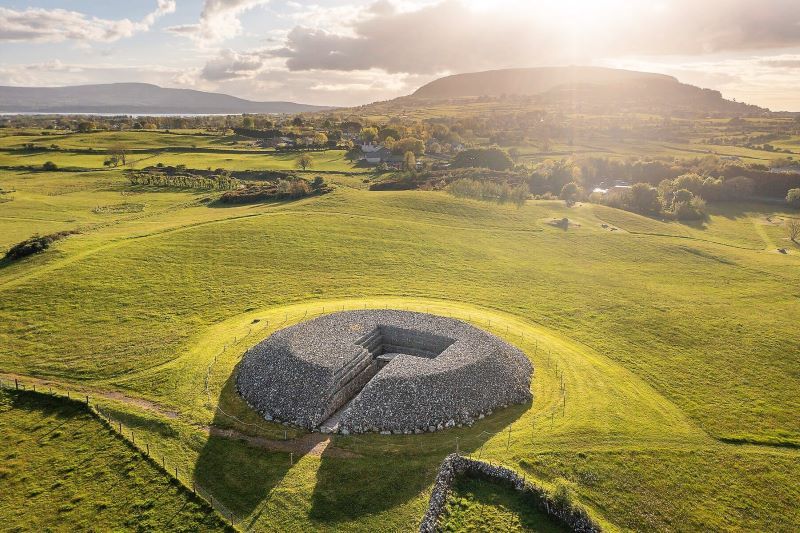 So when you plan your first or next trip to the Emerald Isle, make sure you plan to take in one or more stone circles or dolmens. And if you see an unexpected tourist sign for a stone circle or dolmen, we highly suggest you don’t bypass the chance to discover one of Ireland’s ancient treasures!

*Kate and Mike Lancor live in Moultonborough, New Hampshire, and enjoy “chasing” their own ancestors as well as helping others “chase” their ancestors. They run Old Friends Genealogy and can be contacted via their website or at OldFriendsGenealogy@gmail.com.They have traveled to Ireland several times and especially enjoy “chasing” Irish ancestors for their clients.