An insider's tour of Dunquin, the Dingle Peninsula Gaeltacht region

Felicity Hayes-McCoy and Wilf Judd take us on an insider’s tour of Dún Chaoin, or Dunquin, on the Dingle Peninsula 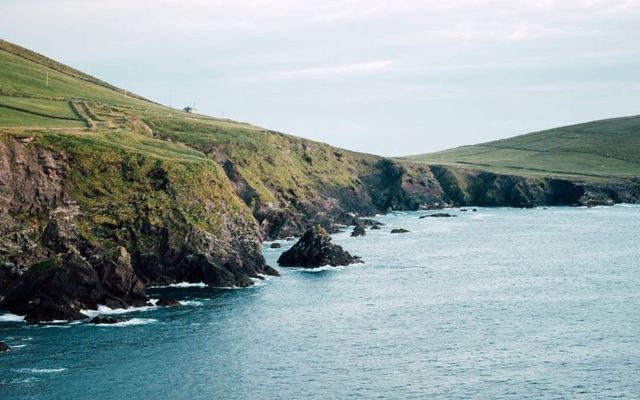 The Dingle Peninsula’s coastline ranges from sandy beaches that change with every tide to high rocky cliffs more resistant to the pounding of the Atlantic Ocean. Yet cliffs, too, are subject to coastal erosion and walkers should always take care.

Editor's Note: Taken from Ireland of the Welcomes | July/August 2017

Scrambling out to the farthest possible point to take a selfie may feel fine but the cliff face immediately below may be no more than a ledge of grassy earth and shale suspended above the ocean. It’s important never to underestimate the power of the waves, or of the sudden, unexpected gusts of wind, which can be strong enough to lift an adult male off his feet.

In 2007, about 1km of the Slea Head Drive had to be reconstructed farther inland following the collapse of the cliff edge after a violent storm and, at Dún Chaoin, during an exceptionally wet winter a few years later, a river of mud swept down from the mountain into the graveyard that stands on the seaward side, above the cliffs.

The stretch of water between the mainland and the Great Blasket is notoriously dangerous to navigate in bad weather. In 1588 two ships of the Spanish Armada foundered here, having taken refuge from the autumn storms. After the Armada’s naval defeat by the English, the Spanish ships had tried to make their way home through the North Atlantic. More than twenty were wrecked off the Irish coast, from Antrim, in the north, to the Dingle Peninsula.

The first to go down in the Blasket sound was the San Juan de Ragusa. The second, called the Santa Maria de la Rosa, dropped anchor, hoping to ride out the storm. But she was driven onto a rock and sank with only one survivor who later

Christian practice of establishing churches and places of worship on sites already sacred to local deities. Over time, spring wells dedicated to their goddess became associated instead with Christian saints.

Though countless others have fallen into disuse, many feast or ‘pattern’ days are still observed in Corca Dhuibhne. The word ‘pattern’ is a corruption of ‘patron’ and refers to the saint to which a well or other holy site is dedicated. Patterns almost always include some sort of circular walk around the site in the direction in which the sun travels.

The feast day of St Gobnet, to whom the little parish church in Dún Chaoin is dedicated, is 11 February and an annual ritual still takes place on that date at the well that bears her name. Sited on a cliff above the ocean, the spring well, which bubbles up between stones, is now marked by a modern bust of the saint carved by the Irish sculptress Cliodhna Cussen.

Patterns involve specific rituals, the details of which are preserved in communal memory. People circle the site, usually three, five, seven, nine, or nineteen times, praying. At wells, they drink three, or seven, or nine times from their cupped hands. Then the circling may begin again, each round marked by touching a stone or throwing a pebble in the water. Before leaving, something is always left behind, a flower, a feather, a pin, a rag, or a coin, emblematic of sacrifice.

In many early societies, seasonal gatherings held at sacred sites appear to have been deemed necessary to promote the balance of the universe: the same belief can be found among indigenous peoples today, such as Native Americans and the Kogi of Colombia. In the past, people came to St Gobnet’s pattern from surrounding parishes and the Blaskets; fairs were always held on pattern days, actively incorporating cattle trading, matchmaking, and entertainment into the religious observance.

But the clergy, concerned by the persistence of pagan elements at patterns, systematically attempted to remove what they dismissed as incitement to drunkenness and licentiousness. In the nineteenth and twentieth centuries, many patterns were banned on the grounds that they attracted large gatherings and included music and dancing – precisely the elements that the pagan Celts would have seen as creative celebrations of life itself, as personified by the goddess. According to a local story (certainly apocryphal), one priest opposed St Gobnet’s pattern so strongly that he cursed the people of Dún Chaoin, who responded by throwing him over the cliff.

Domhnall Mac Síthigh, a local author and folklorist, says that many elements of Early Christianity, which themselves retained elements of native pre-Christian ritual and belief, survived in the folk tradition until the famine years of the nineteenth century when communities were fragmented. “That was the time the big churches were built and the small villages were scattered. The priests told the people that the famine and disease came from God, and they were cowed by fear.”

Now the music and other cultural events that take place on saints’ feast days are often held in church halls and community centers and, though the rituals at holy wells retain pagan elements, this separation of celebration from invocation has tended to obscure their origins.

Dingle and its Hinterland

People, Places, and Heritage by Felicity Hayes-McCoy with Wilf Judd is published by The Collins Press is available from www.collinspress.ie