Just minutes away from Dublin, you could be in another world

The pond outside the accommodation at Cliff at Lyons, in Celbridge, County Kildare.

Before visiting Cliff at Lyons, I was told that some smart folks, mostly from the US, had been using this hidden gem, in Celbridge, as an airport hotel. I’d heard of the Kildare destination hotel as a famed wedding resort and heard-tell of its wonderful food and of course its latest addition, the restaurant Aimsir, but what I found was so much more.

Our sister publication Irish Tatler once described Cliff at Lyons as “the love child of the Cotswolds and the south of France”. I must admit we were struck immediately by the amazing ambiance they’ve achieved in this getaway just a 30-minute drive from Dublin airport.

It was after three days on a boat on the River Shannon we arrived at the Cliff at Lyons. To say it was a feast for the senses is an understatement.

Entering the hotel complex, having driven up the long immaculately maintained driveway, you’re struck by the quiet quaint feeling to this country retreat. The reception, which really does feel as welcoming as an old country houses entrance hall, is adjacent to the Trellis café for casual dining (including delicious cakes and great wines) while the Orangery and the bar are housed in the next building, a much more complex and decadent affair. 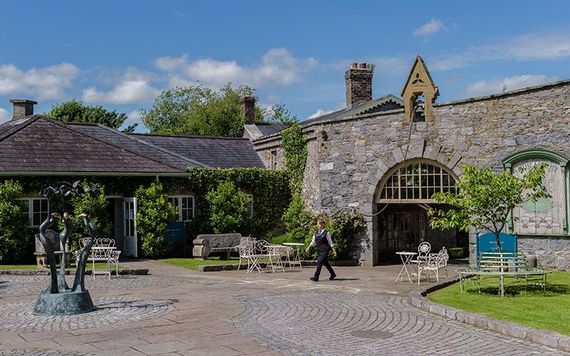 The main, entrance courtyard at Cliff at Lyons.

Our “cottage” for our stay was named the Poet’s Corner but in truth, the three-bed two-story house could have comfortably accommodated a large family. Including a beautiful kitchen, three large bedrooms, and a drawing room Jane Austen would have swooned over we all commented on what a magical location this house would be for a cozy family Christmas.

When we inquired, we were told that the house was not, in fact, an original, but our untrained eyes would never have known. The detail and decoration inside the house were just amazing and outside a garden and pond were the only thing that greeted us. 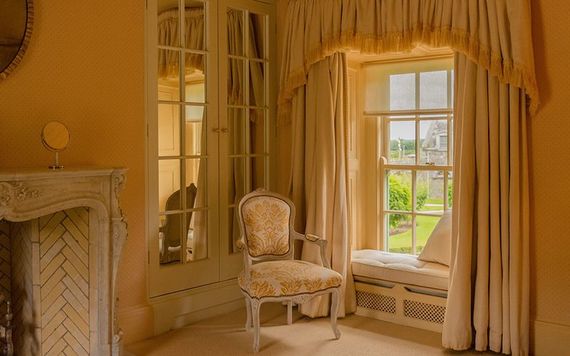 Inside a cottage bedroom at Cliff at Lyons.

In fact, although the hotel was busy with other guests and an Irish-American wedding there was a wonderful sense of peace and quiet all around.

We were lucky enough to spend a few hours being pampered in The Well, the on-site spa, which is breathtakingly different from almost any treatment centered I’ve had the pleasure of visiting. The vaulted ceiling, high-backed chairs, and wonderful light in the relaxation room gave us an inkling know we were in for something special. And we were right. I can highly recommend the "Cliff Complete Body Care" treatment, that'll leave you most relaxed and refreshed. 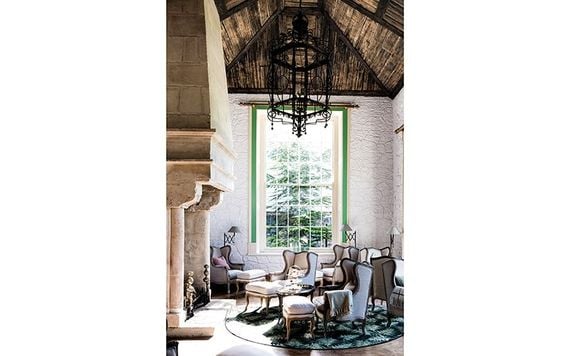 The relaxation room at The Well spa, at Cliff at Lyons.

For dinner, we ventured through the herb and vegetable gardens back to the Orangery for a truly memorable meal, created using local produce, and of course homegrown goods. The most interesting from our choices was surely the yellow pepper risotto topped with mackerel and artichoke. This dinner was an experience, in no little part down to its setting, in a side-glasshouse of an old main building, which made for a romantic and interesting surrounding. 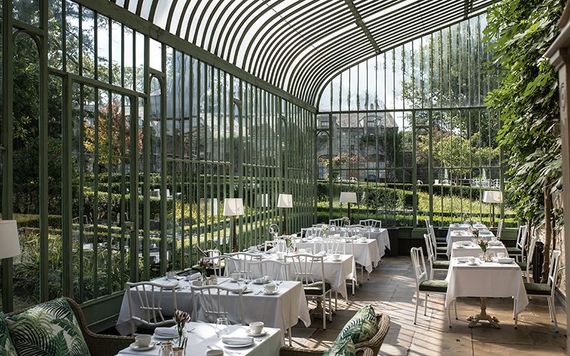 The Orangery restaurant at Cliff at Lyons.

After our meal, we retired to the bar, The Lyons Den, which is simply an amazing room and building. The bar and most of the room is carved out of a light and warm colored wood. The building itself is just charming, including a round window, facing out on the mill water, which is reminiscent of Tolkien’s Hobbit and a twisted chimney that was just the cherry on the top.

After a hearty breakfast, continental and cooked, at the Orangery, we ventured out for a walk around the grounds. The tranquil stroll took us out through Cliff at Lyons kitchen gardens and along the banks of the Grand Canal and back up the hotel’s long driveway. The perfect end to an indulgent and peaceful stay.

Read more: Which celebrity's favorite view in the world is the Cliffs of Moher?

The pond outside the accommodation at Cliff at Lyons, in Celbridge, County Kildare.