Spooky season in Ireland, the birthplace of Halloween

An Irish Halloween: season of mellow fruitfulness, and scary stuff too. 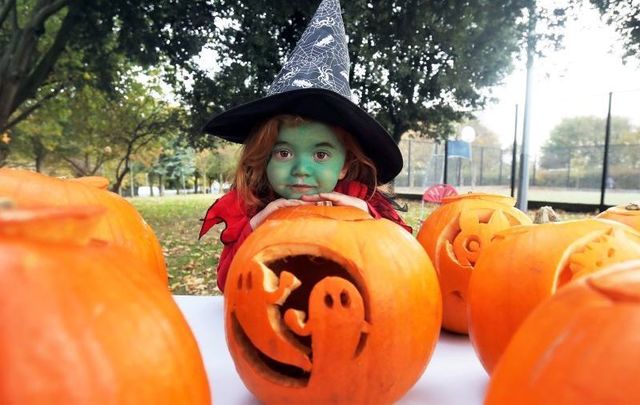 A child dressed as a witch at the Pumpkin Party in Markievicz Park, Ballyfermot, Dublin in 2018. RollingNews.ie

No one does Halloween quite like the Irish - we did invent it, after all!

The taxi was barreling across the Brooklyn Bridge and the driver was in full flow.

So I hoisted the white flag.

He was dying to tell me where he was from.

“No, Transylvania,” he retorted with extra emphasis. “Home of Dracula.”

The cab driver nearly drove into the East River when I told him that Dracula was an Irishman’s invention.

He had never heard of Abraham “Bram” Stoker, but by the time I reached my destination I had half-convinced him that the ever-thirsty count had been dreamed up under an Irish sky, perhaps a foggy one in late autumn, around Halloween.

Another Irish invention of course.

Well, not so much an invention, but rather a day in the year when thought is given to transience, from one season to the next, one form of existence to the next.

And, more lately, a lot of fun.

All Hallows Eve, as every Irish kid is reminded on October 31, is derived from the pre-Christian Celtic era and was adapted in relatively recent times - that being somewhere between a thousand and fifteen hundred years ago – to fit into contemporary religious belief.

So it came to pass that everyone’s favorite fright-filled holiday began in Ireland. Trace Halloween right back to its origins and you’ll find yourself in the mists of pagan Ireland over 2,000 years ago – a time when the ancient festival of Samhain (today, the Irish language word for November) was celebrated in the heart of Ireland's Ancient East to mark the beginning of winter.

The contemporary Halloween is the eve of the day, All Saints, when the holy are venerated and comes two days before the dead are revisited by the living on All Soul’s Day.

Somewhere along the way the day itself, and more importantly the night, became an occasion for the unholy and devilish to be unleashed on the world.

So what a perfect time to consider a devilish character such as Dracula.

And what better place than Ireland, the home of Halloween, saints, scholars, and little divils more lately adopting the language of a place that is farther still from the hallowed isle than even Transylvania.

That would be America, of course. Trick or treat, anyone?

Just as Ireland gave America its Jack-O-Lantern, America has given back to Ireland the idea of raising the profile of the Halloween holiday to new heights, vamping it up if you will.

And Ireland has taken its cue.

Not least with regard to the aforementioned Transylvanian nobleman who is celebrated mightily at Dublin's Bram Stoker Festival, a ghoulish gathering that includes a parade that looks like Mardi Gras meets Day of the Dead meets, well, a grand time out. 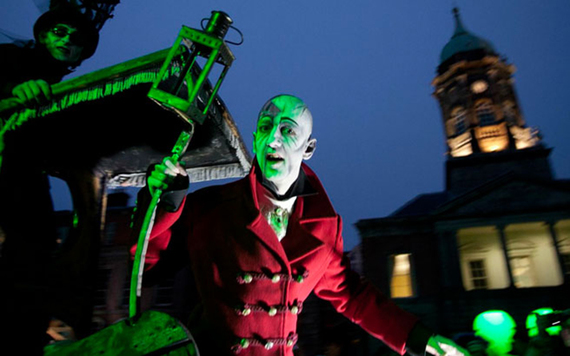 The idea of Dublin as Dracula central might be a novel idea to some, but it is firmly based on Stoker’s novel “Dracula” which first saw the light of day (likely to the night loving count’s dismay) in 1897.

Dublin’s Dracula festival is an absorbing celebration of an iconic literary creation and leads up to the big night itself, that being Halloween, October 31.

Suffice it to say, this is not a holiday that would work well on, say, July 31.

The early descent of darkness is a critical component as All Hallows Eve embraces the visitor in a mystical body hug.

The time of year is celebrated in other cultures too. Hindus have a festival of lights as October rolls into November.

And light, as well as darkness, is a critical ingredient in Halloween.

The aforementioned Jack-O-Lantern is said to be a human recreation of the will-o-the-wisp phenomenon sometimes observed in peat bogs.

The lantern would serve to keep away evil spirits on a night when, tradition had it, the spirits of the dead would rise and wander about the place.

In Ireland, and up until comparatively recent times, a lantern would be carved from a turnip.

The carving took an age and the New World most definitely came to the rescue with the pumpkin version.

Anyone in Ireland carving a turnip these times is taking hallowed tradition to a hollowed-out extreme. The pumpkin is yer only man Jack.

Now after the revelries in Bram Stoker’s Dublin, an Irish Halloween can be no better spent than in the city of Derry/Londonderry – the birthplace of Halloween and host to a glittering All Hallows Eve festival these past thirty years.

[*Editor's Note: Due to the pandemic, organizers of the annual Halloween celebration in Derry are asking revelers to stay home, stay safe and enjoy the digital programme of events from the comfort of your sofa.]

Now all these festivities and gatherings surrounding an Irish Halloween are in built-up places with lots of people about.

What about not so built up places where the main thing about is only your imagination?

Ireland is known worldwide for the haunting beauty of its scenery. But best not forget its haunted places, such as Loftus Hall on the Hook Peninsula in County Wexford. 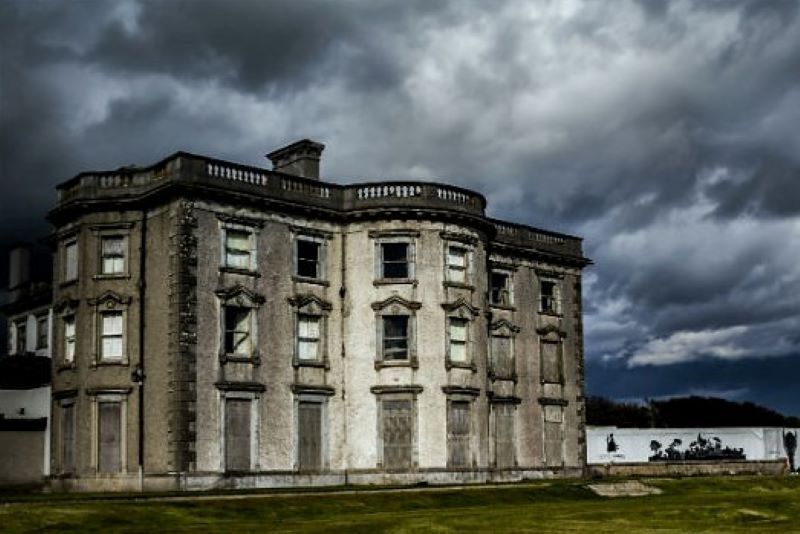 The hall has been featured on the Travel Channel and no surprise given that it is reputedly haunted by the ghost of a young woman and has been visited by the devil himself.

Grace O’Neill’s Pub in Donaghadee, County Down has had four hundred years to assemble its coterie of ghostly patrons and is reputed to be the most haunted hostelry in all of Ireland.

There are more spirits on the premises than you will find in bottles behind the bar.

Charles Fort in County Cork is a ways from County Down, but no less a place where restless spirits prowl the night, or in this case one very restless spirit known as The White Lady.

The fort, which dates back to the 17th century, is in a spot called Summer Cove near Kinsale.

The White Lady, as the story goes, was a bride whose soldier husband was executed for falling asleep on guard duty.

His bride, broken-hearted, threw herself to her doom from the battlements. Her spirit, it is said, returns to those battlements as she searches, eternally, for her lost love.

But also other entities that inhabit a landscape that has a history of being peopled going back over 9,000 years.

The people of those thousands of Halloweens are gone and, yet, not entirely so.

So how do you meet them?

Well, first of all, find yourself on Irish soil on the eve of the Samhain.

Perhaps you are staying in a cottage in the countryside, a Jack-O-Lantern in the window (sure, a turnip) and little prospect of kids pounding on the door roaring trick or treat, their hands out for all things sweet.

Step outside the door and beyond the meager light cast by the lantern.

It is a still night with a new moon, which of course means no moon.

A slight breeze catches a few fallen leaves and they begin to turn in a circle at your feet.

The breeze is not so strong that it disperses the bank of fog that is rolling in from fields that fall away to the invisible horizon.

A fox barks, an owl hoots, and you have the sense that you are not alone.

And of course you are not alone.

The spirits of millennia past are gliding over the landscape, and one of them moves in your direction.

You don’t see it; rather you sense it.

And then you hear it.

This post was produced in partnership with Tourism Ireland in 2017, and it was updated in October 2020. Find out more on Ireland.com