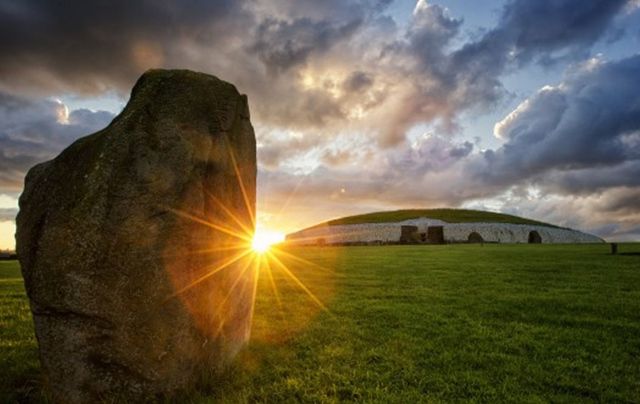 A jewel in Ireland's Ancient East trail, the tomb of Newgrange, in County Meath. iStock

Tourism Ireland has launched a new time lapse video which unearths some of the historical wonders from the east coast of Ireland.

The short film entitled “Dawn to Dusk in Ireland’s Ancient East” gives viewers the chance to experience Ireland’s most beautiful historical locations in a fascinating way. Tourism Ireland is launching this new video to promote the country’s newest touring route throughout the east coast.

This new route takes visitors on a journey through three significant parts of Irish history; the Land of 5,000 Dawns, the Historic Heartlands and the Celtic Coast. The adventure through The Land of 5,000 Dawns will bring you up to the north east of the country to counties Cavan, Longford, Louth, Meath, Monaghan and Westmeath.

Here visitors can marvel in archaeological sites like Newgrange, Cooley Peninsula and Belvedere House. Further down the country and visitors will find the Historic Heartlands in counties Carlow, Kildare, Kilkenny, Laois, Offaly, Limerick and Tipperary. This journey through history allows visitors to experience some of Ireland’s ancient medieval sites like Clonmacnoise, Castletown House, Kilkenny Castle, Rock of Cashel and the Rock of Dunamase.

Finally as visitors travel along they will encounter Ireland’s Celtic Coast in counties Cork, Waterford, Wexford and Wicklow. This part of the country takes in its famous coastline with cliffs, harbors and famous towns all steeped in history. Glendalough and Hook Head as well as Cobh and Waterford City are all part of the Celtic Coast.

Each historic part on the new route shows a different part of Ireland’s past, from myths and legends to tombs and sacred settlements, Ireland’s Ancient East has a lot to tell.

Newgrange is a Stone Age monument from the Neolithic Era and forms part of the Land of 5,000 Dawns. It is located in Boyne Valley, County Meath. Built over 5,000 years ago, this ancient passage tomb stands as one of the worlds oldest of its kind and predates both Stonehenge in England and the ancient pyramids of Egypt.

Every year a lucky few make the pilgrimage to Newgrange for the winter solstice on December 21. For a short period of time the passage through the tomb is illuminated by the rising sun showcasing its amazing interior.

This historic Middle Age archaeological site is part of the historic heartlands. It is located at Cashel in County Tipperary and was founded in the 12th Century. The Rock of Cashel was once home to the Kings of Munster for hundreds of years while also being the site of many massacres. Now this site welcomes thousands of visitors each year.

Glendalough is one of the main highlights of the Celtic Coast part of the new route. It is a glacial valley which is part of the Wicklow Mountains National Park in County Wicklow. It’s name is derived from the Irish term Gleann Dá Loch, meaning Valley of the Two Lakes.

This site is home to an Early Medieval settlement founded by St Kevin during the sixth century. St Kevin was in search of a place of solitude and peace when he happened upon this picturesque area. Glendalough was a very important monastic settlement during this time boasting churches, a cathedral and a round tower which visitors can still see standing today.

The East Coast of Ireland has some of the most beautiful landmarks that are steeped in history. Tourism Ireland are hoping this new touring route will showcase even more of what Ireland has to offer.

Tourism Ireland have been making a significant push over the past number of years to make Ireland one of the top worldwide destinations. Ireland has seen a significant boom in tourism with the introduction of new routes like this one and the Wild Atlantic Way.

In 2015 the island of Ireland saw an increase of one million visitors to the country compared to 2014, which also resulted in an increase in revenue on the previous year of a further €721 million ($762 million).

What makes Ireland one of the top destinations in the world to you? Let us know in the comments below.