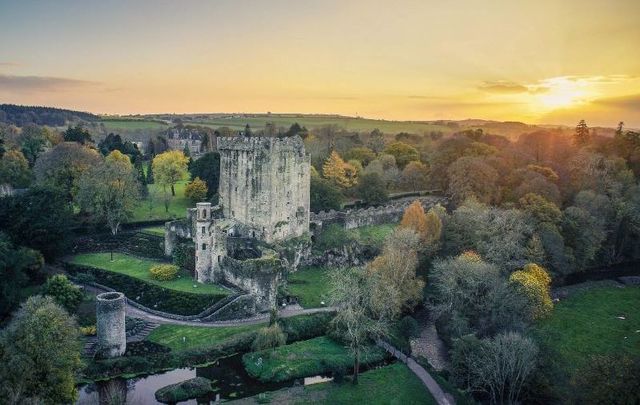 One of Ireland's most popular historic tourist attractions, Blarney Castle is a visual treat but the public has never seen it quite like this! Modern technology and a medieval stronghold come together! What a treat.

You simply won't believe this first-person view drone footage of Blarney Castle and Gardens, in Blarney, near Cork. Built in 1446 and a firm favorite amongst tourists from at home and abroad this footage really brings the sights and experiences of the wonderful stronghold to life.

Filmed by Aerial Photography Ireland using an FPV drone the unique video is certainly "something a little different", as the Blarney Castle spokesperson told IrishCentral.

"It allowed us to fly in places normal drones can't go. We flew up the stairs of the castle, through the circle in the stone feature and down the stairs of the wishing steps. We also loved the dramatic flight paths these drones can do which help make a really striking video."

The video starts with the drown flying through the ticket office and down the route visitors take to approach the castle. It then flies down the river that runs through the grounds and towards the famous stone feature with the circle in it and we flew through that. After that, it heads towards the fern garden and makes a pass by the waterfall and under some of the ferns.

The drone passes the famous witches' stone and our renowned witches' yew tree which is 600 years old. It then flies through Blarney Castle and Garden's 90-meter-long pergola called the herbaceous border. It flies over the eagle sculpture and towards the lake and before flying over the jetty.

Then the drone enters the castle, flies up the stairs and then flies over Blarney's Marketing Manager, Paul O'Sullivan kissing the famous Blarney Stone. A  dramatic flight through the trees culminates with a spectacular view of Blarney House where the owner, Charles St. John Colthurst, lives. The standing stone circle,  The Seven Sisters is featured next before the footage finishes by flying through the gift shop.

Blarney Castle is the third structure that was been erected on this site. In the 10th century, a wooden hunting lodge was located here. Around 1210, this was replaced by a stone structure with its entrance some 20 feet above the ground on the north face. This building was demolished to make way for the third castle built by Cormac MacCarthy, in 1446. This is the tower house or fortress residence of this that we know today as Blarney Castle.

Blarney Castle is a tower house, a type of fortification built by Gaelic lords and the Anglo-Irish between the 15th and 17th centuries. Tower houses are typically four or five storys tall with one or two main chambers, plus several ancillary chambers on each floor.

Blarney Castle is an unusually large tower house, and it comprises at least two towers – the second one was added in the 1500s. You can see the point the two phases meet as a vertical line in the masonry on the north elevation.

The walls are 18 feet thick at the base, gradually sloping inwards as they rise. This makes the building more stable but would also have helped with defense: when an object was dropped from the top it would bounce off the wall on the way down and fly outwards into the enemy.

The story of the Blarney Stone is that it was brought over from the Holy Land and brought to Scotland during the Crusades. Cormac MacCarthy sent 4,000 men to support Robert the Bruce in the Battle of Bannockburn, in 1314. As a thank you the stone was split in half was sent to Blarney. Years later the witch that lived on the grounds was saved from drowning and she revealed the power of the stone to Cormac.

The term ‘blarney’, meaning beguiling but misleading talk, gained currency during the 16th century as the MacCarthy of the day attempted to fend off the demands of Queen Elizabeth I.

Facts about Cong, Co Mayo - the home of "The Quiet Man"