The Irish airline has formally applied to join a joint transatlantic venture which could see it gain 72 new unique codeshare destinations in North America. 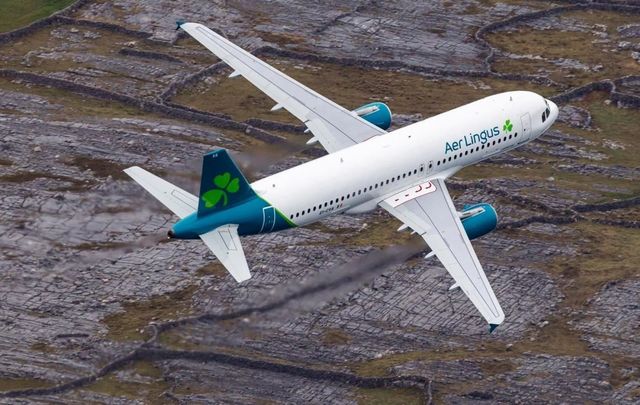 An Aer Lingus plane, with the new 2019 livery, flying over the Aran Islands, off Galway, en route to JKF airport in New York. Aer Lingus

Irish airline Aer Lingus has formally applied to join a joint transatlantic venture which could lead to cheaper fares between Ireland and North America.

Aer Lingus is building on plans to further their reach into North America, officially applying to join a joint transatlantic venture that could reduce their fares. The motion was filed to the US Department of Transport in December 2018, seeing the Irish airline added to a venture operated by its parent company IAG and American Airlines.

The carriers in the venture believe the addition of Aer Lingus could generate up to $96 million in consumer benefits annually, lowering the cost of transatlantic fares and potentially opening up new routes for Aer Lingus in North America.

The joint American venture - filed by Aer Lingus, American Airlines, British Airways, Iberia, and Finnair - is hoped to improve connectivity between North America and Europe for passengers, increasing codesharing that would allow for further expansion for the airlines.

Read more: Aer Lingus announces 2019 sale, bringing you to Ireland and Europe without breaking the bank

The new Aer Lingus sale will bring you to Europe for prices we never thought possible. Read more about the sale here: https://bit.ly/2Hu26Y9

It is reported that Aer Lingus could gain 72 new unique codeshare destinations in North American while they would provide a further 12 beyond Dublin for American Airlines. The possibility of unlocking new routes could also create demand for 16,800 extra passengers annually, again leading to lower fares.

“The joint business agreement will generate significant consumer benefits not achievable through other means and will not result in any lessening of competition," the carriers said.

The venture was initially agreed between American Airlines, British Airways and Iberia in July 2010 with Finnair being added to the fold in 2013.

Aer Lingus' addition to the venture would not initially see it join the Oneworld Alliance, of which the other carriers are members.

What do you make of the latest venture? Let us know in the comments section.