January 6 is a special day in Ireland when we celebrate the women who worked so tirelessly during the holiday period. 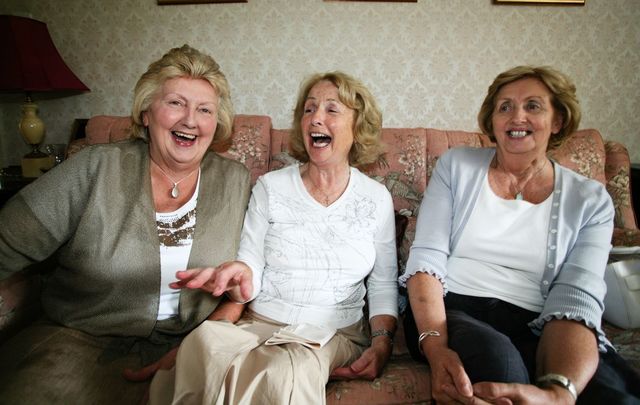 Nollaig na mBan 2022 celebrates the backbone of the Irish country; the ladies and most importantly, the Irish Mammy. Getty

The women of Ireland who worked so hard over Christmas are celebrated throughout the country on January 6, Nollaig na mBan, also known as Little Christmas or The Feast of the Epiphany.

Nollaig na mBan (pronunciation Null-ug na Mon), which can be translated from Irish (Gaelic) as "Women's Christmas," is one of Ireland's biggest traditions and is observed on January 6. On this day, women traditionally get a much-needed rest after catering to everyone during the holiday festivities.

In the Christian religion, January 6 is the Feast of the Epiphany, which celebrates the manifestation of the son of God on Earth and also marks the end of the 12 days of Christmas, giving way to the 'Little Christmas' nickname.

Traditionally in Ireland (and apparently in Puerto Rico also), Nollaig na mBan is the day on which all the Christmas decorations must come down—not before or after—or else risk bad luck for the rest of the year. When holly was the only decoration in Irish homes, it was taken down on this day and burnt.

In rural and small-town Catholic Ireland, especially, women would gather in each other’s homes or local pubs for a few stolen hours of gaiety while the men looked after the brood.

What plans do you have for #NollaigNamBan / #WomensChristmas? We're raising a glass at 8pm Irish time to honour & celebrate #Ireland's daughters who are no longer with us, our heroines of Ireland. Join us?#IrishWomenInHistory #IrishHistory #History #Tradition #Women #IrishWomen pic.twitter.com/U30Xnxync9

An article from the Irish Times in 1998 joked that even God rested on the seventh day, Irish women didn't stop until the twelfth!

Speaking to the Times, Irish scholar Alan Titley remarked that the tradition was most common in the west of Ireland in a litany of different ways. "Most women in west Kerry would have raised five or six turkeys for sale at the Christmas market," he said. "They kept the money – like egg money – and if there was anything left over after Christmas, they spent it on themselves."

A common phrase was "Nollaig na mBan, Nollaig gan mhaith" (Women's Christmas, no good Christmas), referring to the lack of plentiful feasts by the time January 6 came around.

Siobhan Fahy, from Ballyferriter on the Dingle Peninsula, told The Irish Times: "But us women would go visiting that afternoon. It was a very simple celebration, just eating a slice of currant loaf in someone's house and having a cup of tea and a chat, but that was the day you'd do something for yourself and have a rest after all the Christmas work."

On the eve of Women's Christmas (Oíche Nollaig na mBan – the subject of a famous Irish language poem by Seán Ó Ríordán featured below), twelve candles were often lit in the windows. In some areas, different people lit each candle, and the first candle to go out was said to be the first person to die. Rushes pulled, dried, and dipped in tallow were used if candles could not be found.

To me, this is a wonderful holiday as it reminds us, as Irish people, about the strength of Irish women, especially mothers.

I am sure those of you who have been lucky enough to experience in some form the famed "Irish mammy" will agree that nothing or no-one compares.

Before Ireland was flooded with money and “notions of upperosity,” the women who went before us were the backbone of the family and they seldom received much credit for rearing large families.

My two grandmothers raised 15 children between them, which has many benefits for me as a grandchild and niece but had obvious drawbacks for them as mothers.

Our female ancestors in Ireland would think nothing of manual labor such as saving the turf, cutting the hay, and whitewashing the barns. Magically, they would juggle such tasks with cooking for their large broods, cleaning, and going through childbirth every few years.

In old Ireland, there was no mistaking the fact that the woman’s place was traditionally in the home.

Of course, this fact seems like an insane concept to Ireland’s new breed of high-powered, well-educated women.

On the Eve of Nollaig na mBan, 12 candles lighting in the new Heritage Centre window.

The twelfth and final day of Christmas, January 6th, is known as Nollaig na mBan or Women’s Christmas or Little Christmas https://t.co/mgV5c3CPtXhttps://t.co/Q0sHgsqn8x pic.twitter.com/24xOKwC2Ad

Despite our evolution, the heart and soul of Irish women remain unaltered.

When catching a flight back to New York, my mother got up at 5 am to make tea and cut thick slices of her homemade brown bread, smothered with her homemade jam, simply because that is what Irish mammies do.

When we were teenagers, all the girls would have a sleepover in the Drake's sitting room and the next morning Jenny’s mam would cook us all a full Irish breakfast. I can still smell the Clonakilty black and white pudding.

You have an Irish mammy when your friends spend ten minutes chatting to your mother in the kitchen before you realize they are even in the house, or when your best friend's boyfriend’s mother gets up at 1 am to make you all tea after your night on the town before placing a hot water bottle in your bed.

The click of the kettle as it boils, the softened muffle of the fridge door as it opens, the familiar voice, and the warm smile is synonymous with an Irish mammy just going about her day.

We may be getting married later and having fewer children these days, but the Irish blood running through our veins remains the same.