Penny Mordaunt’s uncle has revealed on the family's genealogy website that the Mordaunt's Irish roots can be traced back to the late 1600s in Co Wexford. 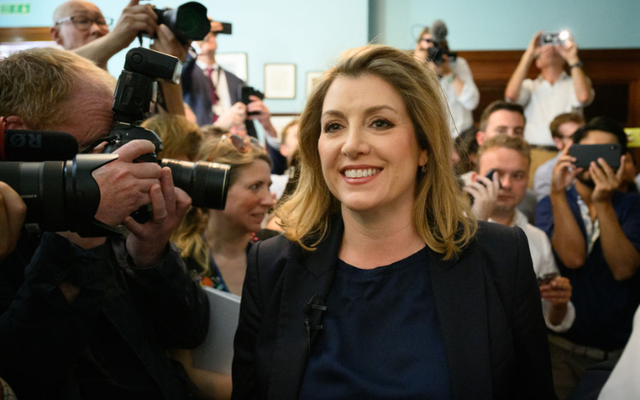 Conservative leadership candidate Penny Mordaunt arrives ahead of a press conference to launch her bid to become the next Prime Minister, on July 13, 2022, in London Getty

The leading candidate to become the next UK Prime Minister, Penny Mordaunt, has strong Irish ancestry in Co Wexford.

Penny Mordaunt, the Minister of State for Trade Policy in the UK, is one of the firm favorites in the race to become the next Conservative party leader to replace Boris Johnson.

Her uncle Henry Mordaunt has revealed on the family's genealogy website that the Mordaunt's Irish roots can be traced back to the late 1600s in Co Wexford. He believes the family are of Norman origin who settled first in England and then in Ireland.

The family was tenant farmers on land in Ballintlea, near Gorey, throughout the 19th century and in North Wexford, the family name was often pronounced and even spelled ‘Morning.’ It's believed the family’s Catholic ancestors fled England and moved to Ireland, possibly to escape religious persecution after Henry VIII’s Reformation.

The earliest family members in Wexford identified with any certainty are the brothers Patrick and Michael Morning or Mordaunt, born in the 1740s or 1750s, and possibly the second generation of Mordaunts born in Co Wexford.

Michael Morning is named in the memoirs of the 1798 leader Miles Byrne from Monaseed as his aunt’s husband. His brother Patrick Mordaunt or Morning was a tenant of the Hatton family, living for much of his life on a small holding in Ballantlea, near Gorey, with his wife Mary. When Patrick died – sometime before 1825 – his farm was divided between his two sons Patrick and Denis Mordaunt.

Denis Mordaunt (1783-1868) was baptized in the parish of Kilanerin, near Gorey, and he married Mary Byrne in Avoca, Co Wicklow, in 1813. One of their younger children, Edward Mordaunt (1831-1917), married Bridget Crowe. They lived on 86 acres at Cullentra until he was evicted in 1886 “for the non-payment of a monstrous rack-rented and flooded farm” and was jailed for his role in the ‘Land War.’

Edward’s son Patrick Mordaunt (1874-1914) was baptized in Monamolin and married Bridget Plunkett in Wexford in 1898. He enlisted in a cavalry regiment and the family moved to Canterbury.

His son, Penny Mordaunt’s grandfather, Edward (Ned) Patrick Mordaunt (1900-1982), was born in Canterbury but was sent back to Ireland to school.

After a brief time in the British army in France during World War I, he returned to Ireland in 1919. According to Henry, his father then joined the anti-Treaty IRA in the Civil War and was jailed for his Republican sympathies.

In 1924 Ned Mordaunt rejoined the British army and married an English woman. They had seven children including Penny’s father John who was born in 1939 and served in the Royal Navy.

Henry Mordaunt said it was a “complete surprise” to see his niece emerge as a frontrunner to become the UK’s next prime minister, given she had a low public profile during Boris Johnson’s leadership.

“I disagree with her politics, unfortunately, but I would be happy for her if she achieves her ambition,” he told The Irish Times.

“She is the only member of the family, brothers, father, uncles, cousins, and others that supported Brexit," he added.

From dreaming of Ireland in prison to discovering strong Irish roots