WATCH: Here's what a summer in the Donegal Gaeltacht looked like 60 years ago

This short Irish film from the Irish Film Institute takes a look at how students spent their summer in 1962 at St. Brigid's Irish College in Ranafast, Co Donegal. 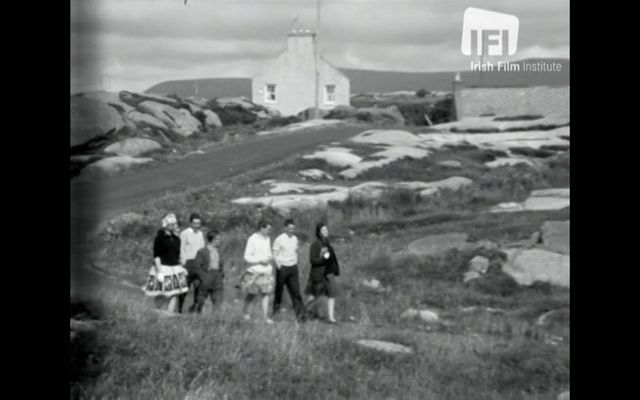 Father Joe Dunn introduces Ranafast, the Gaeltacht area in the Rosses region of Donegal, telling us: “We hear a lot about the vanishing Irish, the flight from the land, and the depopulation of the Gaeltacht. But the little village has not suffered any depopulation, particularly during the summer months when the famous Irish college is in operation.”

The film, with a voice-over in Irish, presents the activities of students who come to St. Brigid’s Irish college to learn about Irish language and Irish culture. While they are there to study Irish, the students also enjoy many leisure activities during their stay.

The views of the local countryside and contact with nature are a big attraction for students raised in the city and we see a group of young people swimming in a sea pool and playing football in a field. Others sit around a dinner table listening to a Seanchaí (traditional Irish storyteller) telling a story, but the high point of the summer is the céilí, where students overcome their shyness and develop a sense of camaraderie.

This film is part of The Irish Film Institute's Radharc Collection.

The Radharc Collection at the Irish Film Institute

Founded in 1959, Radharc is considered one of Ireland’s most important independent documentary production companies. It initially comprised of a small group of Dublin priests lead by Father Peter Dunn and Fr Desmond Forristal. The team made over 400 documentaries which were screened on RTÉ, Ireland’s national broadcaster, between 1961 and 1996. Their insightful and challenging filmmaking garnered many critical accolades.

The Radharc documentary series had a remarkably broad reach both geographically and thematically. It was shot in more than 60 countries around the world and looked at life from a range of religious, social and cultural perspectives. The team were not afraid to tackle difficult and often controversial topics and their standing as clergy allowed a level of access that lay filmmakers may not have been able to achieve. The Radharc output is significant, in both Irish and international terms, as a body of finely-crafted documentary work and an insightful record of Irish cultural, social and ideological engagement from the 1960s to 90s. The Radharc cameras shone a light onto a changing Ireland and recorded values, rural and urban traditions and indeed topography that no longer exist. Their international output was equally valuable as the team covered five continents in search of globally-significant subject matter.

"Irish College Ranafast – Radharc" is published here with kind permission of The Radharc Trust and with thanks to the Irish Film Institute (IFI), who IrishCentral has partnered up with throughout 2022 to bring you a taste of what their remarkable collection entails. You can find all IrishCentral articles and videos from the IFI here.