Achill Island native Mary Caffrey is delighted to be home in Co Mayo, thanks in large part to Safe Home Ireland, for her 100th birthday after decades of living abroad. 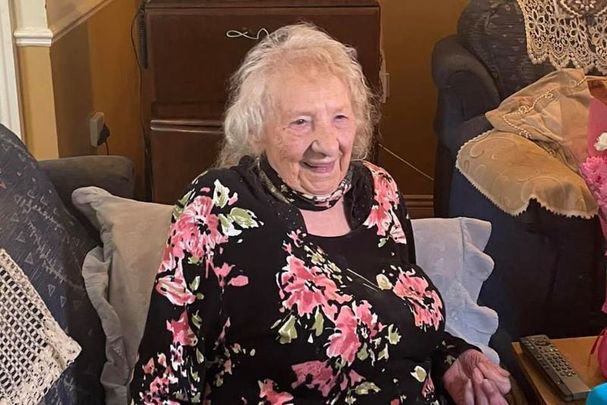 Mary Caffrey, who was born on Achill Island in 1921, marked her 100th birthday in Co Mayo on November 9, thanks in large part to Safe Home Ireland.

She met her future husband at 18 and was married by 21. Together they had three children, though one sadly died at the age of two. Caffrey continued working her whole life and in 1982 retired as an Auxiliary Nurse.

When her husband died in 1970, Caffrey, encouraged by her brother, made her way to Manchester where she remained for many years.

However, the Irish woman was eventually compelled to return to her native Ireland.

In December 1997, with the help of Safe Home Ireland, Caffrey become one of the first residents of St. Brendan’s Village in Mulranny, Co Mayo, where she still lives today and celebrated her 100th birthday on November 9.

Set up as a Pilot Project by local GP and current Life President Dr. Jerry Crowley in 2000, Safe Home Ireland is an Irish emigrant support service that provides a range of services for returning and returned Irish emigrants. The service, a registered charity, has directly supported more than 2,100 people in returning to Ireland since its inception.

The birthday girl has nothing but kind things to say about Safe Home Ireland's founder Dr. Jerry Crowley. She told Midwest Radio: “He never tires – talk about compassion, I’ve never known compassion like it! It’s a lovely feeling.

"I might be 100 years old on the 9th, but I’ll tell you one thing, I think I owe the most of that to Dr. Cowley since I came here twenty-odd years ago…

“I’m well looked after, listened to, and respected [and treated] with dignity… it helps you in your own wellbeing, doesn’t it?

"I have peace of mind, and that is a great thing. And that’s what I’ve had since I came to Mulranny and to St Brendan’s."

We had a very special and memorable day celebrating Mary Caffreys 100th birthday in her beautiful home in Mulranny....

Speaking with RTÉ News about Safe Home Ireland, Caffrey said: “They gave me a new life ... I’m a different person.”