Canadian woman’s Irish eyes are smiling for her 101st birthday

Kathleen Pickard, whose parents emigrated to Canada from Ireland, turned 101 on Thursday and said that her secret to a long life was to "be happy". 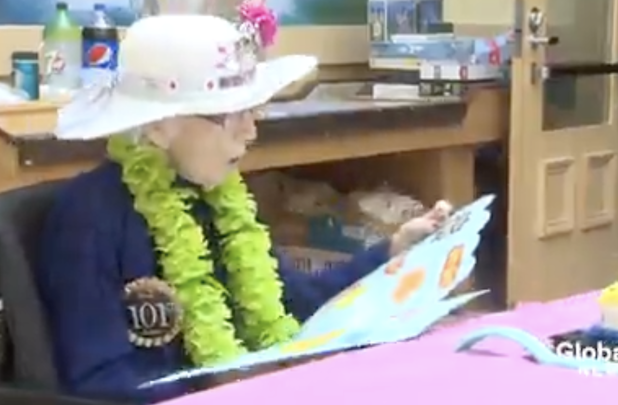 A Canadian woman celebrated her 101st birthday by singing her favorite Irish songs, including the enormously popular "When Irish Eyes are Smiling".

Kathleen Pickard, whose parents emigrated to Canada from Ireland, turned 101 on Thursday and said that her secret to a long life was to "be happy".

Originally published in 1912, the song became enormously popular in Britain and the United States when Irish tenor John McCormack recorded a version of the song during the First World War.

She performed a rendition of the light-hearted tribute to Ireland for Global News Canada as she celebrated her 101st birthday and said that her love of Irish music comes directly from the source.

"My mother and my father were married in Ireland before they came here," she told Global News.

Kathleen Pickard turned 101-years-old on Thursday, celebrating with her friends and neighbours in Saint John.

Her secret, she says, is positivity.

She said that she traveled to Ireland because she wanted to know what it was like and said that her trip to the Emerald Isle was one of the highlights of a century of global travel.

"I wanted to know what Ireland was like, and I went over there."

Pickard said that her 101 years had passed in the blink of an eye and said that the amazing part was that she didn't even feel old.

Pickard currently resides at a care home in Saint John, New Brunswick, and was joined by some of her family members on Thursday to celebrate her birthday.

Meanwhile, her neighbors at the residential home in Saint John said that she lives by her motto of being happy.

"She doesn’t make any noise — except sometimes her music."

"Always be at peace within yourself," she said.