A look at Irish-born singer Maria Doyle's life, career, and inspirational run on The Voice France. 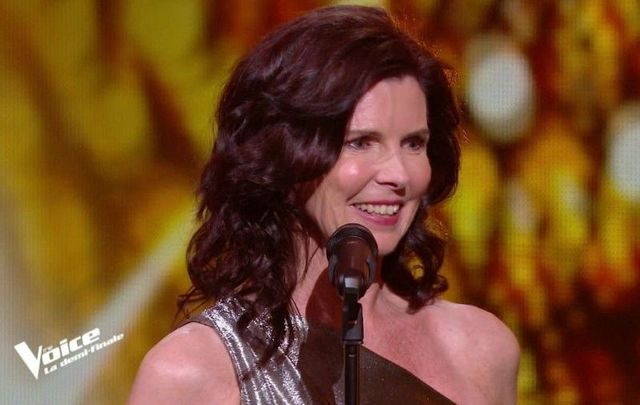 Maria Doyle resplendent while on the The Voice France YouTube

On Saturday, June 6, as many youngsters headed to the “Champ de Mars” in Paris to protest police violence in homage of George Floyd and 24-year-old French man Adama Traoré (deceased July 9, 2016, victim of French police brutality), Irish Mammies shouted at the back of their disappearing youngsters “remember to vote for Maria!” Irish born, 54-year-old Maria Doyle Cuche was a contestant on the semifinals of “The Voice” France.

Maria became blind at the age of 9 as a result of an illness. The family doctor warned her mother that the only job that would be open to Maria in the future would be working as a telephone operator. He didn’t reckon with Maria’s force of character. She had nothing against telephone operators, but she passionately wanted to be a singer and nothing was going to stop her! Her disability did not in any way prevent her from realizing her dreams. She came 6th when she represented Ireland in the 1985 Eurovision with the song “Wait Until the Weekend Comes," she toured the United States singing, and Chris de Burgh once wrote a song for her.

Maria subsequently met Frenchman Emmanuel Cuche in Dundalk, fell in love and got married in the early 1990s. She and Emmanuel moved to France where they have lived in Lorraine, in the northeast of France, for around 28 years. Maria put her musical career to the side to raise her seven children.

However, it seems that now she’s most definitely back, and over the past couple of years, has made a name for herself not only through music but through the promotion of her book entitled “On ne voit bien qu'avec le Coeur,” ("One Sees Clearly Only With the Heart") which was published in September 2018. She appeared on several top French television sets promoting her book before auditioning for “The Voice” France.

She is also using the media attention for a personal quest - she is trying to locate her biological father. She thought if he heard about her, he would remember his romance with her mother when he was a sailor on furlough in Ireland. Maria desperately wants to find Theodore Gonzales Gonzales, the missing link in her life, a man she imagined as a child as perhaps being the real “Zoro.” However, she gained “a father” when her mother married Patrick when Maria was only 18 months old and had a very happy childhood.

Seeing this mother of seven’s radiant face and hearing her voice, which has been described as dove-like, was an absolute inspiration on the eve of Mother’s Day in France. All of her seven children are musicians, five of them accompanied her when she sang “Danny Boy” on “The Voice” in January.

Read More: Tune in: For a free concert in homage to Paddy Sherlock, an Irish musician in Paris

The Irish living in France have been cheering her on from their sofas ever since, and it was in a spirit of great emotion that we looked on as she took to the stage of the semifinals of “The Voice”, in a historic episode filmed in the midst of Covid-19 restrictions.

This season 9 of “The Voice” attracted a record audience for TF1 with an average of between 4.5 and 5 million people tuned in for each episode up till the one which was aired on April 25 and which was the last of the episodes which had been prerecorded before the pandemic hit. "The Voice" returned on June 6 with the structure of the program considerably altered by Covid-19 sanitation rules and logistics.

The twelve contestants in the semifinals represented the 4 judges, three contestants per judge. Maria is on Canadian singer Lara Fabian’s team. On the  April 18 episode in the knockouts, Lara, like the other judges, had to reduce their remaining seven talents to three. Lara chose to keep Maria after she was completely wowed by Maria’s rendition of "Danny Boy" back in January and by Maria’s absolutely earth moving rendition of Barbra Streisand’s "Memory" in the quarter-finals which secured her a place in the semifinals.

Read More: Why are Irish poets on the frontline of the world stage during lockdown?

The semifinals aired Saturday, June 6 and featured the contestants recorded during lockdown performances which were performed in a mock “live ambiance." Three of the judges were at the TV studio for the semifinals, but Lara Fabian, locked down in Montreal, connected by satellite.

In a recent Sud Radio interview, Maria mentioned that she had an advantage; unlike the other contestants, she is used to being obliged to visualize situations, and for her, it was just one more performance where she had to visualize the audience, albeit this time there was no audience.

Instead of being filmed at “The Palais de Sport” before a live audience, this episode was filmed on the newly and specifically constructed Covid-19 respecting studio set. Nikos Aliagas presenter of “The Voice” explained how temperature checks, social distancing, masks, and hand gel were all a mandatory part of the event. This semifinal also set a precedent as it was the first time ever the public was given 100% control of the vote, by telephone, to choose the four finalists.

We saw the performers, filmed backstage, faces partially hidden with Covid-19 masks, but when Maria stepped onto the stage, unmasked, resplendent in her gold lamé, off one shoulder dress, all the star quality was there. On the Sud Radio interview, Maria said that she had deliberately chosen to sing in French, and choose “Hymne à l’amour” (A Hymn to Love) by the mythical Édith Piaf with whom she feels a strong bond. It was a risky choice but her rendition was spectacular and heartwarming.

Maria has touched so many through her voice, her spirit, and by being the very personification of love herself. She was accompanied by two of her seven children, Emmanuel her son on the piano and Shannon her daughter on the violin.

When Lara commented and praised her performance she also said that Maria had touched her so much that she felt she had become a better person due to meeting her. She commented on Maria’s celestial quality and how she literally generates hope through her voice and her person. From the first time Lara heard Maria sing, a deep tie was woven between the two women. Maria nicknamed Lara her “guardian angel” and said as such it didn’t matter that she was connecting from Montreal as in any case she was beside her and she was “her eyes”.

Before the bailiff appeared with the results of the public’s vote, the four judges sang (with Lara connected by satellite), “Les Mots Bleus” in memory of the much loved French singer “Christophe,"who passed away at 74 years old on April 16 in the midst of lockdown.

To date, Maria has taken part in “The Voice” Ireland, “The Voice” France, and has already represented Ireland in the Eurovision. She dreams of representing France in the 2021 Eurovision and already has her song “Vive L'amour” ready, it’s her own composition. She said her song  “evokes France, living in peace, harmony, and love. It is a bit like Edith Piaf. I feel like she sent me this song. At the time I was pregnant with my daughter and it just came to me."

Although Ireland is her country of origin, France and the Lorraine have been her adopted ‘homeland’ for 28  years, and representing France next year could be the icing on the cake of her singing career, making an even two of “The Voice” and two Eurovision’s.

Unfortunately, despite her stunning performance, Maria wasn’t picked by the public to be one of “The Voice” France finalists on June 16. However, on the Sud Radio interview, she pointed out that in a way she had already won. Since 2018 she speaks of her handicap, which she was reluctant to do before. She is aware that along with bringing joy and energy to people, she bears a strong message “I became blind at 9 years old and if I can do it, you also can live your dreams." She feels her blindness made her stronger and finally became a sort of strength rather than a handicap. She and her family also have the wonderful memory of her performances, with her children playing in her backup groups.

I see Maria remaining in the limelight for a long time to come. As well as being a fabulous singer, performer, and writer, on a personal basis, Maria touched me deeply and I have often thought about her resilience during this difficult lockdown period. Maria, is extremely attractive and a great talker with a keen and fast wit. I could see her as “an influencer,” a type of motivational coach, and as she’s been a great asset to any TV show she appeared on, I can see her in my mind’s eye appearing on Ryan Tubridy’s mythical “The Late Late Show” or on “The Jimmy Fallon Show” in the US.

Despite huge efforts by TF1, the semifinal of “The Voice” France attracted a considerably lesser audience (3.9 million) than episodes previously aired during the complete lockdown. Had another station been more seductive or had the post confinement French given preference to real life over reality TV?