Irish woman Patricia Killeen, who is now living in Paris, reflects on Northern Ireland's legacy of music as she prepares to visit for the first time in decades. 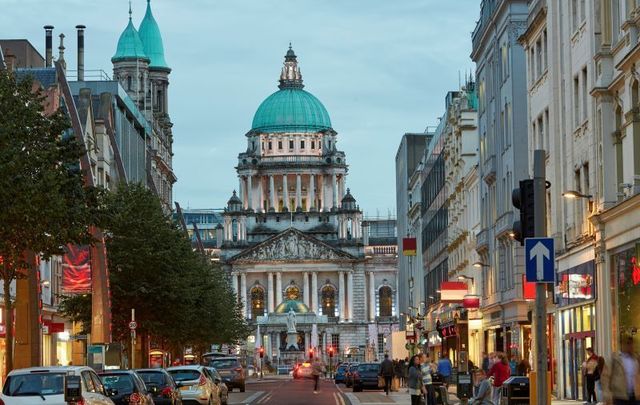 Northern Ireland has a legacy of homegrown musical talent

Last year at the Lisdoonvarna-Paris, Franco-Irish ball, as we listened to Tomás Ó Cillín’s singing “Will Ye Go, Lassie, Go?” (aka “Wild Mountain Thyme” and “Purple Heather”), French friends asked me “can we go with you to Ireland next summer, to the Wild Atlantic Way?"

I assured them “sure we’ll all go together.” Little did we all know the best-laid plans of mice and men would be overruled by Covid-19…

“Will Ye Go, Lassie, Go?” is a fairly recent Irish folk song, composed by Francis McPeake from Belfast and first recorded by him in 1957. The song was inspired by Scottish ballad "The Brae o' Balquhidder" by Robert Tannahill, first published in the 18th century, and was thought to have been based on an even earlier work of an unknown artist. Because of the Scottish connection, there is some controversy over the song’s origin.

However, the version we know is indeed an Irish ballad. It’s funny, before I even knew the composer was from the North, I associated this song with a stunningly beautiful area in Enniskillen, Fermanagh, even though McPeake was probably continuing Tannahill’s references to the hills (braes) around Balquhidder near Lochearnhead in the Scotland highlands.

The ballad is short in comparison with many Irish ballads, however, its melody and lyrics are so expressive and catchy it’s been sung by most Irish and Scottish folk singers since McPeake wrote (or adapted) and recorded it. It has also traveled the world, and was sung by the greats: Joan Baez in 1965, Marianne Faithfull in 1966, Nana Mouskouri in 1970,  Bob Dylan in 1971, and more recently by Ed Sheeran in 2013.

I had the urge to go to Northern Ireland, and before Covid-19 turned our way of life on its head, had planned to visit Belfast and Enniskillen this year. Since I first visited Enniskillen many years ago, I always vowed to go back.

As it turns out, although traveling to the Republic is highly complicated with the 14-day quarantine currently in place, traveling to Northern Ireland from France is without travel restrictions for the moment. I plan to fly from Paris on EasyJet and already have my ticket for early September (€57 roundtrip) and will book into the Merchant Hotel, the former headquarters of the mid-nineteenth century Ulster Bank whose historic walls house what was voted in 2010 as the “World's Best Cocktail Bar."

In respect of Covid-19 regulations, the historic hotel has currently shut its rooftop steam room, rock sauna, and hot tub with panoramic city views. Otherwise, life in Northern Ireland seems to continue with some kind of normalcy, while observing and respecting the by now well-practiced pandemic gestures, somewhat akin to regulations in vogue in my current life in Paris.

We were allowed off the bus for a quick lunch stop in Belfast and since I didn’t know anyone else on the bus, I wandered off by myself in search of a sandwich. I wandered into a no-go zone and was escorted back to the bus by the British Army, flanked on both sides and at the rear by surreal, camouflage uniformed, black booted and heavily armed soldiers. The poor bus driver got a telling off for letting this eejit wander around Belfast by herself.

Of course, I knew about “The Troubles”, but perhaps because we didn’t have a TV at home in Dublin, and the grainy black and white newspaper photos, although horrific, hadn’t fully woken me to the reality that there actually was a war going on in my country.

However, with a military escort through a war zone, the penny finally dropped with a thud. I left Ireland at 21 and, apart from my brief visit to Enniskillen about 20 years ago, September 2020 will be the first time I’ll set foot in Northern Ireland since my teenage arrest.

On my upcoming three-night stay, I also hope to find a Covid-19 safe music gig. The Northern Irish music scene is currently absolutely hopping with contemporary talent and its contribution to the musical landscape over the past few decades has been huge. Van Morrison, one of Northern Ireland’s most famous exports, started out as a window cleaner on the streets of Belfast before initially finding fame as the lead singer of the R&B band Them.

The more I studied Irish folk and country music in the lead up to the Paris ball last year, the more I realized the tremendous mark Northern Irish musicians and lyricists have made on our culture. In the early 70s, some of the best Irish showbands played in the North. Three members of The Miami Showband (aka The Irish Beatles) were massacred by members of the UVF on July 31, 1975 in Co Down; two survivors had been left for dead, and the sixth band member, the drummer, hadn’t been with the band on their bus.

Many of our Irish country stars hail from the North, such as Philomena Begley (Tyrone), and Dominic Kirwan and his singing sons Colm and Barry (Omagh). Others, like Lisa McHugh and Nathan Carter, were born in Scotland and England but had parents from Tyrone.

It might not only be a question of huge talent, but the legacy of a desire for the joy of music and dance that people from war-torn areas cherish. A love of country more complicated to express, but yet so needing expression, a romanticism and need to carpé diem mixed with an honesty and pragmatism that strike chords with people not only all over Ireland, but the world over.

In “Will Ye Go, Lassie, Go?” the composer states if his love was gone, "he’d surely find another,” not at all what we are used to hearing in Irish folk songs where once bitten by love, the lyrics usually portray heroes who would prefer to die before moving on. It seems the love of the countryside and perhaps posterity overrides romantic love in McPeake’s pragmatic words. (I didn’t find the same line in the old Tannahill’s lyrics.)

Now, I hope I’m not spoiling it for anyone, but didn’t the protagonists from Sally Rooney’s "Normal People” opt for similar pragmatism mid-season? Isn’t that usually the way life often goes? We so often just have to move on…

Those of us lucky enough to be alive and moving on these days can count our blessings. With 103° Fahrenheit, “The Summer Time” has definitely come in Paris, and this Lassie is looking forward to visiting Belfast and Enniskillen and filling in more Irish cultural blanks, while scrupulously following regulations and respecting our dearly departed.

I hope to come back with new inspiration for the second annual Lisdoonvarna-Paris, Franco-Irish ball, which hopefully will take place around May 2021, along with a clear vision for recreating a 1970s Irish ballroom event in Paris, to pay homage to the Miami Showband before the end of 2020, the year which marked the 45th anniversary of the atrocious and scandalous massacre.

Stay safe wherever ye are. Go n-éirí an bóthar libh!

Oh the summertime is coming

And the trees are sweetly blooming

And the wild mountain thyme

Grows around the blooming heather

And we'll all go together

All around the blooming heather

I will build my love a tower

And on it, I will build

All the flowers of the mountain

If my true love she were gone

I would surely find another

Grows around the blooming heather