Why are Irish poets on the frontline of the world stage during lockdown?

During the “Cercle Littéraire Irlandais” Zoom meetings, Irish expats in France came up with some answers. 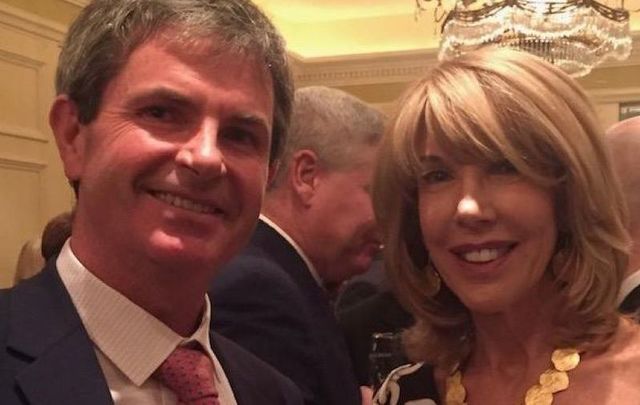 Dr. Desmond McGetrick, CLI, with H.E. Patricia O’Brien, Ambassador of Ireland to France in Dublin, at the France-Ireland Business Awards 2018

In difficult times the Irish psyche often finds comfort in the words of our poets. This April, instead of enjoying an avalanche of poetry for a few days around “Poetry Day Ireland," we were delightfully inundated with poetic words from the outset of the pandemic; one of the few upsides of lockdown. We have been enjoying not only the aesthetics of poetry but using the words as an ongoing salve, anointing for many of us a pandemic driven diasporic loneliness, helping us grieve and to find sense in the midst of an unprecedented situation; enabling us to “go on.”[1]

Many of the approximately 24,000 Irish living in France live in the “Ile de France” (the "Paris Region"), one of the hardest hit by Covid-19. Of the over 28,000 deaths from the virus in France, more than 6,000 have died in this region. At this point, many of us know people who contracted the virus, and some who became seriously ill or even died.

Revisiting favourite poems and discovering new ones has been for the most part courtesy of the “Cercle Littéraire Irlandais,” CLI, which introduced weekly Sunday Zoom meetings at 5 pm, starting on Easter Sunday. Each Zoom is sprinkled with special guests, poets, readers, musicians, and with Dr. Desmond McGetrick, Chairperson of the CLI, in the role of host. Participants also have the opportunity to take the Zoom floor to ask questions and comment.

As I used their words to “heal," I pondered on the worldwide reputation of Irish poets, past and present. I listened to Patricia Costello read "And the People Stayed Home," by Irish American teacher Kitty O’Meara at the Sunday, 19 April CLI Zoom meeting. O'Meara's poem on the COVID-19 outbreak went viral; she has been dubbed “the poet laureate of the pandemic."

I also listened to the 2016 Nobel literature laureate Bob Dylan’s latest song “I Contain Multitudes” released on 16 April 2020, an ode to his own 78-year-old life. Scholars claim he makes reference to Irish poets Antoine Ó Raifteirí and W.B. Yeats in the song.

During the lockdown CLI Zoom meetings, I asked poets, musicians, university professors, and Irish people from every walk of life their opinion on why our poets might be “simply the best." Per capita, Ireland has spawned an incredible abundance of fine poets. Participants at the Sunday 3 May CLI Zoom meeting said they thought many factors, including our education system, the beautiful Irish landscapes, the banter, Celtic legends, our history, oppression, Risings, and even our fairy rings, might all have impacted the excellence of our poets’ words.

Poet, playwright, and “cultural activist” Maria McManus was interviewed at the Sunday 26 April CLI Zoom meeting by Nora Hickey M’Sichili, Directrice of the Centre Culturel Irlandais, CCI. The honesty of the interview and the raw and inspiring dialogue evoked extraordinary wartime interview moments, in our own pandemic moment.

After the interview, I asked Maria her thoughts on Irish poets. She spoke of how poets mirrored the culture of ancient Rome where designated people (augurs) interpreted the will of the gods (the auspices) from the flight patterns of birds. She also spoke of Tuatha dé Danann and the Fir Bolg and a mystical “fifth province” of Ireland, a province of the imagination, where inspiration can be drawn from.

From personal experience, she has found that periods of uncertainty and doubt can actually be a springboard before delving deep within herself and writing. She read poems from her book “Available Light”[2]; “Fear” which has brought comfort to so many during the pandemic, and “A Nightingale” written in memory of Marie Wilson, a young nurse killed in the Enniskillen bomb on 8th November 1987. McManus’s beautiful words resonated with relevance, wisdom, elegy, reconciliation, and hope.

It seemed as if during difficult times, poets come into their own as “unacknowledged legislators of the world"[3], framing events in a way, no other medium, not even the lens can rival. In the midst of the Covid-19 Pandemic, Irish poets’ voices, past and present have been omnipresent, defusing fear and anxiety as they often gently point out that even in the midst of turmoil, there might be a silver lining.

Read More: Finding my lockdown feet in Paris with a little help from my friends

I also asked Irish musician David Kitt, who was interviewed by Gráinne Dirwan, President of TCD Alumni, at the 3 May CLI Zoom meeting, what was so special about Irish poets and songwriters. He remarked that the Irish language and its rhythm hovering behind the English words we speak and sing makes for much of the magic.

David has released six albums to date and treated us to two of his original compositions, “The Song of Two Birds” and “Saturdays.” His lyrics have all the magic of an Irish poet’s and there will be plenty more to come. During his monastic residency in the CCI, locked down in creative dream-like abstraction, he is completing many of the songs he started before confinement.

David’s remark reminded me that after the Great Famine (1845-1852) there had been a big shift from speaking Irish to speaking English. In the early 1900s instead of writing in Irish and translating to English, John O’Leary [4] suggested Irish writers and poets should write exclusively in English. He felt Irish was dying out and confided to W.B. Yeats that there should be a new Irish literature, written in English by Irish people but completely representative of the Irish national spirit and imagination. These new works - written in English, fuelled by the Irish imagination, melodious and at times in wild Hiberno-English speech with its extensive use of metaphors and transliterations from Irish - projected Irish poets into the spotlight of a global stage.

Yeats himself was Anglo Irish and not an Irish speaker. However, he learnt Irish so that he could input the gist of it behind the English he wrote, appropriating the words of his poems with deliberate “Irishness." He often also deliberately reproduced the musical rhythm of Irish in English, like in “The Lake Isle of Innisfree” where he transplanted ‘the syllabic measures and stresses of Gaelic poetry into his poem.[5] This poem was widely circulated among the Irish living in France during the pandemic.

By the 1920s, Irish poets had demonstrated their writing, in English, was still very much part of Irish identity and “Irish English” became a poetic language par excellence. Yeats won the Nobel Prize for literature in 1923. One hundred years later in David Kitt’s, and other Irish poet’s and songwriter’s wordsmithery, an Irish palimpsest under their English words still exists and transcends. Poet Seamus Heaney, another Nobel literature laureate (1995), who often also wrote in Irish, said that for Irish writers and poets English had become ‘not so much an imperial humiliation as a native weapon’. His poems written in English are known and lauded the world over.

It seems from the Fili and Bards down, we have been privileged to bask in the wonderful words of our poets whose voices bring joy and solace. While the medical corps has looked after our bodies, poets looked after many of our souls during lockdown. Let’s applaud our Irish poets who in the roll call of history have always answered present with their pens.

Deconfinement started in France on Monday 11 May. However, like in Ireland, it is a gradual process. The CLI Zoom meetings continue accompanying us with the resumption of “normal life” and we are looking forward to 24 May’s Zoom when Peter Donegan (award-winning Irish landscape architect) and Sean Byrne (award-winning Irish fashion designer), among other special guests, will regale us in a Zoom ‘showcasing Irish talents.'

We are all also looking forward to the 31st May CLI Zoom meeting when Professor Clíona Ní Ríordáin, Sorbonne Paris 3, will remember Eavan Boland's Life and Work. Boland, who died 27 April, in the midst of the pandemic, leagued a testimony of words, including “Quarantine;" never more relevant.  H.E. Patricia O’Brien, Ambassador of Ireland to France, has confirmed her presence for this special commemorative CLI Zoom.

The zoom meetings will continue until June 21 when special guest star Paddy Sherlock will sing and play the guitar and trombone, and bring the final Zoom house and curtain down. Known for his ‘Funky Punky New Orleans and Irish Street grooves’, Paddy is also a songwriter. He also generously fosters new talent in Paris through his ‘Paris Songwriters club’ and has hosted a free mini-concert every single day of lockdown on Facebook.

They say all good things must come to an end. But will we be willing to forfeit our Sunday pm Zoom meetings in lieu of five-hour lunches with French friends and relatives, and to be stuck in traffic either side of lunch? Will we embrace life as it was before, or might we think that lockdown Sundays were better when we just had to switch on our computers to be royally entertained?

Wherever you live you are welcome into the lockdown parlour of the CLI Sunday Zoom meetings, Zoom connections permitting. Reach out to Desmond McGetrick on CLI's Facebook for the full program and connection details and we’ll look forward to greeting new lockdown friends before returning to “business as usual,” or not.

For the Irish in the “City of Light,” continuing with lockdown habits like Zooming poetry, song, music, banter, and craic might well prevail; at least until we can Zoom it all to an Irish Pub in Paris – when the pubs reopen!

[4] Irish republican and a leading Fenian and poet.