How Kenmare Street in New York City got its name 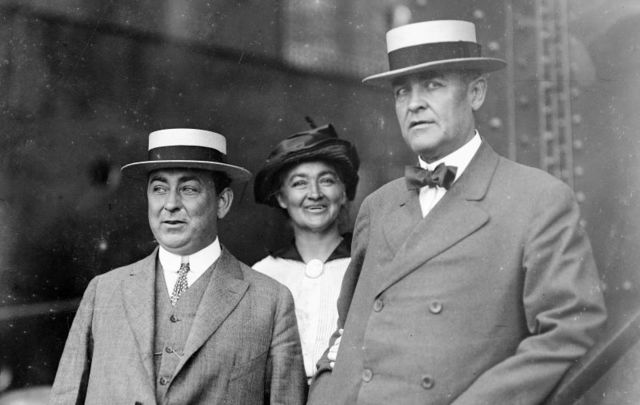 Larry Mulligan and Tim Sullivan circa 1913. US Library of Congress / Public Domain

Kenmare Street, on the Lower East Side of Manhattan, just above Little Italy, was named after an Irish immigrant’s mother.

The story of Kenmare Street is one of famine, enforced emigration, New York tenements, politics, and how a kid from the slums of the 'Five Points' got to name a street in Manhattan after his mother's home town of Kenmare.

In 1849 the population of Ireland was suffering the horrors of Ireland’s Great Hunger. Poverty, disease and hunger were rife.

William Trench, the agent of Lord Lansdowne landlord of the Kenmare Estate in Kerry, took a census of the local population and realized the situation was untenable.

Trench recommended the estate could cut costs if they sent a portion of the destitute population to the United States and Canada. The cost of the trip would cost less than food and lodgings for one year in a Kenmare workhouse. The cost of passage to North America was £5.

Despite the harsh weather of a winter passage and no appropriate clothing, thousands took them up on the offer. Many survived and landed in New York where they settled in the notorious neighborhood “Five Points.”

The area (Baxter Street, Orange Street and Worth Street, in what is Chinatown and Little Italy today) strained under the massive influx of immigrants at the time and living conditions were famously awful. However, many Irish found some work in tanneries, taverns and selling food on the streets.

One of the residents, Tim Sullivan, was the son of Kenmare immigrants Daniel O’Sullivan and Catherine Connelly. Sullivan started off shining shoes and doing paper rounds. He soon began running the newspaper distribution, before developing bars, and theaters and ending up in politics.

Known as Big Tim or Big Feller, he was one of the city's most powerful politicians in the first decade of the 20th century.

Richard F. Welch, a New York historian, who wrote “King of the Bowery: Big Tim Sullivan, Tammany Hall, and New York City From the Gilded Age to the Progressive Era" describes his legacy.

“Profoundly Irish by birth, heritage and experience, the new district leader held little in the way of ethno-religious prejudices and took people as he found them.

“Brought up in abject poverty himself his worldview was refracted through a prism of class-consciousness that owed nothing to theory or ideology and everything to experience and practicality.”

“Sullivan was a master of mass politics in an age when personal contact was everything,” he writes.

“The loyalty he engendered in the multiethnic population below 14th Street was based on his big-hearted solicitude for his constituents.”

Sullivan founded Kenmare Street in 1911, in memory of the town his mother emigrated from.