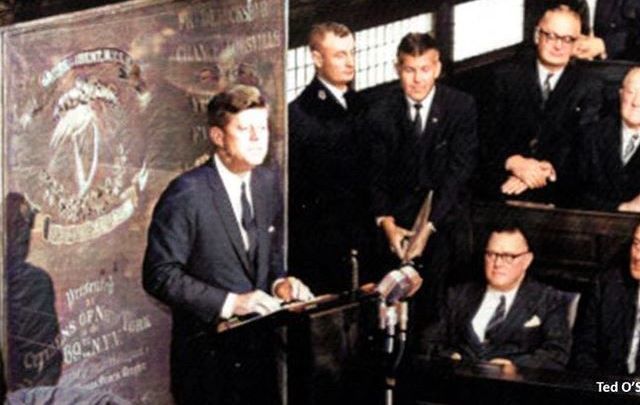 In recognition of March as Irish American Heritage Month in 2019, the Ancient Order of Hibernians created a video celebrating the story of the Irish in America.

The one-minute video uses excerpts from President Kennedy’s June 28, 1963 speech from to the Oireachtas Éireann; the first sitting United States president to visit Ireland, and features images of Irish Americans ranging from the anonymous to the famous.

The video opens with an image of the statue of Annie Moore and her brothers, the first immigrants to pass through Ellis Island, and reminds of the prejudice and hardships which Irish immigrants faced. Specifically noted is evidence of ads with the phrase “No Irish Need Apply”, which revisionist historians have recently attempted to claim were a myth.

The Hibernians hope that amidst all the rightful celebration surrounding St. Patrick’s Day that the video will serve as a reminder as to the reason behind the day; tangible evidence as to why Irish Americans are proud of their roots and a call to action to pass on and enhance this proud heritage to the next generation.

The video closes with President Kennedy’s exhortation “It is that quality of the Irish--that remarkable combination of hope, confidence, and imagination--that is needed more than ever today”.