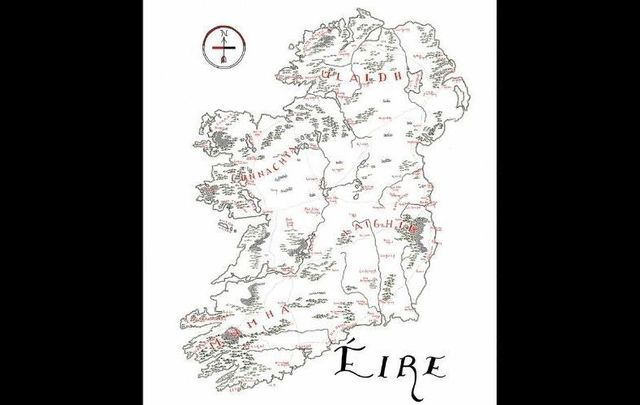 An artistic map of Ireland that features Irish-language placenames has been crafted by Isaac Dushku - "Lord of Maps" - in the style of "Lord of the Rings" author J. R. R. Tolkien.

Isaac Dushku, aka "Lord of Maps," is quickly becoming famous for the quality of his artistic maps, especially a newly-created map of Ireland. His stunning maps are gaining him more and more followers on his social media feeds, which has allowed him to turn his talent of artistic cartography into a full-time business.

The talented mapmaker told IrishCentral back in 2020 that he decided to draw a map of Ireland because of the reputation Irish people have in America of being proud of their country. He didn’t realize when he started the project that the Irish had their own language, but as soon as he heard about Gaeilge, he decided to draw a second map in that language.

“New-Zealand was my first international map," Dushku said. "I wanted to capture audiences that live in a beautiful county and have a lot of national pride. The reputation that the Irish have in the US is that they absolutely love their country.

“I posted my progress on Ireland on my Instagram. I had written out CONNAUGHT and MUNSTER and the other provinces. Some people said, and I am grateful that they did, that I should ditch the colonial spelling and do it in Irish,” he told IrishCentral.

Guesses?? . . This has the potential to be my most controversial map. I don't really know what the sentiment is between the north and the south, but I have heard the song "Zombie" by the Cranberries. . #ireland #lordofmaps

He said he didn’t realize that the Irish language existed at all until he drew the English version of the map and that he needed a lot of help to make the Irish version of it.

“Like a fool, I didn’t even know there was an Irish language. Lo and behold, there is and lots of people still speak it. But I needed a lot of help. I crowdsourced my information from Irish people. Some had an extensive knowledge of the Irish language and others had a simpler knowledge.

“It was really fun to talk to people thousands of miles away about a land they love so much. I have never been more inspired by a map or by a people than by the Ireland map and the kind people that I have had the privilege to work with,” he said.

Dushku is 22 years old and lives in Centerville, Utah with his wife, who was expecting a child at the start of 2021. He was a student when he started ‘Lord of Maps’ in early 2020, but the company is now a full-time business and has hundreds of customers.

“I have never thought of myself as an artist. I just never thought I was that good! The most drawing I do is usually on the back of my maths assignments, or when I should be taking notes in class. That being said, I learn very quickly and saw a great opportunity in the world of map-making,” Dushku told IrishCentral.

It was in March 2020 that he first posted a picture of one of his maps — of his home state Utah — on social media, the spark that started ‘Lord of Maps’.

“I drew a very simple map of my home state in Tolkien style on a normal piece of printer paper and made the uncomfortable decision to my post it on my Facebook, which I never do. To my surprise, a friend of mine offered to purchase that crude map. Then it hit me: there’s a demand for this! I drew a larger and more detailed map of my home state and posted it on Facebook Marketplace.

“People started asking me to do other states and wanted to purchase my Utah map. Holy smokes! Pretty soon I was coming home from class and would immediately start drawing. I was not used to it and my hand would hurt like crazy.

Detail on the Utah Map. I climbed Kings Peak....it totally was awful. We started at 7 am and made back to camp at 9 pm. Not only that, but we lost two scouts. We found them. Well, search and rescue found them after 24 hours. My poor buddy got to take a helicopter flight while the rest of us walked back to the parking lot. Thinking back on that experience, I can't help but imagine just how amazing it would be to have beakons on all the peaks of the Unita and Wasatch mountain ranges. Can you imagine Provo calling for aide to Logan? Lighting each towering beakon? Cool thought #kingspeak

It was his brother, an employee at Facebook, who set him on the path to internet success and advised him to try to make proper money from his craft.

“It was mostly just a fun source of side income until my brother suggested something that would change my life. He works for Facebook and is very knowledgeable about Facebook advertising. Long story short, once we started running ads, this became a full-time business. I have completed sixteen maps of states and countries and have grown my business to have a worldwide impact. In March I had 140 followers on Instagram and now I have over 14,000,” he said.

Irish Ireland . This has been the trickiest map I’ve ever made. But I had a lot of help and some awesome suggestions from real Irish people! And the best part is that this is available for Pre-Order on lordofmaps.com! . What do you think? I can still change things within reason. . Enjoy #eire #lordofmaps

Tolkien’s famous style attracted him first because of Isaac’s love of the stories themselves. Tolkien created a “charming, magical, and realistic world” in the books The Lord of the Rings, and the maps, which the author drew by hand, added greatly to the works.

“I love looking at the hand-drawn mountains and learning the names of the little villages and rivers. To be honest, I know Middle-earth geography better than I know the geography of most countries!” he said.

Dushku intends to draw all the states of his home country, the USA, as well as maps of other European, Asian, and African countries.

*Maitiú Ó Coimín is the editor of NÓS magazine, where a version of this article was first published in Irish.