One hundred years ago, IRA volunteers carried out two ambushes which took place in Cork and Kerry. 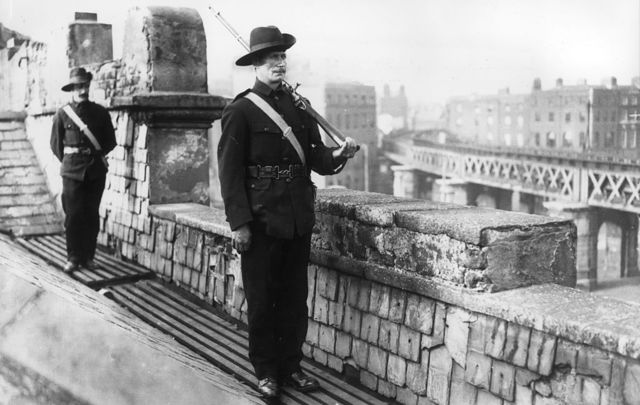 1914: Members of the Irish National Guard on duty on the roof of Liberty Hall, Dublin. Central Press/Getty Images

One hundred years ago, IRA volunteers carried out two ambushes which took place in Cork and Kerry.

The ambushes were similar in style and substance as they demonstrated the primitive supplies the IRA had in the early days of the War of Independence but, these particular ambushes also showed the sheer determination of the ill-equipped freedom fighters against the better-equipped enemy.

The ambushes took place just a week apart in June 1919 and would lay the foundations for larger-scale actions in Cork and Kerry in the months that followed.

June 16, 1919, in the parish of Rathclarin which lies in the barony of Carbery just a few miles southeast of Bandon, one RIC constable and five British soldiers were ambushed and disarmed by 14 volunteers from the local IRA company.

The military patrol was returning from Burren Pier. They had responded to a call regarding a large containment of timber which had been thrown into the sea there. The patrol which consisted of four privates and one corporal from the Essex Regiment were accompanied by Constable Daniel McMorrow. As the patrol came to a crossroads on that Summers evening a number of men jumped out from over a ditch at the rear and front of them. The men were brandishing sticks and hurleys and took the armed enemy by complete surprise.

A hard hand-to-hand fight took place at the crossroads in Rathclarin and the IRA volunteers overpowered the British soldiers and the RIC constable but, not without injuries.

Volunteer Michael O'Neill was hit unconscious with the butt of a rifle by one of the British soldiers. When the defeated British soldiers and constable were disarmed and tied up, the injured O'Neill was carried by Volunteer Jer O'Neill on a pony and trap to a doctor in Ahiohill where he recovered.

The ambush was not sanctioned by IRA HQ but, their action was rewarded with five rifles, one revolver and 20 rounds of ammunition. Lieutenant Crowley would later die in the fight for freedom when the 26-year-old Kilbrittain man was shot by the tans in February 1921.

Following the Rathclarin ambush, the authorities raided several houses in the area, including many of those involved in the ambush.  The homes of the O'Neils and the Mahoneys were raided 17 times over the course of one week!

During these raids, men were strip-searched to see if they had any cuts or bruises from the hand to hand fighting. For weeks after the Rathclarin ambush, a ring of steel was placed around the area and a curfew of 10 pm was placed on those living there.

Over the county bounds in Kerry, a similar action took place against the authorities on June 24, 1919. Sergeant Bernard Oates of Camp RIC barracks and Constable JJ O'Connell were ambushed at Meenascarthy while cycling back from a patrol in Aughacasla. The sergeant was unarmed but the constable had a rifle and ammunition.
The IRA ambush party consisted of volunteers Michael Spillane, Michael and Martin Griffin and Michael Flynn. They were led by John Crean,  o/c of the Aughacasla company.
The ambushers lay in wait behind the gate at the Fitzgerald homestead at 8 pm on that Summer evening as the two RIC men were approaching. The only IRA man armed that night was Crean who brandished a revolver while the rest had only blackthorn sticks.
Sergeant Oates was some 50 yards in front of Constable O'Connell when Crean gave the signal and then the ambushers rushed out to tackle the RIC men. Sergeant Oates was struck by Martin Griffin and before Constable O'Connell could reach for his gun he too was struck by a stick to the head which rendered him unconscious. His rifle and six rounds of ammunition were taken and the bicycles were smashed up. The ambush party then quickly left the scene and headed in the direction of Aughacasla.
Following the ambush, the authorities swept into the area and raided all homes. Among those raided were the homes of the Spillanes, Flynns and Griffins and all arrested. Although they never took part in the ambush, Michael Maunsel and Tim Spillane were also arrested, guilty by association you might say!
Tim Spillane received three years penal servitude, Michael Spillane got 18 months hard labor, as did Michael Flynn. Maunsel was given 15 months of hard labor while Martin Griffin got nine months. The men were to spend their sentence in Cork Gaol, Mountjoy and Port Laois.