On the night of August 14, 1919, Francis Murphy was at home in Glann reading a book by the hearth. 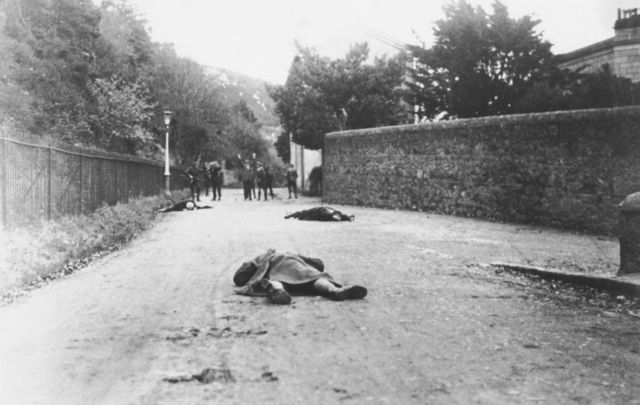 The bodies of dead Sinn Féin supporters lie in the foreground, and in the background, a group of men is arrested by the Royal Irish Constabulary, Ireland, November 1920. Topical Press Agency/Getty Images

County Clare was rocked by the shocking murder of a 15-year-old Fianna Boy Scout 100 years ago.

On the night of August 14, 1919, Francis Murphy was at home in Glann reading a book by the hearth. Just after midnight, the teenager's father was woken by a loud crash of glass. He rushed to the kitchen where he had left his son reading his book by the fireside and to his horror he found him lying dead in a pool of blood. Bullets had been fired through the window by masked men. The murder was seen as an act of revenge for the shooting of two policemen in the area just days previously.

On August 4 an ambush took place in Ballyvraneen at a place known locally as 81 Cross, some three miles outside Ennistymon. The ambush resulted in the deaths of two RIC men.

Sergeant John O'Riordan and Constable Michael Murphy were returning from their rounds in the area shortly after 11 o'clock that night when IRA volunteers opened fire on them from behind a ditch at 81 Cross. The sergeant and constable returned fire but a bullet brought down Constable Murphy killing him instantly. Another bullet hit Sergeant O'Riordan who died shortly later.

Even though young Francis Murphy had played no part in the ambush that claimed the lives of two constabulary men, he was targeted because he was a member of Na Fianna Éireann - the boy scout wing of the Irish Republican Army.

Clare, particularly around Ennistymon, heaved with a tense atmosphere during those days in August 100 years ago. Anyone with any sympathies or leanings towards the Irish independence movement were seen as fair game in the eyes of the occupying forces, the same forces who saw fit to kill a teenage boy in his own home sitting by the fire reading his book.

In his Witness Statement for the Bureau of Military History, Michael Knightly of the 1st battalion, Dublin Brigade IRA, described the aftermath of Fian Francis Murphy's murder while on a visit to Clare in August 1919.

He states: "On returning to Dublin I went to Sinn Fein headquarters and informed Mr. Arthur Griffith that in no doubt young Murphy had been shot by crown forces. Mr. Griffith attached considerable importance to the matter and appeared to think that it would be a serious blow to British rule in Ireland if it could be proved that their forces had resorted to such measures.

“He engaged Mr. Patrick Lynch, Kings Counsel, to attend the inquest on behalf of the Murphy family. I attended the inquest as a reporter and gave what assistance I could to elucidate the facts. A verdict of murder against British crown forces was returned."