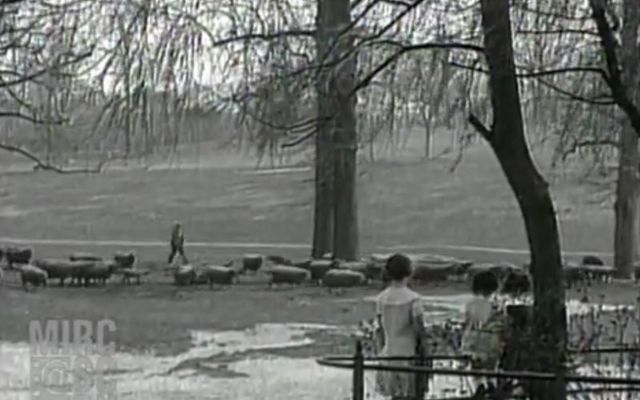 Sheep were once used to maintain grass in urban parks. Brownstoner YouTube

Rare news footage from 1929 captures an Irish shepherd guiding a flock of sheep through Brooklyn's Prospect Park for a springtime stroll.

Irish shepherd John McLaughlin guides the sheep through Prospect Park's Long Meadow in the rare footage with the help of two border collies - King and Mike.

The rare newsreel footage, shot in April 1929, follows McLaughlin through the park and also includes an interview with a young girl at the end.

His young interview, who is seen holding a newborn spring lamb, ends the minute-long footage by proclaiming that "there's no place like the USA".

It was common practice to use flocks of sheep to maintain grass in urban parks at the turn of the 20th century and Brooklyn's Prospect Park was no different.

McLaughlin took over the herding duties at the park in 1922 when James O'Hara stepped down after more than 35 years in the role.

The number of sheep at the park fluctuated annually and McLaughlin kept roughly 35 sheep in the summer of 1928. The herd was culled every year, with older sheep sold off annually and around 30 lambs born every spring.

McLaughlin kept the sheep in a specially-made pen near Brooklyn Zoo.

Sheep grazing in Prospect Park ceased as a practice in the late 1930s.