A look at Donegal native Vincent Coll, who went on to be one of the most notorious gangsters in 1920s New York City. 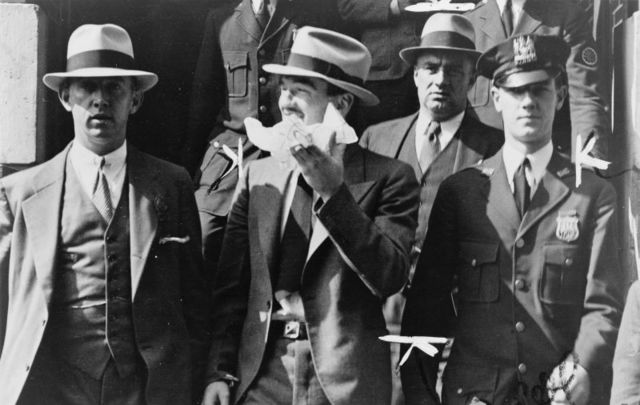 The United States has always opened its arms to the huddled masses of Irish men and women, who have left their native land for a better life, and most have repaid this hospitality many times over.

22 of the 45 presidents of America claim Irish descent. The first man on the moon Neil Armstrong’s ancestors came from Fermanagh and Tyrone. In the world of business, Henry Ford, the inventor of the modern assembly line, considered himself both an American and a west cork man.

When you think of the Irish in America, an iconic image is of the cops who pounded the beat of New York and other major American cities such as Boston and Chicago.

However, an unsavory side to the Irish in America has always been the rise of and violence of the Irish Gangsters, many of whom became America's most wanted criminals.

I would like to share with you the tale of a man who was probably the most vicious gangster of his era, and he was up against some pretty stiff competition, Vincent ‘Mad Dog' Coll who died on this day 8th of February 1932.

Vincent Coll was born Uinseann Ó Colla on July 20, 1908 in the Irish speaking parish of Gweedore. A beautiful but impoverished region of County Donegal, whose biggest industry in 1908 was emigration.

Coll's parents decided to leave for America in 1909 and they settled with the 1-year-old Vincent in the Irish enclave of the Bronx, in New York.

A difficult child, Coll was constantly in trouble and was expelled from several local Catholic schools. Before he even reached his teens, he had left formal education for another form of learning, that of the art of crime with a local gang called the Gophers, led by Owen ‘Owney’ Madden.

While school books had shown no attraction, Coll was a fast learner in the art of crime and he came to the attention of the established gangster Dutch Schultz.

In the violent poverty-stricken era of 1920s New York, Coll was not afraid to do whatever it took to rise to the top of the gangster tree. His aggressive and volatile personality made him a man to be feared and his willingness to murder to get what he wanted made him a trusted lieutenant of Schultz. He became one of the prohibition eras most feared enforcers.

As the body count rose, the authorities started to take a keen interest in Coll.

In 1927, at just 19, Vincent Coll was accused of the murder of a speakeasy owner who had refused to sell Schultz bootleg alcohol.

Coll was found not guilty and acquitted as Schultz used his influence with the jury.

Vincent showed no remorse, in fact, he now felt invincible.

Out of control, Coll became freelance and robbed the Sheffield Farms dairy in the Bronx without Schultz’s authorization.

When the 2 men next met, Schultz reminded Coll he could only operate with his permission. Coll told Schultz that he had helped build his empire and rather than apologize he demanded to be made his partner.

While Coll was a violent man, Shultz was on a different level of viciousness and not a man to be crossed. Vincent had made a major mistake, and a paranoid and ruthless enemy.

Read More: How the Irish Mob nearly wiped out the Italian Mafia in NYC

Coll had no friends in the underworld due to his lucrative side-line of kidnapping other gangsters and holding them for ransom. Whilst undoubtedly psychotic, Coll was no fool. He knew his victims would not report their kidnappings because of the underworld's code of silence. Also, any freed gangster would have a hard time explaining to the authorities where the ransom money they had paid had come from!

Coll was now a marked and isolated figure and the final break with Schultz came in January 1931. Vincent was arrested and Schultz put up the bail money. Coll failed to attend his trial and the money was forfeited. Coll refused to pay back Schultz and both went to war.

It was also in 1931 that Vincent obtained the nickname he is now best known by ‘Mad Dog’.

The attempt failed and in the ongoing gun battle on a public street, a five-year-old child Michael Vengalli, was killed and several other children wounded.

Because of this incident, the New York mayor at the time James "Jimmy" Walker called Coll a "Mad Dog" and the nickname made for great headlines and stuck to this very day.

Coll was arrested for the crime but was acquitted in a bizarre trial. Vincent’s lawyer was the famous defense attorney Samuel Leibowitz, much used by the gangster fraternity and for good reason. Leibowitz managed to destroy the credibility of the prosecution’s main witness, George Brecht, when it was revealed that he made a covert living as a witness at trials. Because of this, Coll walked free in December 1931.

He did not learn his lesson and even while awaiting trial he embarked on what would be his final fatal mistake, the attempted murder of Charles ‘Lucky’ Luciano one of the most powerful gangsters in America.

Vincent was hired by the New York ‘Godfather’ Salvatore Maranzano, who despite being the most powerful mobster in the city, feared Luciano would kill him and take over. It seems paranoia was not just restricted to Schultz.

Coll despite the risks readily agreed to murder Luciano for $50,000.

On September 10, 1931, Maranzano called Luciano to a meeting at his office. The plan was for Coll to arrive later and kill Luciano during the meeting.

Luciano who had a wide network of informers had learned of the plot against him and decided to act first. He sent his own men, who killed Maranzano before Coll turned up.

The fleeing assassins saw Coll arriving and informed Luciano he must be the intended hitman, this sealed Vincent’s fate.

Luciano arranged for Coll's old friend from the Gophers Owney Madden, now boss of the Irish criminal syndicate in Hell’s Kitchen, to place a $50,000 bounty on Coll’s head.

Acting on a tip-off, Scarnici and Fabrizzo burst into a Bronx apartment where they believed Coll was hiding. They found 6 people there. Not knowing Coll by sight they decided to shoot everyone. In the blood bath, 3 died and 3 hung to life, but Vincent was not among them. He was delayed elsewhere and arrived after the shooting. The authorities informed the mob that this bloodshed had to end.

Dutch Shultz and Madden decided to act. A few days later, Coll received word that Madden, whom he trusted from his Gopher days, wanted to speak with him. Coll was informed Madden had worked out a settlement between all the gangs that would make everyone happy.

A meeting was arranged in Hell's Kitchen where he would be safe because the neighborhood was under Madden's protection.

To ensure Coll could be recognized by his assassins, Dutch Schultz arranged for Abraham "Bo" Weinberg to go with Scarnici and Fabrizzo, as Weinberg and Coll had worked together under Schultz.

On February 8 as arranged, Coll entered the phone booth in the London Chemists drug store at 314 W23rd Street at Eighth Avenue and placed a call to Owney Madden to discuss the truce.

Weinberg identified Coll and Scarnici and Fabrizzo stepped out to murder Vincent.

Only one assassin, Scarnici entered the drug store, Fabrizzo and Weinberg waited on the sidewalk. Police reports later detailed that, as Scarnici passed cashier George Scott, who was waiting on a customer, a Dr. Leo Katz, he turned to Scott and quietly said, "Keep cool now."

Scarnici had a submachine gun hidden under his overcoat and as he approached the phone booth he drew this and fired two bursts into Coll as he talked to Madden.

Scarnici checked Coll was dead, then calmly replaced the gun under his coat and turned to walk out of the Drug Store. Passing the two witnesses Scott and Katz, he turned to them and raised a finger to his lips and made a Shhh motion.

He left the store and re-joined Weinberg and Fabrizzo and all three sped off into Eighth Avenue traffic. The hit on Vincent Coll had lasted less than 90 seconds.

The Coroner’s report revealed that while a total of 15 bullets were removed from Coll’s body at the morgue, it appeared that many more may have passed through him.

No one was ever arrested for Vincent Coll's death. Dutch Schultz and Owney Madden sent a wreath to Coll’s funeral, bearing a banner with the message, "From the boys." So ended the violent and notorious life of Vincent ‘Mad Dog’ Coll at the age of just 23 years.

Read More: How the nuns tamed the Gangs of New York