A heartbreaking letter written in Belfast is a rare part of Titanic history that was auctioned in 2012. 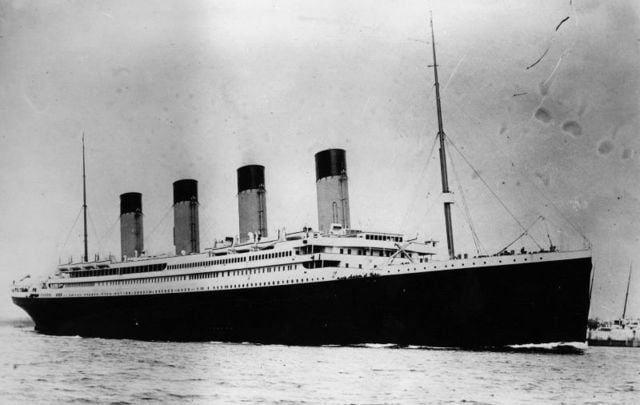 Titanic crewman Sidney Conrad Siebert penned a tragic final letter to his pregnant wife Winnie from a library in Belfast before heading for certain doom aboard the Titanic.

Siebert traveled to Belfast, where the Titanic was built, from Southampton, where he and his wife had moved sometime prior to 1909, to bring the ship on sea trials and to accompany her delivery to Southampton before she embarked on her maiden voyage on April 10, 1912. Siebert was part of a skeleton crew that was sent tasked with bringing the ship from its Belfast birthplace.

The caring husband and father explained in his letter how he brought paper to Belfast so that he could write a longer letter to his family while stationed there.

“I have bought a little note paper so that I could drop you a few more lines than I could get on a postcard. As I told you we had a very trying journey here we were over 11 hours in the train and then straight on to the steamboat for another 8 hours and nowhere to sleep all that time and she was a rather old boat we came over by. I hope you are still keeping well. I am glad to say I am alright the air here is very bracing it makes me as hungry as anything. I don’t think a great deal of the City it is not so good as Soton [Southampton] although there are several fine buildings here but the town itself is very dirty and it has been raining ever since we got here. I am writing this in the Public Library a very nice building but not up to date English books and papers seem very scarce here. Also another thing which strikes one as curious is that there are no cabs or Taxis here they all have these jaunting cars as sort of a shelf arrangement on two wheels and they look most decidedly uncomfortable. I have not tried one yet and have no intention of doing so."

“I expect we are leaving here for our trials on Monday and for home on Tuesday and I can tell you I shall be glad after that long time at home I don’t like being away at all. But I suppose I must not grumble as I have had a good time while I was home and must not get on & earn some money. Kiss baby for me tell her her daddy wants to see her and I want to see my other little girl as well. Good Night my own beloved with all the hearts love.”

The handwritten letter was among a collection of 35 Titanic and Maritime relics that was made available for online auction in 2012 by RR Auction in Boston.

There is a small separation to one of the central horizontal folds on one of the pages as well as some expected light soiling, and some scattered light toning to the second page. Apart from these small faults, the letter is in otherwise fine condition.

"It is of course, heart-wrenching that Siebert is obviously a devoted husband and father and uses terms of endearment in the letter to his wife, mentioning to give kisses to his daughter and unborn child,” said Bobby Livingston, Executive VP at RR Auction.

“Letters from Titanic's delivery/sea trial crew during their very brief stay in Belfast are practically non-existent,” added Livingston, “The fact that Siebert mentions the upcoming sea trials and delivery trip, and discusses the sites he had seen in Belfast makes this letter all the more desirable.”

The letter was auctioned off for an undisclosed amount, but bidding had begun at $500.

Siebert's letter is not only a crucial part of the Titanic’s history but also gives a fascinating insight into life in Belfast in the early 20th century.

Sidney Siebert was born in London, England 1882 and was married to Winifred Rose Savage, who was the sister of Titanic crewman Charles Savage. Their first child, Winifred Ena, survived only a few weeks and their second daughter, Lillian Elsie, was born in 1911.

Winnie, by then a widow, gave birth to their third daughter, Constance Winifred, later in 1912 following the death of her husband in the Titanic sinking.

In his book 'Titanic,' Colonel Archibald Gracie writes that he believes Siebert was pulled from the water by Lifeboat No.4 but lost his life thereafter. His body was not identified.