The shocking story behind an Irish Famine memorial in Quebec

Elaine Gannon and her community built a wonderful memorial to the survivors of the Great Irish Famine at the Martindale Pioneer Cemetery after their headstones were sadly bulldozed. 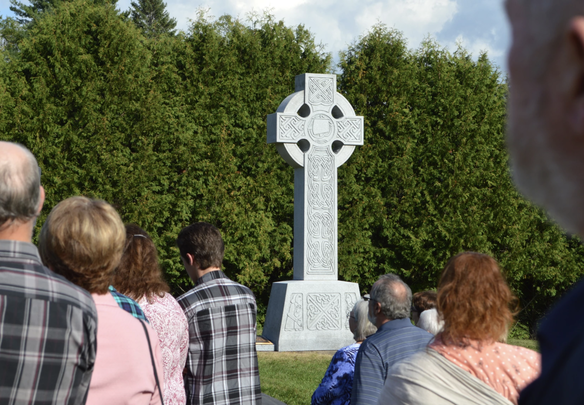 How a pregnant woman made a promise to her Irish Famine ancestors and followed through despite obstacles destruction caused to the sacred ground.

It is here, in Low, Quebec, where a unique memorial stands in testament to the survivors of Ireland’s Great Hunger who settled this area in the 1800s.

Situated in the old graveyard at St. Martin’s Catholic Parish, the site consists of a triple cenotaph listing the names of those buried there, along with a magnificent 12-foot Celtic cross.

Inscribed at the base of the Celtic cross in English, French and Irish are the following words: “May the light of heaven shine on the souls of the Gaels who left Ireland in the years of the Great Famine to find eternal rest in this soil. They will be remembered as long as love and music last.”

This remarkable cross was designed by Belfast artist Eithne O’Kane and it is the second-largest in Canada after Grosse-Île just outside Quebec City, which is now known as the Irish Memorial National Historic Site.

Over the years countless visitors have stopped by this site to look up their ancestors and reflect on the hardships and immense struggle of those early settlers.

Many have expressed deep gratitude for the memorial but often they wonder how it came about and what happened to the original headstones in the cemetery? For decades, the truth was shrouded in shame and misinformation.

There is a very compelling story behind this monument, and it dates back to the early 1960s when a young mother pregnant with her fourth child began to visit the graveyard.

The old cemetery was long abandoned and many of the headstones engraved with shamrocks and harps were overgrown and covered in brambles.

This was my mother – Elaine Gannon – a local woman with family connections dating back to those early Irish migrants. Her family hailed from County Mayo and settled in the area during the years of the Great Hunger.

During her visits, she became aware of the high number of infant and maternal mortality rates of those settlers in the late 1800s with many buried here.

Elaine had contracted Rubella, otherwise known as German measles, and she became terribly ill. Rubella is a contagious viral infection and while it may cause mild symptoms or even no symptoms in most people, it can cause serious problems for unborn babies whose mothers become infected during pregnancy.

In her desperation, she began to visit the old graveyard and commune with her ancestors. She made a pact: If she could survive this pregnancy and see her children grow to adulthood, she would commit herself to restoring this burial ground.

She already had three small children who needed their mother and she knew this child was not viable.

In those years, the Catholic Church held sway in Quebec and termination of a pregnancy regardless of the circumstances was impossible. In the end, she survived but her child did not.

It was Christmas night when her water broke. She put her children to sleep with medication and the doctor was called. She knew her chances of survival were tenuous. She was very depleted, but she had decided that if she was going to die, she would do so at home, on her own terms, in her own bed.

The events of that night are forever imprinted in her memory. She suffered terrible agony, and while the doctor kept promising that he would give her something for the pain, he never had any intention of doing so.

The child was stillborn. He was born in the early morning hours on St. Stephen’s Day 1961. They named him Conn Stephen. Conn of the Hundred Battles was an ancient High King of Ireland.

She was ill for several years afterward, but she continued to visit the old graveyard with the firm commitment that as soon as she could gather her strength, she would do her utmost to honor her ancestors.

She set about working to research the names of those buried in the old cemetery. Because the stones were old and overgrown, many of the engraved names had been lost in time.

Elaine began research to list the names and she started at the neighboring parish of Farrellton where the original records were kept. Here the priest welcomed herself and another local woman in to view the old records.

Then, they proceeded up to St. Martin’s where the parish priest took a completely different stance and obstructed any such effort. His view was that these women were unqualified, and it would require scholars to undertake any restoration work.

He did allow my mother access though, thanks to the intervention of the parish priest at Farrellton, for three days and three days only. By this time, the other woman unwilling to confront the Church decided not to pursue the matter.

My mother wrote longhand all the names and dates of the people buried in the graveyard. It was an arduous task with no typewriter or copier but she recorded everything she could find in relation to the old burial site.

When she discovered that three days were not enough time, she again approached the priest to plead for more time. She was given one more night to finish her work.

All night long she wrote out the names of those buried in the area that would become known as Martindale Pioneer Cemetery.

Just days later, she was horrified to receive an early morning telephone call telling her to go down to the old graveyard. A bulldozer was digging a large hole to push all the headstones into a trench.

Devastated she rushed to the church, but the priest refused to speak to her. With her children standing by her side, all she could do was stand and witness the complete destruction of the graveyard and weep.

The community was embarrassed. There was confusion and shame, and the prevailing response was to move on. Nobody wanted to clash with the power of the Church.

This was an era where to challenge the local priest was to risk exclusion from the rest of the community. So, the entire matter was hushed over and put to rest.

Her family asked her to let it go but she could not. As shocking as it all seems, Elaine became the custodian of the only listing of those buried on the site as all the official records disappeared from the parish.

For years, it was burning inside her until one fateful day she received a telephone call from an old farmer who was also outraged at what had taken place.

By this time, the site had become a cow pasture with history covered over and a distant memory for many locals.

Rebuilding and the Celtic Cross

Together with the help of Martin Brown and Eddie McLaughlin, the trio undertook to do something about the desecration. They raised the funds for a magnificent triple cenotaph memorial that lists the names and dates of death of all those buried there.

This was followed a decade later by that remarkable Celtic cross. In the center wheel of the cross, a ship represents the Famine ships that brought the early settlers to these green hills. At the bottom of the cross, a woman and child signify all those who died on the journey.

Little did Elaine know the drama that would engulf her own life in those years of work and planning. When the work was finally complete, one last blow would be the loss of another child.

Her beloved son Liam was killed in a car accident outside Banff, Alberta and he was brought home to be buried alongside his brother Conn Stephen in Martindale Cemetery.

Despite all the turmoil, there was tremendous satisfaction in finally seeing the project to completion.

As the last survivor of those responsible for putting the monument in place, Elaine wants to the truth to be told for future generations – particularly descendants of those who found peace and prosperity in this new land.

In 2016, two plaques were finally placed on the site outlining those who worked together to put right what was wronged so many ago.

There was enormous pride in the local community when the Irish Ambassador to Canada was present for that event. Jim Kelly spoke eloquently about the deep connection between Ireland and her Diaspora.

A new website was recently launched which gives the complete story, the background, and the joy of celebration to finally see the work complete.