WATCH: One of James Cagney's last films was about the Irish War of Independence

In "Shake Hands with the Devil," James Cagney stars as Sean Lenihan, an IRA leader during the Irish War of Independence. 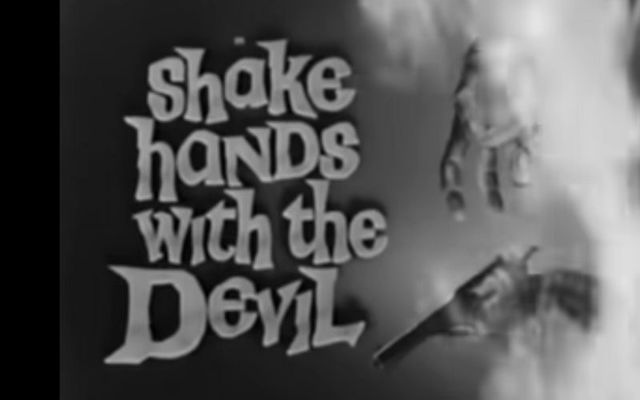 "Shake Hands with the Devil," filmed in Ireland, came out in 1959. YouTube

"Shake Hands with the Devil," a movie featuring iconic Irish American actor James Cagney that depicts the IRA's battle with the Black and Tans during the Irish War of Independence, is available to watch in full on YouTube.

"Shake Hands with the Devil," released in 1959, follows Irish American Kerry O'Shea (Don Murray), a student at Dublin's Royal College of Surgeons during the Irish War of Independence in 1921.

O'Shea and his friend Paddy Nolan (Ray McAnally) get caught in the middle of an IRA ambush, and Nolan is mortally wounded by British soldiers. He asks O'Shea to fetch their teacher Sean Lenihan (James Cagney), who turns out to be a high-ranking IRA leader.

Lenihan removes the bullet, but Nolan dies anyway. O'Shea survived the shootout unscathed, but he left his textbook, with his name inscribed, at the scene of the ambush and becomes a wanted man with a target on his back, forcing him to turn to the IRA for protection.

The remainder of the film takes place as the Irish War of Independence approaches a ceasefire. Complications arise when O'Shea falls for a beautiful English hostage and begins to ponder a peace treaty that does not satisfy Lenihan and his IRA counterparts.

"Shake Hands with the Devil" was filmed in part on the streets of Dublin, and became the fist American production filmed at Ardmore Studios in Bray, Co Wicklow.

The film is based on a 1933 novel of the same name by Reardan Connor, the son of a Royal Irish Constabulary officer who served during the War of Independence.

The Irish film was one of the last that James Cagney ever appeared in. As film critic Paul Tatara wrote in 2005: "By the time he [Cagney] starred in Michael Anderson's hard-hitting Irish Republican Army melodrama, 'Shake Hands with the Devil' (1959), he was already considering retirement.

"But he still seemed to enjoy himself during filming. When he wasn't basking in the beauty of the Irish countryside (this was his first visit to the land of his ancestors) he managed to deliver an extended, highly amusing performance for the gathered press."

Tatara added: "When Cagney showed up in Ireland to begin filming the picture, he was embarrassed that the locals made such a big deal out of his presence. As far as they were concerned, Cagney was one of their own...never mind that he grew up in the Yorkville section of Manhattan."

Tatara notes that Cagney's role in "Shake Hands with the Devil" is "one of the strongest roles" of the latter part of his career.

You can watch "Shake Hands with the Devil" here: