On This Day: The Ulster Covenant is signed in 1912

The signing of the Ulster Covenant is featured in British Pathé’s forbidden Irish film “Revolution in Colour," a full-length documentary which reveals never-before-seen color footage for the first time. 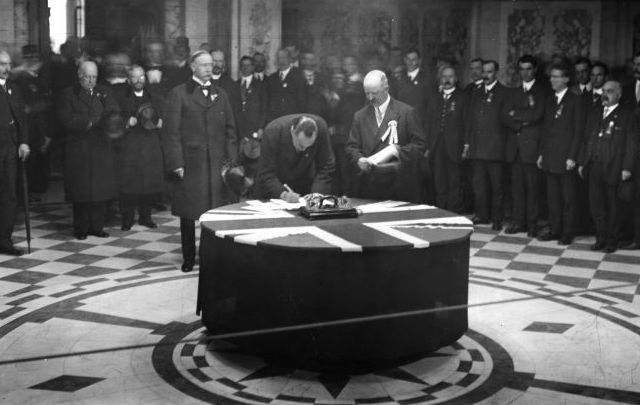 Leader of the Unionists and founder of the paramilitary Ulster Volunteers Edward Carson signing the Solemn Oath of the Covenant in Belfast, in protest against the Home Rule Bill, on September 28, 1912. Getty Images

Editor's Note: From September 28, 1912, Ulster's Solemn League and Covenant, known simply as The Ulster Covenant, was signed by close to half a million people who felt that Home Rule would be "disastrous" for Ulster.  The Public Records Office of Northern Ireland (PRONI) now maintains the Covenant's archives, which can be searched online.

The signing of the Ulster Covenant is but one of the major Irish historical events that are featured in the British Pathé’s forbidden Irish film “Revolution in Colour," which you can learn more about below:

The project, which The Sunday Times revealed had been quashed by the Irish government when it was first attempted, in 1935, (British Pathé’s film reels were even confiscated), is the result of a major collaboration between the archive and Zampano Productions, the acclaimed producers of Seven Women, TK Whitaker – Seirbhíseach an Stáit, and The People’s Tenor. It makes use of duplicates of the lost film reels which British Pathé had saved for posterity.

In telling this important story, at last, the producers have done something which the Irish government of 1935 could never have imagined. The BAFTA-nominated team behind “WW2 in HD Color” has painstakingly colorized the original footage so that the events of that tumultuous period can be seen, for the first time, as they were witnessed by those who lived through them – in full color.

“When you watch black and white, you are detached from the personalities and the history,” says director Martin Dwan.

“There is something about color that triggers empathy with people.”

“Revolution in Colour” goes far beyond the days of dodgy so-called-color re-releases of classic films.

The General Manager of British Pathé, Alastair White, explains: “Although still somewhat controversial, we at British Pathé believe colorization to be a terrific tool that, when applied appropriately, can help transport the viewer back into the past to better appreciate historical events as they were experienced by those involved. Colorization breaks down the barriers of time and creates a greater sense of immediacy.”

Alastair continues, “This is not about reinventing a masterpiece without the original creator’s permission. This is about recreating reality.”

Viewers can see such personalities as Eamon de Valera, Michael Collins, and Lloyd George; such critical events as the signing of the Ulster Covenant and the funeral of revered IRB leader O’Donovan Rossa; and such dramatic scenes as the destruction of Limerick. Guerrilla warfare in the countryside, the fighting in the streets and British reprisals are all featured in the fascinating original footage, along with rarely-seen footage of pre-independence Ireland – all in full color.

And it is fitting that the documentary was completed in 2016, the centenary year of the Irish Easter Rising that is so central to the saga of the revolutionary period.

“Revolution in Colour” is the flagship program of the new online on-demand channel, British Pathé TV.

The 90-minute film is written by respected Trinity College Dublin historian Eunan O’Halpin and is narrated by Allen Leech, known for his work as Tom Branson in the hit TV series “Downton Abbey” and as the Soviet double-agent John Cairncross in the Oscar-winning “The Imitation Game."

You can learn more about British Pathé's 'Revolution in Colour' on its website, or watch the full documentary here:

British Pathé is one of the oldest media companies in the world. It recorded every aspect of global culture and news for the cinema. With their unique combination of information and entertainment, British Pathé documentaries, newsreels, serials, and films changed the way the world saw itself forever. Decades after newsreels have left our screens, the company continues as a pioneer of filmed entertainment, launching British Pathé TV. This new online on-demand channel offers an extensive range of full-length documentaries, interviews, and classic movies.

Have you watched 'Revolution in Colour'? Let us know your thoughts about it in the comments!