Step back in time and peruse original news footage from the 1916 Easter Rising. 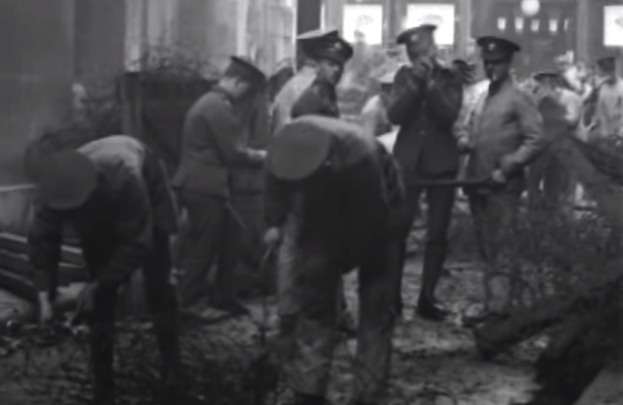 Still from the British Pathe footage of the 1916 Rising. Company releases 85,000 hours of historic footage from across the world. British Pathe, YouTube

In 2016, archival footage of the 1916 Easter Rising was published online ahead of the commemoration of the Rebellion's centenary.

Ireland's 1916 Easter Rising was commemorated by the British Pathé organization when it published archive footage of the events and its aftermath online.

At the time of the Rising, Pathé’s silent newsreels were the only source of news as we now know it. Cameras captured the Easter Rising and the events surrounding it.

The footage in Ireland shows British soldiers receiving tea and food from women on the street as well as the heavy damage on the General Post Office on O’Connell Street and Liberty Hall.

Other footage shows the damage to the center of Dublin caused by the fighting during Easter Week.

The War of Independence and the signing of the Anglo-Irish Treaty on December 7, 1921, also feature in the newly online footage.

The company’s newsreels stretch from 1896 to 1976 and the Irish Times report says it has, arguably, the finest collection of Irish filmed news events before the advent of television.

Included in their thousands of hours of footage is coverage of the First and Second World Wars, as well as exclusive footage of the Titanic, the Hindenburg disaster, and the Wright Brothers' flight.

The company received a grant from the British government in 2010 that allowed Pathé to digitize its entire archive.

British Pathé general manager Alastair White told the Irish Times that they have a priceless treasure on their hands: “What we have is a treasure trove unrivaled in historical and cultural significance that should never be forgotten."

The British Pathé archival footage can be found on their YouTube page.