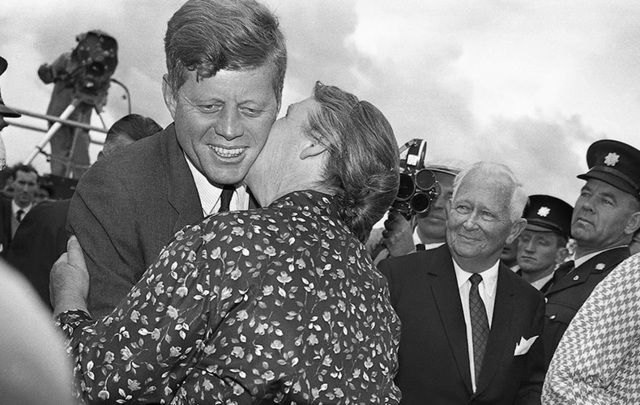 On June 27, 1963, John F Kennedy became the first President of the United States to visit Ireland during his term in office. This historic event was recorded for posterity by British Pathé, a UK producer of newsreels and documentaries in the 20th century.

The black and white footage shows the moment JFK touched down on Irish soil at Dublin Airport, where he was greeted by Taoiseach (Irish Prime Minister) Éamon de Valera.

Thousands converged on O’Connell Street in Dublin to see Kennedy as he traveled in a motorcade through the city.

During the visit to Ireland Kennedy stopped at his ancestral home in Dunganstown, County Wexford, where his great-grandfather Patrick Kennedy had lived before emigrating to the United States.

The president was greeted there by a crowd waving both American and Irish flags and was reportedly serenaded by a boy choir singing “The Boys of Wexford.” He also enjoyed a cup of tea and cake with members of his extended Irish family at the Kennedy homestead.

The British Pathé footage shows Kennedy leaving Wexford by helicopter for his return to Dublin, where he attended a garden party in the rain at Áras an Uachtaráin.

John F. Kennedy would later call his time in Ireland as “the best four days of my life.”

He was assassinated only a few months later in Dallas, on November 22, 1963.