Repair work begins to save the USS The Sullivans

The USS The Sullivans took on roughly 20,000 gallons of water over the winter and requires emergency repair work to prevent it from sinking. 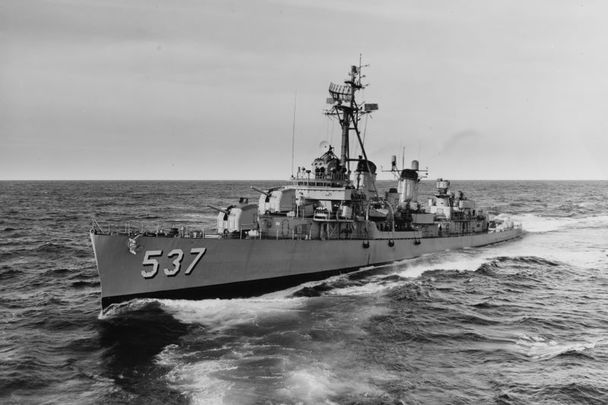 Repair work is underway to save the USS The Sullivans - a US Navy destroyer named after five Irish-American brothers who perished when the USS Juneau was sunk by the Japanese during the Second World War.

The Buffalo and Erie County Military & Naval Park recently discovered that the 78-year-old decommissioned vessel was taking on water and listing at its dock in Buffalo's inner harbor and launched a fundraising campaign to raise money for emergency repairs.

On March 2, the naval park announced that it had exceeded its fundraising goal for emergency hull repairs and the park has begun plugging the holes and pumping out between 15,000 and 20,000 gallons of water.

Paul Marzello Sr., president and chief executive of the park, said that the USS The Sullivans had already survived far longer than most Navy destroyers.

"She was built to last about 20 years. Destroyers by their very nature, are built with a very thin layer of steel because they’ve got to be fast and maneuverable," Marzello Sr. told Navy Times. "Seventy-eight years is a long time to keep these ships in condition to be floating, especially when we want to use them as a museum piece and use them as an educational tool."

Marzello Sr. said that the holes in the vessel's hull range in size from a dime to a quarter but said that size doesn't make much difference once the holes are beneath the waterline.

"It’s just coming in full bore, so those are the scary ones."

The naval park's initial fundraising drive raised more than $230,000 to fund emergency repairs, far exceeding the fundraising goal of $100,000. However, officials at the park estimate that it will cost more than $1 million to permanently repair the ship's hull, which has been damaged by the freeze and thaw of decades of winters.

Crews at the naval park additionally struggled to board the vessel due to severe damage to the gangways during the winter storm.

Meanwhile, the granddaughter of Albert Sullivan - the youngest of the five brothers and the only one to have children - launched a massive fundraising campaign on St. Patrick's Day to help raise the $1 million required to secure the vessel's long-term future.

Kelly Sullivan told Navy Times that she has fond memories of going to see the USS the Sullivans and said that the ship honors the five brothers and all men and women who gave their life for the United States.

"It’s an artifact that celebrates not just Sullivans, but it honors all of the men and women who have served our country," Kelly Sullivan said.

The USS The Sullivan saw action during the Second World War, the Korean War, and the Cold War and it is now a national landmark. The ship was christened by Alleta Sullivan - the mother of the five Sullivan brothers.

It is one of four decommissioned Navy destroyers at the Buffalo and Erie County Military & Naval Park.