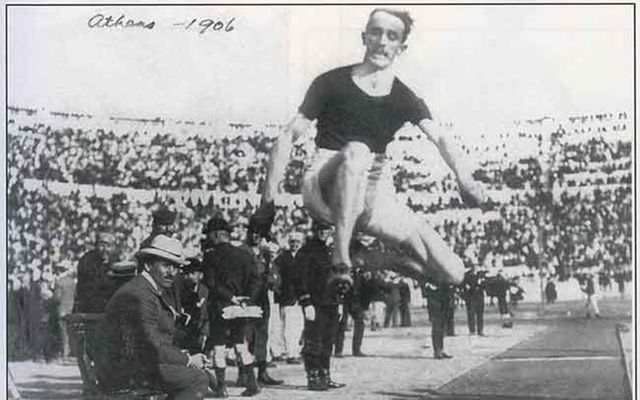 A decade before the 1916 Easter Rising Peter O'Connor showed real Irish pride and daring at the 1906 Greece Olympics.

In 1906, Peter O’Connor,  Con Leahy and John Daly were put forward for the Olympics [the 1906 Games were official at the time, but are no longer recognized by the IOC] by the GAA and the Irish Amateur Athletic Association (IAAA). The three Irishmen traveled to Greece in green blazers and shamrock-emblazoned caps, and they had with them their Irish flag, the old 'Erin Go Bragh' flag with a golden harp showing on a green background.

When they arrived, however, a technicality in the rules meant that they were not able to complete as Irish, Ireland not having its own Olympic Council to nominate them to compete. Worst of all, the Olympians were now to be classed as British, a nationality that none of them was too happy to be representing.

Although born in England, O'Connor was raised in Wicklow. He joined the GAA two years after its inception and won many All-Ireland titles. He was the first person ever to set a long jump world record with the International Association of Athletics Federations on August 5, 1901. His record remained unbroken for 20 years and remained an Irish record for an outstanding 89 years.

A version of the Erin go Bragh flag O'Connor would raise at the Olympics. Image: WikiCommons.

What is your favorite act of defiance from an Irish person? Let us know about it in the comments section below.