Have you heard of the Tailteann Games? The ancient Irish event is believed by some to be even older than the Olympics. 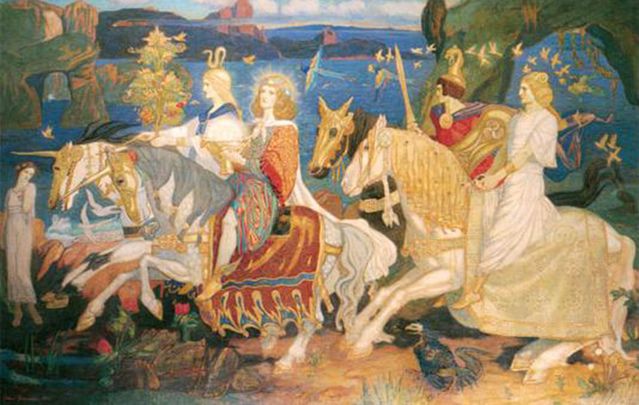 The Tuatha Dé Danann of which Lugh was a member. Public Domain / WikiCommons

A tribute to the goddess Tailtiu, the games were instituted by Lú (Lugh, member of the Tuatha Dé Danann), who wished to honor the death of his foster mother with a celebration of Irish culture and strength.

The Olympic Games are heralded as one of the oldest sporting events in history, dating back to ancient Greece. But were the Greek Olympics actually influenced by the existence of a very similar tournament in Ireland, created centuries before?

The Tailteann Games are sometimes known as the Lughnasa games as they reach their pinnacle on August 1, the festival of Lughnasa in Ireland. (August in Irish is now “Lúnasa” a more modern spelling of the word.)

A tribute to the goddess Tailtiu, the games were instituted by Lú (Lugh, member of the Tuatha Dé Danann), who wished to honor the death of his foster mother with a celebration of Irish culture and strength, holding the first mourning ceremony with her funeral. Lugh was an Irish God, often known as the Long-Armed Master of the Arts, and people often mistake the celebration of the games as a tribute to him instead of to Tailtiu.

The Goddess Tailtiu was the wife of Eochaid mac Eirc, last of the Fir Bolg High Kings, and the beloved foster mother of Lugh and she was linked with fertility and harvesting. Some say she died while clearing pastures for agriculture and, so, Lugh organized the harvest festival in her honor, at the time of the year traditionally known for bringing in the harvest.

After Tailtiu was buried under a mound in Co. Meath, the area became known as Telltown, which is thought to have been somewhere between today's Co Meath towns of Kells and Navan. It was here the Games took place for hundreds of years, occurring at least once every three years.

Running through the July fortnight running up to August 1, the Games may have been the biggest draw for the crowds but they also had two other important functions: honoring the dead and the implementation of new laws.

The first three days were spent burning the dead on funeral pyres, while the druids called out their incantations. Once all the corpses were turned to ash, the druids were then joined by the bards, and the word was spread of the new laws envisioned by the Ollamh Éireann (the Professors of Ireland). The crowds then received their reward through the entertainment of the physical and mental challenges of the games.

Long jump, high jump, running, hurling, spear throwing, boxing, contests in sword fighting, archery, wrestling, swimming, and chariot and horse racing were all favorites, while the strategists met their competitors in games testing their skills. Other competitions involved singing, dancing and storytelling, while craftsmen faced off against each other to win the title of best in Ireland.

Not only were the Games a place for sport, but the massive fair that grew around the commemoration became a place for arranged marriages and a place to find work for the winter.

The Games were extremely popular between the 6th and 9th century AD, but the games declined after the Norman invasion of Ireland in 1169.

As Ireland slowly strode towards independence following the implementation of the Anglo-Irish Treaty in 1921, the Free-State government felt the resurgence of the Tailteann Games could be a perfect means by which the Irish people could again express their identity, history and culture, and an attempt was made to revive them.

Organized by the GAA in Croke Park, Dublin, in 1924, 1928, and 1932, the Games were open to anyone with connections to Ireland, not just Irish people, in the hope that they would one day rival the Olympics. With the violence of the Civil War and the tension between Ireland’s new and emerging political parties, however, the revival attempts soon fell by the wayside. Although some athletic competitions in recent years have taken on the name Tailteann, none rivals the original spectacle.

The remarkable 20th-century games and their athletic heroes were recorded by British Pathé, which created newsreels of world events to be shown before movies. Pathé now boasts one of the largest collections in the world.

In the first video, we see the traditional Irish game of camogie looking very different from its current manifestation. As this team trains for the Games, we see them sporting dresses most modern-day athletes would argue restrict their movement.

The next two videos show a collection of some of the other incredible events in 1924, from the high jump to the steeplechase. The video is rounded off with a pyrotechnic tribute to Tailtiu herself.

Do you think we should revive the Tailteann Games in Ireland? Let us know your thoughts in the comments section, below.