Double victory at the 1906 Olympics in Athens was a triumph that heralded rebirth of the motherland. 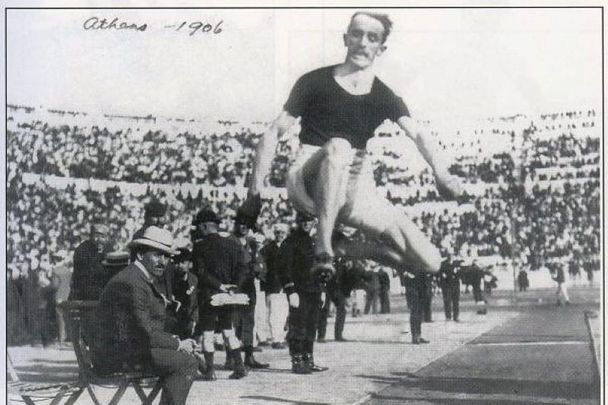 Peter O'Connor's double victory at the 1906 Olympics in Athens was a triumph that heralded rebirth of the motherland. National Archives

In 1906, three Irish athletes went to compete at Athens, but as an independent team for Ireland. Like the two solemn black athletes who raised cumhacht fists in Mexico City, Peter O'Connor defied authorities at the Olympic Games by winning and pulling a wonderful stunt for the motherland.

It was ten years before the Easter Rising. Renaissance was everywhere, and the Olympics was being resuscitated with stops and starts.

Their uniforms were green. They flew the harp banner of Erin Go Bragh as their flag. These Irish athletes were determined to compete as representatives of their own country, though the British committee insisted otherwise.

Peter O'Connor won two Olympic medals: silver and gold. The American who got gold, won on a technicality, ruled absurdly by the American coach. O'Connor returned the next day to win gold.

The time came to step upon the champion's stage.

As he was about to receive his medals, O'Connor darted for the flag pole instead. He climbed it like a panther. At the top, he unfurled the old flag of Erin—a golden harp on green field with the Gaelic promise "Ireland Forever."

Irish and Irish American athletes surrounded him. They kept security at bay so Ireland could claim her gold and silver.

The British objected in every way possible. Some exclude these Olympic medals of 1906, and call them inter-game medals in order to keep the four year cycle intact, even though the 1900 Paris Games and those in St Louis 1904 were a sideshow mess.

It was at these 1906 games that the opening ceremony, the Olympic Village, the flag hoisting for victors and other such traditions began. The Olympics began in 1896 and didn't get going again until 1906. Despite official need to call Paris and St Louis Olympiads, they were not in any sense we hold today.

Peter O'Connor won silver and gold for Ireland at the successful 1906 Games.

As Flann O'Brien wrote in “At Swim-Two-Birds”:

"... [the] Irish race was always noted for, one place where the world had to give us best. With all his faults and by God he has plenty, the Irishman can jump. By God he can jump. That’s one thing the Irish race is honored for no matter where it goes or where you find it—jumping … Go to Russia...go to China, go to France. Everywhere and all the time it is hats off and a gra-ma-cree to the Jumping Irishman."

O'Connor's Olympic gold and his stunt up the flag pole should be remembered for what it was—an Olympian triumph that heralded rebirth.