Patrick MacMahon, the Irishman who became president of France

Patrick MacMahon, whose Irish ancestors emigrated to France following the Treaty of Limerick, became President of France in 1873. 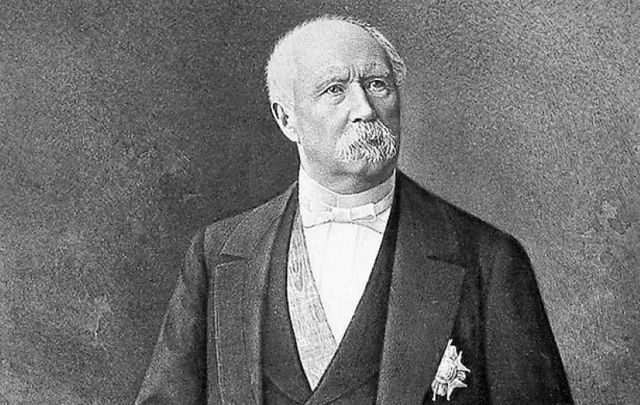 Patrick MacMahon, the Irish man who became President of France in 1873. Public Domain

Avenue Mac-Mahon, radiating out from the Arc de Triomphe, is named for Patrick Mac-Mahon, President of the French Republic from 1875 to 1879 - one of France’s greatest soldiers, member of a Franco-Irish family, ancient lords of Munster.  The MacMahons were Wild Geese who had resettled in Burgundy.

Patrick, born in June of 1808 at the Chateau de Sully, attends the French military school at St. Cyr. He becomes a military officer and, in 1830, is among those who invade Algeria and capture the city of Algiers.

Handsome Lieutenant Mac-Mahon makes himself remarked by his drive and bravery.  He receives the cross of the Knights of the Legion of Honor.

Monsieur Fulbert Dumonteilh tells us Mac-Mahon has a soldier’s body of steel: “His face is sweet and calm like an Irish landscape…(Then) You see him gallop past, his sword riveted to his hand; his eye shines…His orders issue forth like bullets…”

In the summer of 1831, joining the English to repel a Dutch invasion of Belgium, our busy Franco-Irishman is awarded the Cross of the Order of Leopold.

A great expedition is launched against Constantine, the capital of eastern Algeria, where Ahmed Bey ben Mohamed Chérif leads a fierce opposition against the invading French. Mac-Mahon inspires his Algerian-French troops, receiving a wound in the stomach from a shell.

The next day he leads the assault and is first to appear on the ramparts as the French take the city.

Read More: No way out - Irish trapped in France during WWII

Mac-Mahon in December 1842 is promoted to Lieutenant-colonel in the newly-formed Foreign Legion.

By 1850 he and his troopers have carried the French colors to the frontiers of Morocco.

In 1852, after twenty-seven years of service, twenty-three of them in a hot Algeria of incessant battles, Mac-Mahon is promoted to general.

He is recalled from Africa in 1855 to assist the French and English battle Russia in the Crimean War.

For so long Russia has sought sovereignty over the Black Sea and the Bosphorus.  England, joining with France, must take Sebastapol, the main Russian naval base in the Crimea.

Mac-Mahon is called upon to lead the French attack against a hilltop at Malakoff. The allies launch a three-pronged assault; MacMahon’s succeeds.  Standing atop the conquered hill he exposes himself to powerful Russian counterattacks. Urged to withdraw, MacMahon famously responds, “J’y suis, j’y rest,” “Here I am; here I will stay.”  He does stay, fortunately discovering in time and having his men sever wires leading to huge caches of gunpowder with which the Russians intend to blow up the hill.

Sebastopol is taken, and the Crimean War is over.

Mac-Mahon is made a French senator.

He returns to Algeria and completes its conquest.

Next, 1859, MacMahon accompanies Napoleon III to battle the Austrian Empire, which is threatening to invade Sardinia.  At the Battle of Magenta, near Milan, Napoleon III is outnumbered but Mac-Mahon, with his Algerian troops, arrives and hits the Austrian flank, forcing them to withdraw.

The French win another war.  Napoleon III makes General Patrick MacMahon Marshall of France and Duke of Magenta (a title still held by his family today).

The French feel themselves the undisputed dominators of Europe, but Otto von Bismarck builds up the Prussian military, including its artillery (The French still largely depending on cavalry) and develops the railway systems of the German states.

In the Franco-Prussian War that comes in 1870, MacMahon is given constantly conflicting orders by Napoleon III and is defeated, himself seriously wounded by an exploding German shell at the battle of Sedan.

His wife, Elizabeth, Duchess of Magenta, flies to his side.  Like Cuchulain, he recuperates quickly.

Prussia, having captured Napoleon III, overruns France and besieges Paris.  The French agree to give up Alsace and Lorraine and to pay a huge indemnity. German troops will pull out of France as the money is paid.

Read More: How four Irishmen found the largest pot of silver ever known in Nevada

The Parisians Commune rebels against these terms and against a French government set up at Versailles. MacMahon puts down the Commune.

The country remains in chaos between those leaning towards royalty and others wanting a republic. Various leaders emerge, all unsuccessful.

The French call upon Patrick MacMahon to accept the leadership.  He has almost everyone’s trust, with the complete loyalty of the army.

Under his hand, France settles down, reorganizes, pays off the Prussian indemnity two years ahead of schedule and resumes a leading role in the world.

Patrick retires in 1879 to his family’s Chateau de Sully. The MacMahons of today have turned the property into a leading French winery.