Willie Clancy, piper and folklorist, dies on this day in 1973

Remembering the iconic Willie Clancy, one of Ireland's most respected musicians. 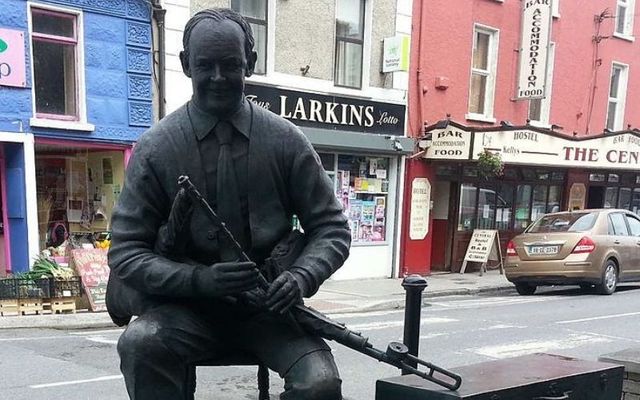 On January 24, 1973, famed piper and folklorist Willie Clancy passed away, leaving a gaping hole in the world of Irish traditional music.

Born in Co. Clare in 1918, Willie Clancy first picked up a tin whistle aged five, later moving onto the traditional flute and to the uilleann pipes, the instrument on which he was to make his name. Working as a carpenter and even emigrating to London for a time when unable to make a living as a musician, he would later return to Clare where he made some influential recordings.

On this the anniversary of his death, we remember the everlasting legacy of Clancy and how he still influences young traditional musicians to this day.

When the piper and singer Willie Clancy died on January 24 in 1973 at the age of 55, the traditional music community in Clare and beyond lost one of its most respected musicians, a man who carried the heart and soul of the music where ever he went.

Residents in Miltown Malbay, Clancy's hometown, felt a need to carry on the musician's commitment to the music and so established a summer school devoted to the uilleann pipes and other instruments integral to the playing of traditional Irish music. Set to celebrate its 45th year this summer, Scoil Samhraidh Willie Clancy (the Willie Clancy Summer School, otherwise known simply as Willie Week) continues to ensure that the devotion in Clare lives on in Clancy's name.

Considered the granddaddy of all such destination music programs, where students can match their devotion to their artistic bent towards traditional Irish music with the merrymaking that goes with it, the founding fathers acted with one motivational principle that has guided it since.

Their initial focus was recognizing those special people in the folk idiom who are "tradition bearers." It wasn't just their musical talents for performing, but rather how they lived their lives and integrated their music into their way of life and passed it on to others. That was the compliment being paid to a man like Willie Clancy in establishing the summer school in his memory.

That notion came back to me several years ago when I reflected on the passing of the East Clare fiddle legend Paddy Canny, who was laid to rest in his native Tulla with the expected large crowd of musicians who respected his unique contributions to the music.

Canny's death came just months after the passing of two other Clare octogenarian musicians: Concertina player Kitty Hayes, also from the Miltown area, and fiddle player Joe Ryan from Inagh in March. They may have had ordinary lives as carpenters and farmers, but there is no denying that they imparted far more than just beautiful music when their instruments were in their hands.

Christy Moore, who has his own fondness for the Banner County, may have been singing about another festival (Lisdoonvarna) when he proclaimed, "If it's music you want, then head to Clare," but he has helped build the reputation of the county as the traditional center in Ireland down through the years.

Heroic icons like Clancy, Ryan, Hayes, and Canny brought out the best in the music and inspired not only their contemporaries who grew up in the era of the house dances and the cuairts (nightly visits), but the generations coming after them, who may have been drawn to Miltown Malbay for Willie Week or Clare in general for any of the multitudinous festivals all year long.

It is the transmission of that kind of ethos or way of life that helps define their music in a special way that couldn't be conveyed by a slick marketing or public relations campaign surrounding their music. You hear it and you feel it at the same time.

And for people of that generation whose primary association with the music was playing for house dances or gambles or American wakes, the connection with dancing was seamless and very important.

None wanted to be a musician whose music would "stick people to the floor," as my mother was inclined to describe musicians playing for the sets. Certainly, it was the best compliment, and when the late Joe O'Donovan (a Corkman) arrived in Clare to initiate the set dancing revival back in 1982, that was an ever-present goal to be achieved where the dancers learned more about the music that would propel them around the house.

It took a few years for the concept of the music and dance as one to infiltrate into the modern mindset and prism for which to appreciate and listen to or dance to great music at varying tempos but it was all part of the evolutionary challenge. But it would never be broached if it wasn't for the tradition bearers like O'Donovan as well.

It would be easy to be saddened by the losses of Ryan, Hayes and Canny and so many of the senior musicians who took their music down into the ground with them, but they have left a rich legacy above ground for which we can be very grateful. Their long lives made for a very historic bridge between the generations.

It is even more important that younger musicians respect and carry on that tradition in an age when there are so many other choices available to them. Looking around County Clare these days, there is neither a dearth of teachers or students (and happily throughout Ireland).

That they are doing so using all that technology can bring to their efforts is the contribution that this generation brings to keeping the tradition alive, so we must appreciate that aspect bringing the music into the future.

We have also seen a great interest in the academic community in Ireland focusing on the tradition bearers who kept it in a healthy state for greater scrutiny now, and that will help establish validity for generations to come.

Ireland's economic fortunes brought not only benefits for the business sector but for the traditional arts through massive funding schemes that have helped archive and local resource centers and budding tradition bearers themselves who embrace the Living Tradition. So while there is sadness at the passing of such stalwarts, their lives encouraged us to keep that flame alive. And so we shall.

Have you ever been to Willie Clancy Week in Miltown Malbay? Let us know in the comments!