How to choose which Irish instrument to learn how to play

From the guitar to the bodhrán, here are the pros and cons of learning how to play different Irish instruments! 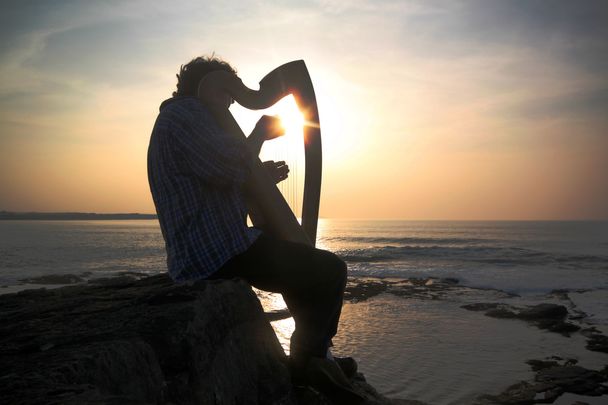 These are just some of your options if you want to pursue learning an Irish musical instrument! Getty

There's a fascinating array of Irish instruments you can choose to learn how to play.

Picking your instrument is the most fundamental part of the entire process of learning how to play Irish music. If you don’t enjoy your instrument, you won’t practice, you won’t seek out opportunities to play, and you’ll abandon the hobby sooner or later.

Let’s take a look at some of the options, from the most common to the least: 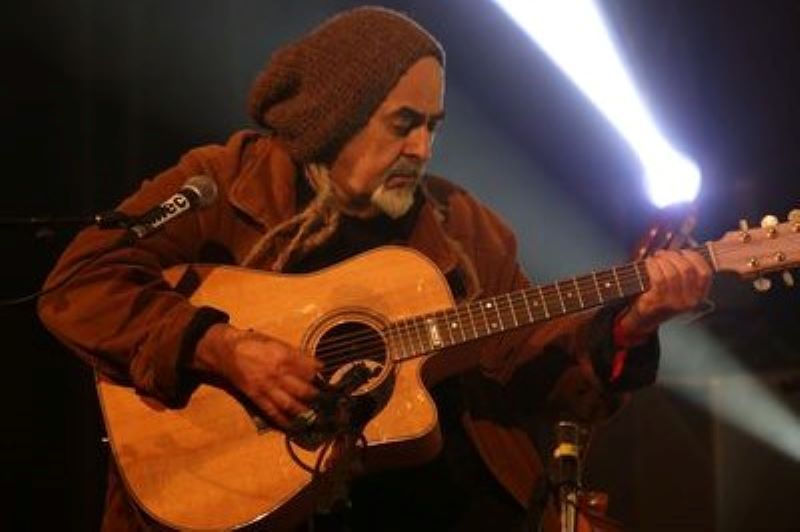 Pros: Widely available and there’s a good chance you already have one, or a relative will. Basic tuition can be found almost anywhere, and the role in a trad group is mainly rhythm-based: perfect for those who don’t seek the spotlight. And it’s a versatile skill for many other genres of music.

Cons: The same things that some might consider good about the guitar might be problems for other musicians. While you can play melodies on the guitar (as any rock solo can show), it’s just not the way it’s used in trad. Guitarists will find themselves confined to a backing role. 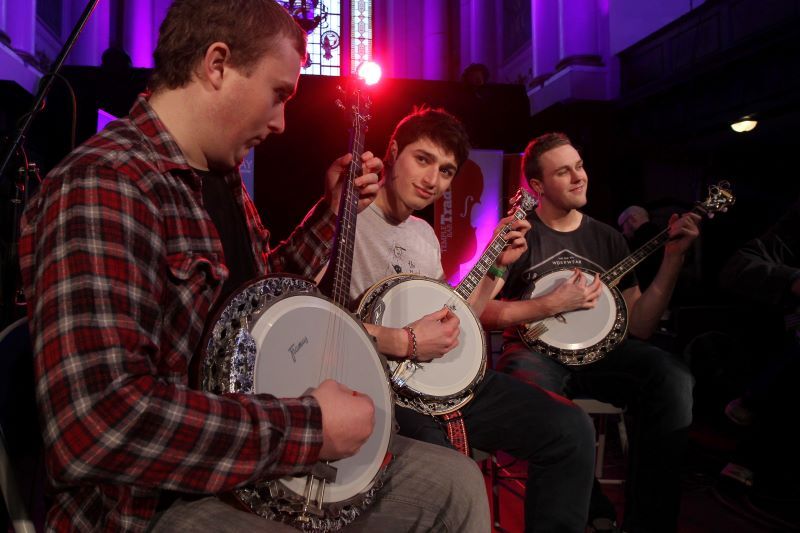 DIT Banjo Heads at the Temple Bar Tradfest in 2013 (RollingNews.ie)

Pros: The banjo is pretty easy to find, being a staple in most forms of folk music. It plays the main notes of the tune, so it’s perfect for playing alone as well as with others. The mandolin is tuned and structured the same way as the banjo, so the same skills can be used for both.

Cons: As a melody-based instrument, you’ll be playing the main notes of a tune – what you’d hum to yourself – and speed will be essential when playing with others. The mandolin, while smaller and brighter-sounding (due to its pair of strings for every single string on the banjo) is also quieter. 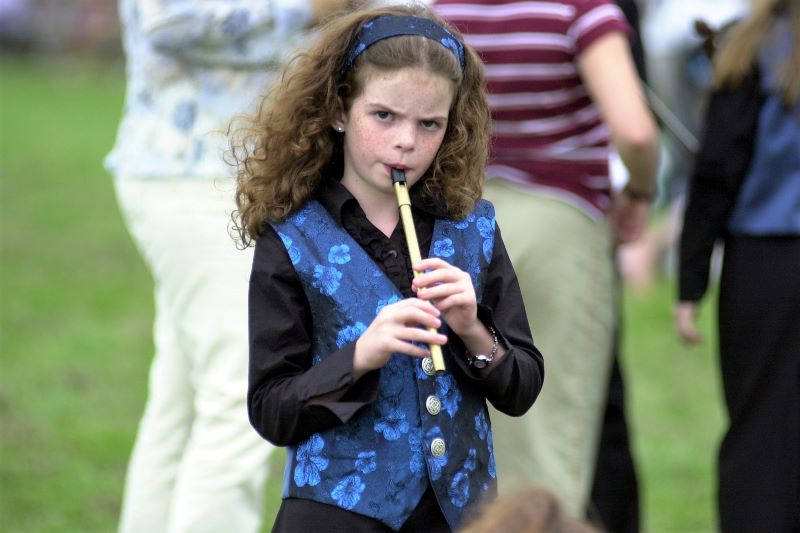 A tin whistle player at the 2003 Fleadh Cheoil in Ireland (RollingNews.ie)

Pros: Cheap as can be, this was once called the pennywhistle, and today will still cost very little. Only the very, very, best whistle makers in the world charge a few hundred dollars. The instrument is simple in form – six holes on a basic flute shape – and different notes are formed through covering different combinations of the holes. Whistles come in various keys, too, though D is the most common.

Cons: While covering the holes will get your note, don’t be fooled by the instrument’s simplicity – whistle players need to play fast. And that means rapidly changing combinations with perfect accuracy at high speed. In some ways, that’s true of every instrument, but when you see a good player’s fingers do the rapid dance needed, you’re seeing the result of long hours of practice. 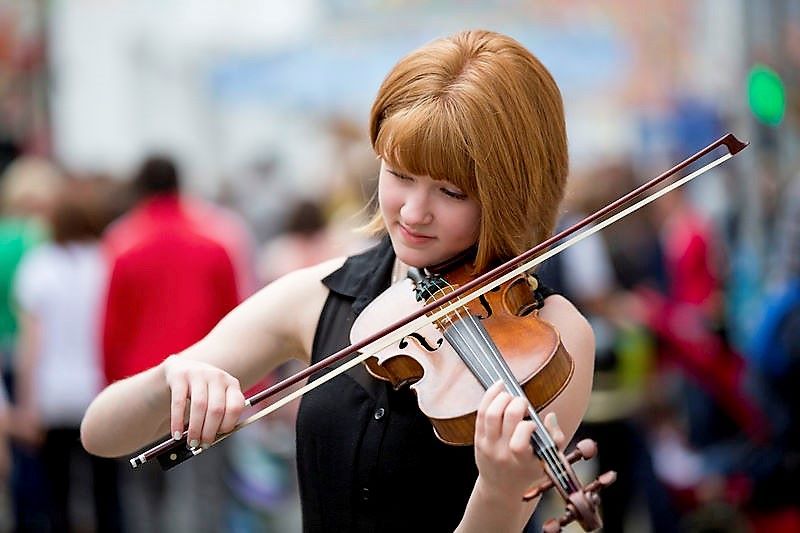 Pros: Easy to acquire, the fiddle is the same instrument as the violin. The difference is in an entirely different style. Fiddle playing is rapid and extremely expressive, with plenty of room for your own interpretation. A good fiddler with the ability to pick tunes up by ear is highly prized.

Cons: Fiddle playing is notoriously difficult to learn. The instrument has no frets – those little markers on a guitar that mark the notes and make it impossible to play the sounds in between notes (meaning it's easier to stay in tune). Novice fiddlers are quite likely to sound like a bag of cats to start with but the rewards are there for those with the passion and a fiddle adds a huge boost to any session. 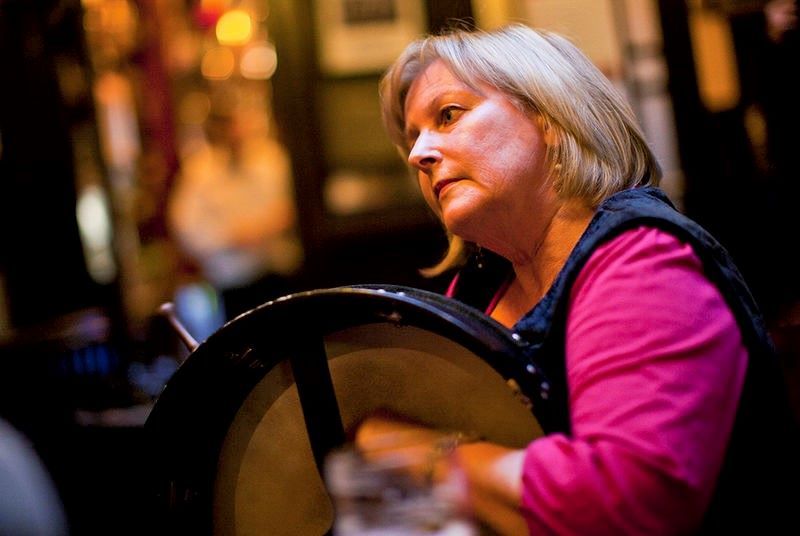 
Pros: The traditional Irish drum is one of the only dedicated rhythm instruments, and is recognizably Irish. It certainly looks the part anyway. It’s distinctive and bodhráns feature at Irish sporting events, especially when you need to energize the crowd!

Cons: Outside of Ireland, they can be difficult to find, and it's not an "essential" part of a session. 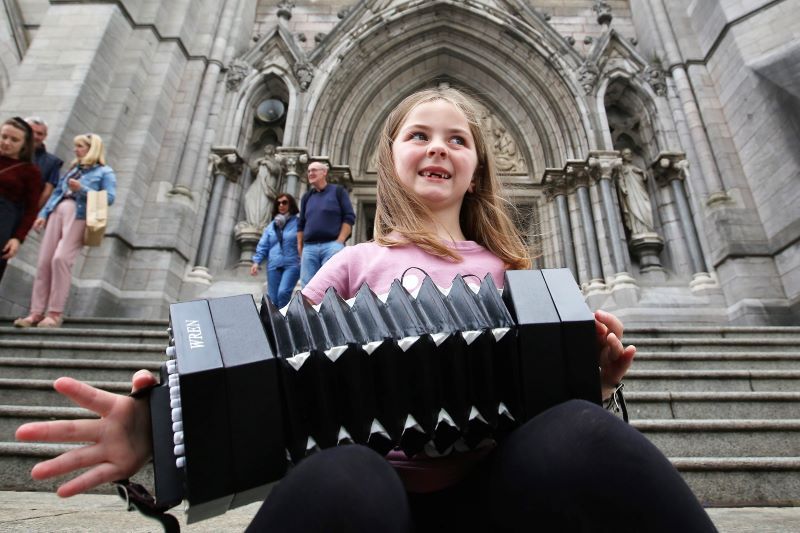 A concertina player at the Fleadh Cheoil in Ireland (RollingNews.ie)


Pros: Not as expensive to begin with as some traditional instruments, it's likely to cost a few hundred for a starter model. It’s a very versatile melodic instrument and is usually played with single clear notes rather than the chorus many people think of when they think of the accordion.

Cons: Concertinas are popular all over Europe, so if you’re looking to play Irish music, you’ll probably want to track down an Anglo-Concertina in the keys of C/G. For such a small box, it can be quite complicated to buy, so you’ll want to do plenty of reading online at concertina.info’s great FAQ, or ask questions online. 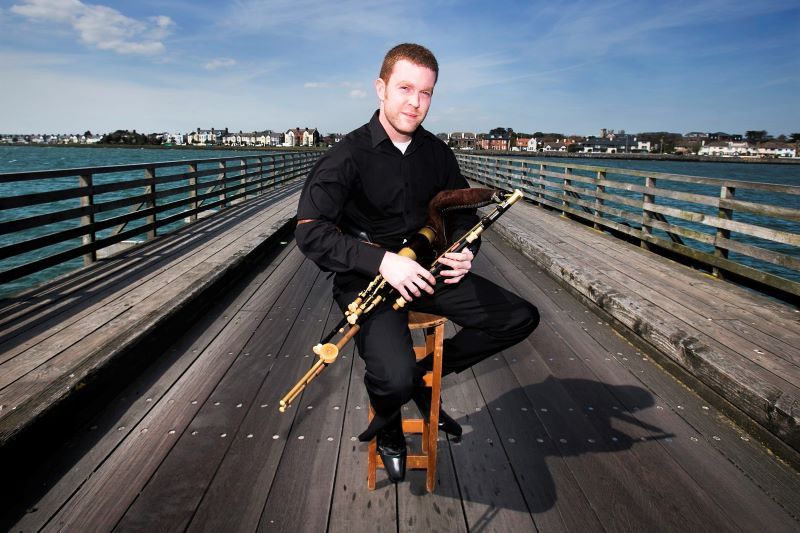 Pros: A good uileann piper is rare and is usually a musician to be taken seriously. The instrument has a very distinctive sound and there’s no chance of going unnoticed. It’s arguably one of the most traditional instruments if you value heritage highly.

Cons: Prohibitively expensive and difficult to acquire. There are a very limited number of makers, and they’re distinct from the Scottish bagpipes. The beginner’s set – containing just the parts needed to get started playing, and pictured above – will need to be upgraded to a half- or full-set at some point. A full-set will likely cost several thousand. Also, while good pipers make beautiful music, the sound isn’t for everyone.

There are other instruments, notably the harp (or 'clársach', which is played in a different style), the bouzouki (think halfway between a guitar and a mandolin), the trad flute, or that old staple, the spoons. The instruments above, though, are the most common at any session.