"These acts go above and beyond the call of duty, are in keeping with the highest traditions of the military service, and reflect great credit on Fitzmaurice and the US army." 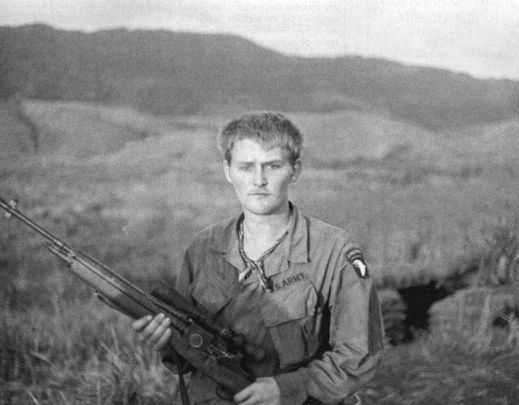 Michael Fitzmaurice, from North Dakota, was awarded a Medal of Honor for his bravery in Vietnam. CJ Clancy / Supplied

A member of the 2nd Squadron, 17th Cavalry, 101st Airborne Division, the North Dakota solder jumped on a grenade to save his brothers in arms and continued to fight throughout the night.

Michael Fitzmaurice was born on March 9, 1950, in Jamestown, North Dakota. He graduated from Iroquois High School, in 1969.

Fitzmaurice enlisted in the army in October 1969. After completing his basic training, he was assigned to the 2nd Squadron, 17th Cavalry, 101st Airborne Division. Basically, anywhere American forces were in battle, Fitzmaurice's unit were dropped into the middle of it by helicopter.

In March 1970, Fitzmaurice's unit was tasked with guarding an airstrip in Khe Sahn, when they came under continuous attack from North Vietnamese Army (NVA) forces.

"I went out on the line. When it was over, I was going to go back to bed. Well, we no more got into our bunker, than they started putting in the rockets and stuff again. I had two really good buddies, Phil and  Bill, so, Phil and  I went out to get into the fighting position and there was one of our guys who had been all blown to crap, laying on the ground. Phil and  I got into our hole. From there, they just started hammering us.

I wouldn't even be here if Phil hadn't shot a bunch, as we came out. We came running and they blew the main bunker. The other guys got buried, but Phil and I got into the fighting position and headed to another bunker."

When they reached the new bunker, enemy forces fired three grenades into the bunker in quick succession. Fitzmaurice managed to throw two away. He then dived on top of the third grenade with his flack jacket to protect his comrades from the blast.

Fitzmaurice was severely wounded and partially blinded as a result of his actions. He refused medical treatment and continued fighting the enemy. When his own riffle became damaged beyond use, he manhandled a riffle off an enemy NVA soldier and continued engaging enemy forces ferociously until dawn.

Fitzmaurice, only relented to medical treatment after the enemy had been subdued. He was flown back to America, where he endured a year of surgeries and hospitalization at Fitzsimons Army Medical Center, in Colorado.

After his discharge, he returned to North Dakota, married, and gained employment working for a meat processing plant.

On Oct 15, Michael Fitzmaurice was awarded the Medal of Honor at the White House by President Richard Nixon.

Below is the citation for Fitzmaurice's Medal of Honor:

Fitzmaurice and three fellow soldiers were occupying a bunker when a company of North Vietnamese sappers infiltrated the area. At the onset of the attack, Fitzmaurice observed three explosive charges which had been thrown into the bunker by the enemy. Realizing the imminent danger to his comrades, andwith complete disregard for his own personal safety. He hurled two of the charges out of the bunker. He then threw his flak vest and himself over the remaining charge.

By this courageous act, he absorbed the blast and shielded his fellow soldiers.  Although suffering from serious and multiple wounds and partial loss of sight. He charged out of the bunker and engaged the enemy until his rifle was damaged by the blast of an enemy hand grenade. While in search of another weapon, Fitzmaurice encountered an enemy sapper in hand-to-hand combat. Having obtained another weapon, he returned to his original position and inflicted additional casualties on the attacking enemy.

Although seriously wounded, Fitzmaurice refused to be medically evacuated, preferring to remain at his post. Fitzmaurice's extraordinary heroism in action at the risk of his life contributed significantly to the successful defense of the position and resulted in the saving the lives of a number of his fellow soldiers. These acts go above and beyond the call of duty, are in keeping with the highest traditions of the military service, and reflect great credit on Fitzmaurice and the US army.