IrishCentral contributor CJ Clancy takes a look at the life of fearless helicopter pilot Charles Kelly, who served in Vietnam and the Second World War. 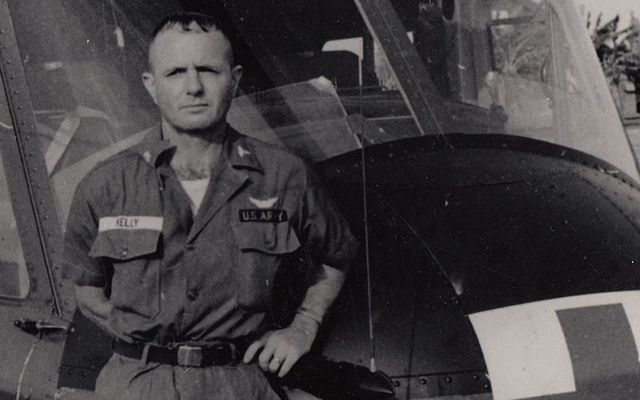 Charles L Kelly during the Vietnam War in 1964. Public Domain

"Kelly was morally and physically fearless. He had been court Marshaled three times but cared more about doing what was right than about his own career."  Patrick H Brady (Medal of honour recipient)

Born Charles Kelly on the 10th of April 1925, in Wadley Georgia, the eldest son of Charlton L and Ruth Amelia (nee Moore) Kelly. Charles' father died when he was six years old and Ruth chose not to remarry.

In 1941, fifteen-year-old Kelly dropped out of high school and enlisted in the army claiming he was born three years earlier in 1922.

Kelly went on to train as an Army medic, serving with the 30th infantry Division and was severely wounded by an artillery shell at the Battle of Aachen in Germany. He suffered a compound fracture of the fibula requiring hospitalisation from October 1944-June 1945.

After the war, Kelly returned to Georgia and graduated from high school as class president in 1947. Following graduation, Kelly enrolled at Georgia Teachers College in Statesboro, graduating with a bachelor of science in 1950 and subsequently a Master of arts in geology from George Peabody College in Nashville.

In 1951, while teaching, Kelly was offered a commission as a 2nd lieutenant in the army reserve. He received a regular army commission in the medical corps and graduated from flight school in 1954.

A report on Charles Kelly during his time at army aviation school in Feb 1960 read:

"Capt Kelly has demonstrated a remarkable ability to instruct in medical subjects. He is noted for calm aplomb, exceptionally fine build, poise & commanding voice on and off the instructional platform. He thinks very clearly, is alert to changes that will affect the instruction that is in his responsibility, and possesses a high degree of common sense."

Kelly clocked up an average of 150 flight hours a month and pioneered night rescues that army top brass concluded "too dangerous" after carrying out a study on Kelly's rescue methods.

"If we encountered a situation beyond our capability, we called Kelly, but we never left a patient on the field", said Patrick H Brady.

Kelly had stops across Vietnam totaling a 720km circuit. If any of the stops had patients, Kelly's crew loaded them onto the helicopter and proceeded on with their course unless a patient needed immediate treatment. Most nights they carried ten to fifteen patients that would ordinarily have to wait until the following morning to be rescued but for Kelly's persistence with carrying out night flights.

On the 11th of April 1964, Kelly received a mission to rescue wounded soldiers in a mountainous region near the Cambodian border. As Kelly swooped down from the night's sky towards the landing zone surrounded by tall trees, he came under attack from Vietcong forces until hovering below the treetops out of sight.

The slope on the landing area was so severe that Kelly could only precariously land one skid on the surface while waiting for ARVN troops to carry casualties up the Phnom Kto mountain. Once loaded, Kelly bolted through enemy Vietcong fire. Both casualties survived.

On another rescue, Kelly had to abort a landing due to intense enemy fire. Undeterred, Kelly made a second successful attempt against the odds. As Kelly was taking off with patients onboard, a round hit the fuel drain valve resulting in fuel spraying out.

Kelly immediately radioed the Soc Trang tower stating his helicopter was leaking fuel, that he didn't have much fuel left, and that he wanted priority landing.

Kelly was asked did he require anything else? "Yes, bring me some ice cream." The engine of his helicopter died as he was landing on the runway, with nothing left in the tank. Kelly calmly walked out of the helicopter surrounded by crash trucks and crews before the base commander walked up and handed him his ice cream.

In another mission, Kelly joined a search for a fixed-wing plane that had gone down. Kelly and his crew eventually located the crashed plane. As they circled the area discussing how to land. A round darted through the open cargo door crashing into the deckhead. Kelly responded by making a beeline for the crash area and successfully landed while taking fire from all angles. Once landed, all crew jumped out and immediately engaged enemy Vietcong in machine-gun fire while simultaneously rescuing the pilot & once again escaping to safety.

On the 1st of July 1964, Kelly was in the process of carrying out a hot landing. Kelly was advised to abort over the radio.

"When I have your wounded," replied Kelly followed by a sudden Silence. A bullet had traveled in the cargo door straight through Kelly's heart, killing him instantly. Another crew landed next to the crash site and attempted to revive Kelly to no avail.

The following day, a commander strolled in the office of Captain Patrick H Brady and flicked a bullet on his desk, and asked: "are you going to continue to keep flying so aggressively?"

Brady picked up the bullet and replied: "we are going to continue to fly exactly how Kelly taught us to fly, without hesitation, anytime, anywhere."

Major Charles L Kelly was buried with full military honours on the 15th of July 1964. Kelly was best described as "As a gruff, stubborn, dedicated soldier who let few obstacles prevent him from finishing a task."

In 2002, the documentary film "In the shadow of the blade" honoured Kelly's story.

The President of the United States of America, authorised by act of Congress, July 9, 1918 (amended by act of July 25, 1963) takes pride in presenting the distinguished service Cross (posthumously) to Major Charles L Kelly, United States army (medical corp) for extraordinary heroism in connection with military operations involving conflict with an armed hostile force in the republic of Vietnam, while serving as aircraft commander of the 57th medical detachment, on the 1st of July 1964. Major Kelly demonstrated exceptional courage, strong determination, & complete disregard for his own personal safety while participating in an aerial medical mission to evacuate wounded soldiers from an area under heavy attack from hostile forces. With unique professional skill & full knowledge of intense ground fire & the immediate proximity of the enemy, landed the unarmed helicopter ambulance close to the wounded men in the exposed area. Although the ground advisor warned him of the grave danger & recommended departure. Major Kelly refused to leave without the wounded soldiers & succeeded in loading them aboard the helicopter moments before he was mortally wounded by hostile gun fire. Major Kelly's extraordinary heroic action, valiant efforts, & deep concern for his fellow man are in the highest traditions of the United States army medical service, & the armed forces of his country.