There’s nothing quite like heading out for the day with a metal detector. It's exciting to think it might be the big one this time - who knows what lies beneath the soil, sand, and waves? 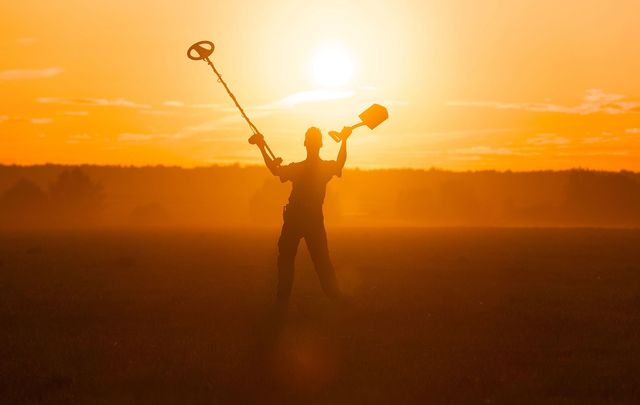 There’s nothing quite like heading out for the day with a metal detector. It's exciting to think it might be the big one this time - who knows what lies beneath the soil, sand, and waves?

Ireland is rich in history. We've inhabited this land for thousands of years and we’ve left a trail of objects, buildings, and burials along the way.

The laws around metal detecting are strict in Ireland, but some staggering finds have been uncovered none-the-less.

Here are the most incredible metal detecting finds in Ireland to set your pulse racing.

In 2014 Barry Shannon found a 7th century golden fish in his aunt’s Ardglass field. The ornate three-inch long fish head was buried a foot beneath the soil.

Experts think its part of a belt buckle from the early medieval period, but it’s not of Irish origin - specialists from Cambridge University have identified the find as Anglo-Saxon.

The Anglo-Saxons didn’t settle in Ireland, so this treasure was probably the result of trade or of early Christians spreading faith between England and Ireland.

An intricate bulla was unearthed with a metal detector on farmland outside Downpatrick in 2008. This tiny golden locket from the Bronze age dates to 800BC.

The bulla measures only 3 centimetres but its intricate decoration means it was a highly prized item both then and now. There have only ever been seven found across Ireland.

Experts think a bulla was threaded with a leather strap and worn as a sacred necklace.

It took Brian ten years to find something special, but he did it in style. The coins were Hiberno-Manx coins circulated during the 11th century - the first of their type found in Northern Ireland. Other Hiberno-Manx coins have been found in Scotland and the Isle of Man.

Experts think the coins may have been taken from a nearby monastery during Viking raids or perhaps signify peaceful trading partnerships of the age.

Not quite what the detectorist was looking for. In 2013 a stash of 16 semi-automatic weapons and 800 rounds of ammunition were found in woodland on the Lisnabreeny estate, which is a National Trust property to the east of Belfast.

Not many details were released to the public about this discovery, but it certainly ranks as one of the more disconcerting finds in Ireland.

Found by Tom Crawford in Brickland, Co Down the small ingot of Viking gold dates from the 9th and 10th centuries and is very rare. Not a lot of Viking gold has been discovered in Ireland so the three-centimeter long sliver is important to historians.

It’s thought the gold may be linked to the early medieval kingdom of nearby Loughbrickland which was raided by Vikings in 833AD.

Brian Murray found not one but two gold Roman rings along with a silver buckle with his metal detector on Murlough Beach in Co. Down – but he was actually looking for WW2 relics left by American training forces when he stumbled across the ancient finds.

The jewellery dates to the 4th or 5th century AD, and interestingly experts think they may be the only remains of a body that found its way into the sea all those years ago.

The magnificent Ardagh Chalice, c. 9th century in date, it was found in 1868 by two boys digging potatoes pic.twitter.com/aSX6gfNAFF

One of Ireland's most famous treasures the Ardagh Chalice was discovered buried in Reerasta near Ardagh in 1868.

It was discovered along with other pieces which led to its classification as a hoard. The chalice is the most elaborate piece and was most likely used to dispense wine during mass.

Experts say the amazing horde dates from the 8th or 9th century which is when Viking raids were prevalent against the church.

Two teenage boys found the pieces as they were digging for potatoes. They were hidden beneath a single slab of stone. The hoard was sold to the Catholic Bishop of Limerick for £50 and today is worth many millions. Today you can admire it on display at the National Museum of Ireland.

The history of the Tara Brooch, one of Ireland's greatest treasures, explained: http://t.co/pYYq7IRyuQ pic.twitter.com/pwHfOuEwfj

Found in Bettystown Co. Mearth in 1850, the Tara Brooch dates from 650-750 AD and is another of Ireland’s precious treasures.

This pinnacle of Irish workmanship was unearthed on the beach by a peasant woman, although there are some who suggest she found it on farmland but didn’t want to hand it over to the landowner! She sold it to the jeweller George Waterhouse who named it after the Hill of Tara where the seat of the High Kings for Ireland was traditionally situated.

The Tara Brooch is made from cast and gilt silver and decorated elaborately with animal carvings, amber, and enamel. It is truly beautiful and on display in the National Museum of Ireland .

A hoard of 400-year-old gold coins

In 2013 a hoard of 81 gold coins was discovered by construction workers lifting the floorboards of an old pub on Main Street in Carrick-On-Suir.

The coins date from a difficult period in history - the end of the Cromwellian war when Catholics were under threat. They are thought to be the savings of a 17th-century merchant who was most likely Catholic and preparing to flee Ireland.  They are Guinea coins of almost pure gold that were viable tender in America and Europe during the time.

Good choice! .... and then you see the full Broighter Hoard! #whatafind pic.twitter.com/vMnnzlRIQK

Found in 1896 by a farmer ploughing his field this huge stash of golden Iron Age objects was discovered in Broighter, Limavady adjacent to the shoreline of Lough Foyle.

The hoard is comprised of an 18cm golden boat, two twisted bar torcs, two necklaces, a beaten bowl, and a decorated buffer torc.

The horde was badly damaged by ploughing and some pieces may have been washed down the drain by the men eager to see what they had found. Experts think it may have been a votive offering to the gods due to the nautical theme and proximity to water.

Although the Ardagh Chalice, Tara Brooch, The Broighter Horde and others were discovered by pure luck, similar metal finds are no doubt out there and more metal detector discoveries are probable.

Which leads us to the Derrynaflan Hoard...

You can see the Cross of Cong in the @NMIreland on Kildare St, Dublin. There you’ll also find the Derrynaflan Hoard, The Ardagh Chalice & the Tara Brooch & explore the beauty of medieval Irish metalwork in depth. Go see it! pic.twitter.com/6RIkgifBtg

The Derrynaflan Hoard is one of Ireland’s finest treasures It was unearthed in Killenaule, Co Tipperary in 1980 and is classed as one of the most important archaeological finds in Ireland.

It’s comprised of a silver paten, a hoop, a strainer, and a bronze basin, but the magnificent chalice takes center stage. It was most likely hidden during Viking raids of the 10-12th century by inhabitants of the early medieval monastery close to the find site.

Despite being valued at £5.5 million Michael Webb and son Michel Junior were only awarded £55,000 because they did not have permission to detect or dig on the archaeological site which was protected with a preservation order.

Their court case changed the law surrounding metal detecting, strengthening it against opportunists that may damage Ireland’s rich archaeological history for private gains.

If you fancy trying your luck with a metal detector you must have the right paperwork. It’s against the law to search for archaeological objects unless you’ve written permission from the Minister for Arts, Heritage and the Gaeltacht.

Modern-day detectorists are campaigning for a change in the law, so more finds like the ones above can be unearthed and displayed to the public, but for now, if you want to spend some time metal-detecting you’ll need to search on private land.

Always obtain written permission from the landowner and report your finds in case they are classed as treasure.

Ireland is a rich source of history and ancient valuable finds no doubt lie beneath the surface right at this moment. It’s thrilling to think what could still come to light given the amazing treasures that have been stumbled across so far.