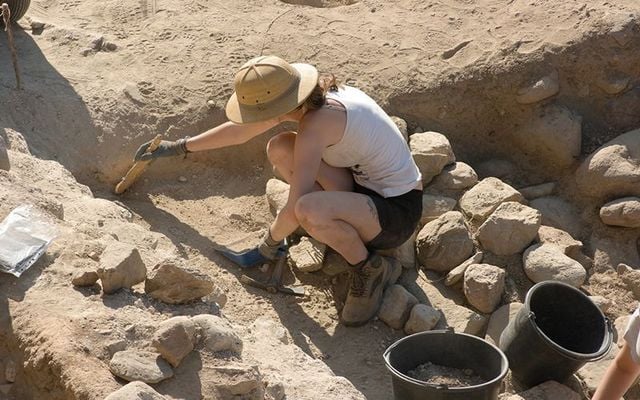 Pottery, animal bones, seeds, nuts, and more tell a tale of what everyday life was like in medieval times in a monastic settlement in Ireland.

Armed with two-meter COVID-19 sticks, to ensure they were socially distanced, a team of archaeologists unearthed a wealth of artifacts, dating back to the 13th century at the Beamore dig, in East Month, just outside Drogheda. Among the rare finds was evidence that the Cistercian monastery included a sourdough bread bakery and a communal toilet along with its own air-freshening pot.

The four-week dig was lead by Matthew and Geraldine Stout who revealed that sourdough bakery was significant as it allowed the team to decipher just how many monks inhabited the site, once the home of a unique Cistercian community, from Normandy in France. This monastic farm is associated with the French Cistercian foundation of De Bello Becco (Beaubec).

A previous dig at the site had unearthed 13th-century French jugs, roof tiles, a corn drying kiln, and dried peas. This proved that the residents practiced crop rotation.

The site also included a gatehouse, suggesting a diagonal French buttress. This was described as very rare, if not unique in Ireland.

During this year's dig, which ended in August, experts unearthed a medieval key,  bones from cows, sheep, cats, and dogs along with mixed farm products such as peas, beans, oats, wheat, and rye. Imported fruits such as grapes and figs from France also showed that the monks practiced mixed farming.

A timber dash-urn with a paddle used to churn butter, also proved that these monastic farmers were self-sufficient.

Dr Geraldine Stout speaking on the @BeaubecE dig which I was lucky to take part in last summer. Beamore was a monastic grange farm owned by the Cistercian abbey of Beaubec in Normandy. Lots of interesting finds & plenty more to discover! (1/3) pic.twitter.com/3qLM0Hhsag

"We found a cellar in the ruins which suggest it could possibly have been used for toilet facilities as well as a pot that worked like a medieval air freshener.

Explaining the significance of the sourdough bakery Geraldine Stout said "There were between 30 and 50 monks living here. The smallest Cistercian settlement had 12 monks minimum and this is a more sizable community, looking at the scale of the building here.

"We know that each monk was given a loaf of bread for his day's work so if we work out mathematically the size of the oven and how many loaves it could hold, it would suggest how many monks lived here.

"We were lucky to find waterlogged deposits which preserved a lot of timber and seeds for us so we can tell by the flat oats and cereal that the Monks made and ate sourdough bread."

Ahead of the dig, Geraldine spoke to the Drogheda Independent. She said "We know from last year that a community of monks came over from Normandy in 1201 to set up a farm, and the great thing about the Cistercians is they have a template for a farm, and no matter where they went in Europe, the farm is the same.

"So, we know we have a central courtyard, farm buildings, and all around that a water supply, so when we excavated last year, we found a residential block, where the community of around 50 monks lived - they would have eaten together, slept together, prayed together."

This year's dig also allowed the team to push back the dating of the settlement due to the discovery of a prehistoric ceremonial pit circle and stone tools found beneath the medieval monastic settlement.

The excavations were the second of a €50,000 three-year project, funded by FBD Trust and administered through the Kilsharvan Community Council.