The urn is about 4,000 years old and is undergoing conservation work in Dublin. 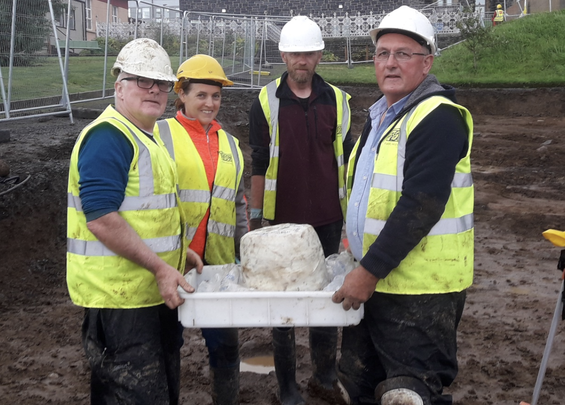 Fadó Archaeologists unearthed a Bronze Age urn, while digging on the site of a new Donegal hospital. Twitter / FadoArchaeology

Archaeologists have uncovered a 4,000-year-old Bronze Age burial urn in County Donegal as part of a series of very important archaeological finds in Ballyshannon.

The urn was found during the excavation of a site where the Health Service Executive plans to build a €21 million community hospital and was carried out by Fadó Archaeology.

The dig had originally revealed a Bronze Age burial capstone with rock art before the urn was discovered in a small ring ditch nearby.

Susannah Kelly, a specialist archaeological conservator, was brought in to safely remove the urn given its delicate nature and the risks posed by touching it for the first time in roughly 4,000 years.

Kelly wrapped the urn in cling film and then applied resin bandages to protect the artifact before it was removed from the earth.

The urn was then removed to Dublin where Kelly will work on its conservation.

An osteo-archaeologist, who studies skeletons removed from archaeological sites, will also examine the contents of the urn to try and find out more about the person buried at the site in Donegal.

Tamlyn McHugh, Executive Director of Fadó Archaeology, said that the rare discovery was an opportunity to find out more about Ireland's ancient history.

A Bronze Age urn was brought to the surface today around 4000 years after it was buried in Ballyshannon, Co Donegal. It was discovered during an excavation of the site of a new community hospital | https://t.co/XSk2MNGKRI pic.twitter.com/TVwgvLeUB9

She also said that the discovery was a reminder of the importance of carrying out archaeological digs before on major development sites.

She said that her archaeological team found a number of Bronze Age burial items at the site in addition to the 4,000-year-old urn.

Meanwhile, Shane Campbell, Estates Manager for the HSE, said that the HSE was delighted with the discovery and said that the dig will not affect the development of the new community hospital at the site.